Videos circulating on social media show Josie Mulvihill, 18, being pulled to the ground and arrested by an Iowa State Trooper inside the Capitol. 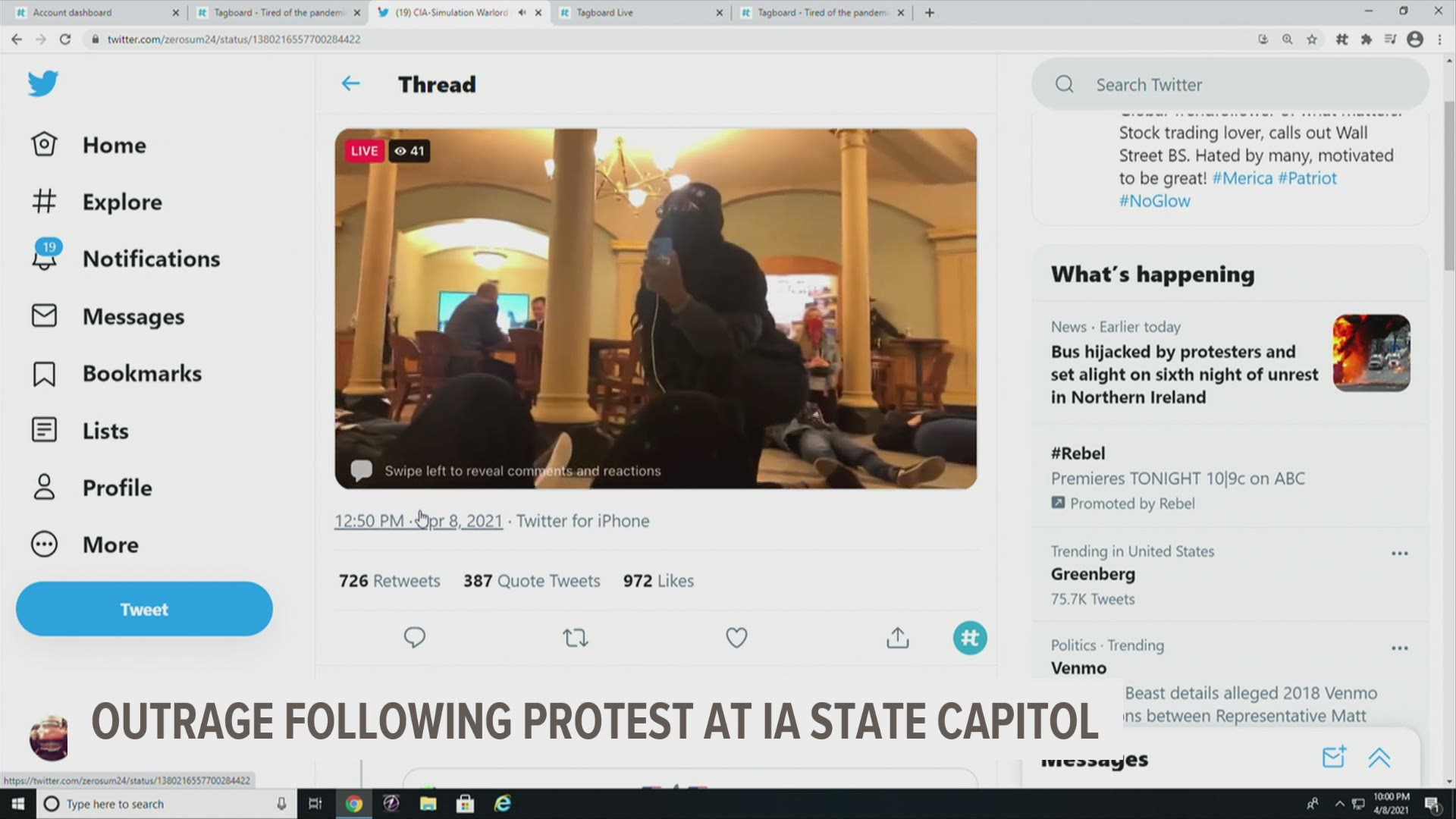 DES MOINES, Iowa — Black Liberation Movement activists and the Iowa State Patrol clashed at the Capitol Thursday afternoon, resulting in a Norwalk high schooler being dragged to the ground and arrested on the first floor of the rotunda.

The protest was organized by Advocates for Social Justice, a group based in Cedar Rapids. They deemed several bills in the legislature to be "racist and dangerous."

DSM BLM reported around three dozen community members gathered inside the Capitol building on the first-floor rotunda to protest. The area is a public space, and videos posted on Twitter and Facebook show demonstrators were acting peacefully.

We will not be intimidated by law enforcement or those seeking to destroy our movement. We will continue to uplift, support and fight for the liberation of ALL Black people. pic.twitter.com/0XL1aE1j4q

One video posted by Cortez Rice shows the demonstrators move from outside the Capitol to inside. Rice calls himself a nephew of George Floyd, the man who died during a confrontation with Minneapolis police last summer. Rice is not a blood relative.

Demonstrators walked through the public entrance at the front of the Capitol, with troopers watching them as they moved their protest inside.

Chants changed from "these racist cops have got to go" to "this is what democracy looks like."

Then, protestors laid on the ground for nine minutes and 29 seconds, which is how long Rice's uncle was pinned to the ground before he died last May. Chants continued through this time.

After the time was up, protesters got back up to continue through their protest, chanting "kill those bills."

Over an hour into Rice's live stream is when the arrest of 18-year-old Josie Mulvihill happened. She appears on-camera asking troopers for their badge numbers as chants continued.

Then, a commotion starts near Mulvihill and another unidentified protester. It's not caught on Rice's stream, but this is when Mulvihill allegedly assaulted the trooper, who DSM BLM identified as DJ Hernandez.

The situation escalates quickly in the video, when the officer pulls out a set of handcuffs and brings Mulvihill down to the ground. Other protesters attempt to pull the trooper off of her as other troopers start pushing them away.

Officers pulled her away from the rest of the group as protesters question the troopers why they're arresting her.

In Rice's video, he called out Hernandez's badge number and last name. Protesters crowded around the trooper vehicle where she was detained.

Local 5 reached out to the Iowa State Patrol for comment. Here is their response:

"Josephine Pearl Mulvihill, 18 years old was charged with assault on a peace officer from an incident at the State Capitol today.  She was cited and released to parental supervision.

The Complaint and Affidavit will be available once it has been filed with the court."