Gov. Reynolds said she was calling out Greenfield's lack of travel across the state during the Senate campaign. 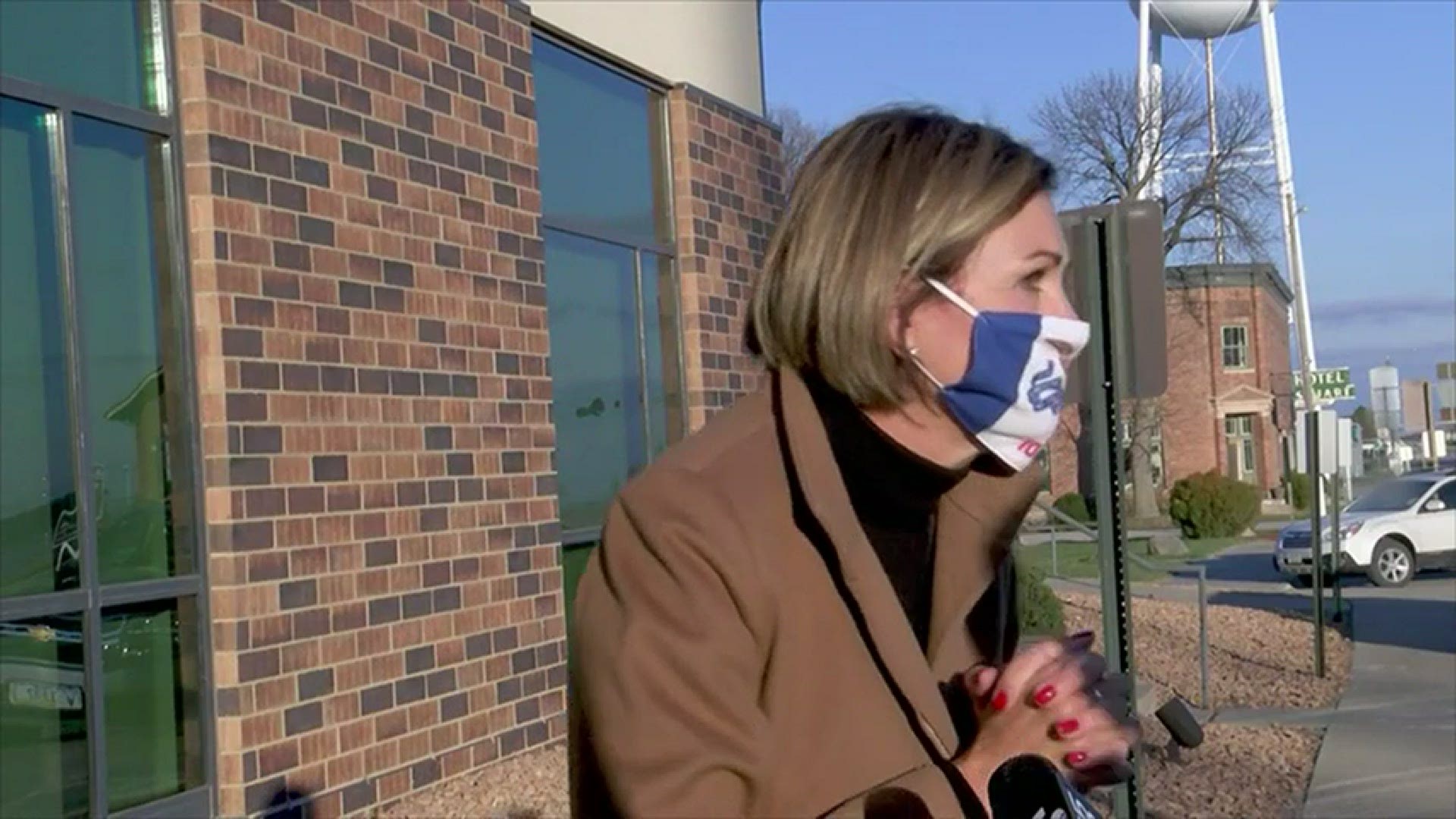 STUART, Iowa — Gov. Kim Reynolds said she was not mocking Democratic Senate candidate Theresa Greenfield when she questioned Greenfield's decision to temporarily pause her RV tour because one of her staff members came into contact with a person who later tested positive for COVID-19.

At a media availability in Stuart on Thursday night, Reynolds said she was making a broader point about Greenfield's campaign strategy.

"She never got on the campaign trail, so that's what I've been saying," said Reynolds. "I've said you know, Joni has been all over the state, the 99 counties."

O.Kay Henderson with Radio Iowa interrupted the governor, pointing out Greenfield came off the campaign trail because of a possible coronavirus exposure and to get tested.

"I'm sayin' she never got on it, Kay," said Reynolds. "That's what I have been saying consistently. You know, Iowans expect..."

Again, Kay pointed out Reynolds' remarks at a Republican campaign event in Bondurant where she mocked Greenfield.

"I did not make fun of her," said Reynolds. "I said all along, and I said she was on it, and she's off. And that tied in what I have been consistently saying. We have $120 million dollars that is being pumped into this state, and it's not from Iowans. It's from the east coast and the west coast. Iowans expect that the people that are asking for their vote and the opportunity to represent them either at the local level or the state level or in Washington, D.C., you ought to be able to go out there and talk about what's important to you, what's your vision."

Honk if you’re ready to #FlipTheSenate!

What a great event in Winterset. We can do this, but we can’t take our foot off the gas. Join our team: https://t.co/aSBXuirOSN #IASen pic.twitter.com/vHwu9bL9jE

Meanwhile, Reynolds has not held a televised, public press conference since Oct. 7. Local 5 asked her why she hasn't appeared in front of Iowans as the number of coronavirus cases continues to increase and hospitalizations hit record highs day after day in October.

"I'm not stopping holding press conferences," said Reynolds. "I've been traveling across the state and really reaching out to Iowans. We've got increased numbers across the state and I want to make sure my message is targeted to Iowans. I was up in Sioux City in northwest Iowa we had every single media market there., I had an opportunity to talk to the people there. So it's not just about this media market. This is an opportunity to get out in the state to where I'm traveling. I've been doing a lot of radio, I've been trying to remind peopel that we are all in this together..."

But hosting media availabilities after events is not the same as a scheduled, televised press conferences available live to millions of Iowans.

You can watch the entire media availability at the Stuart stop below. 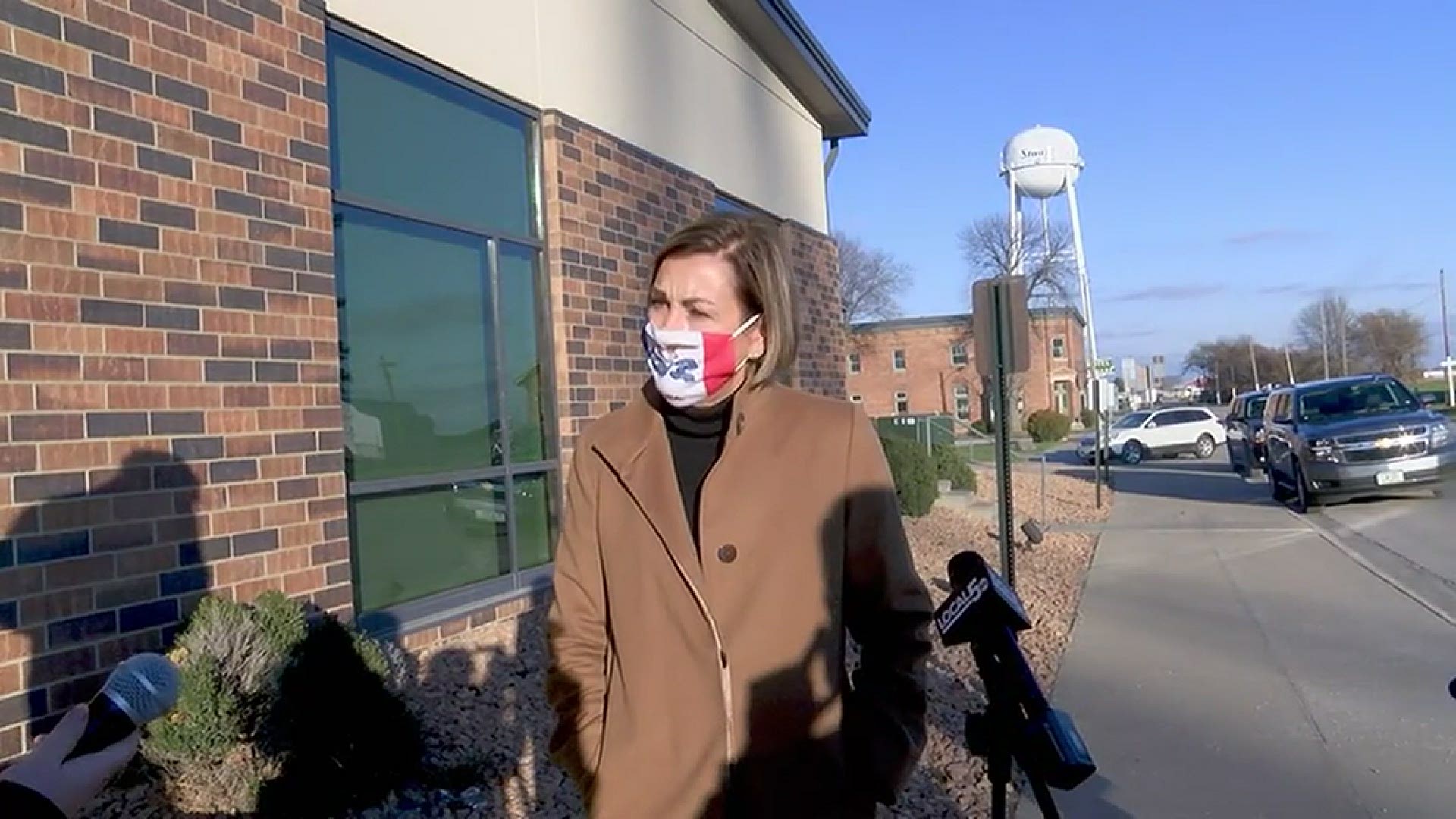