The Disaster Divide, Part I: A Call of Desperation

Three weeks after the derecho, one of Cedar Rapids' most vulnerable populations still struggles to recover, and one Des Moines woman has dropped everything to help.

CEDAR RAPIDS, Iowa — The earlier hours of the morning of August 10, 2020 were quiet; the sun was peeking out behind the clouds as a light breeze brushed across the skin.  But in a matter of minutes, everything changed.

The sky turned black. Rains pelted the ground as the winds raged, ripping off rooftops and tearing trees up from their roots.  It was over as quickly as it had begun, but the damage was done.

Silence filled the air; the scope of the devastation had rendered the people of Cedar Rapids speechless.  There was nothing to say, but so much work to do.

The silence quickly yielded to the revving of chainsaws and the whirring of generators.  The time had come to pick up the pieces, and then rebuild.

After five days of neighbors helping neighbors in true Iowa fashion, Nancy Mwirotsi, a Des Moines native, got a call of desperation.  Based on what she'd seen, Nancy thought the damage was mostly limited to trees.  But what she discovered was far more than any chainsaw could fix. 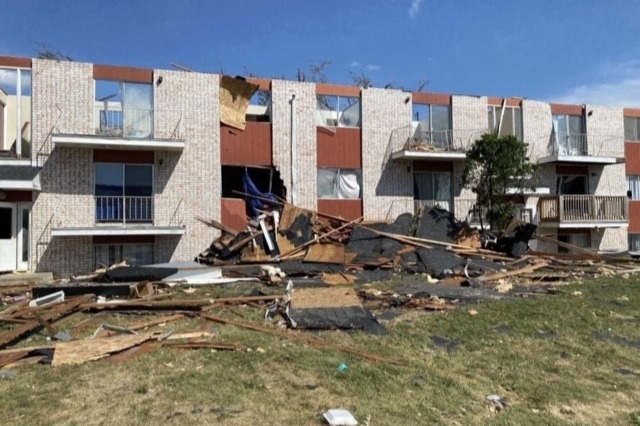 120 hours after a derecho swept through our state, hundreds of our fellow Iowans were living in tents, not knowing where their next meal would come from; or if it would come at all.

The hope and dignity of Iowa's most vulnerable was now lying somewhere among the debris, nowhere to be seen.

After that, Nancy started the daily routine of loading the car with supplies and friends, and driving two hours to Cedar Rapids' southwest side, which was hit particularly hard.

The hardest-hit apartments house Midwest natives who never left, growing up and continuing a crippling cycle of poverty.  Others are refugees who came to escape bad living conditions to begin with, only to be thrown back in in the blink of an eye.

With such a population comes language and cultural barriers, which made getting the proper aid and resources a challenge.

Things we take for granted, such as reading a sign in English, became the difference between sleeping inside or out.  For Nancy, that hit home.

"It was very personal, because we always have this imagery of what Africa looks like. And unfortunately what you see on TV is not really the true Africa," Nancy said.

"Africans are humans.  I believe that God says we're all created equal, but seeing that... it always reminds me of what I always see on TV.  I am African, and I made it.  But there are people out there that look like me, and nobody is speaking up for them."

So that's exactly what she did; she spoke up for anyone she could and started working alongside volunteers at the Intercultural Center of Iowa.  According to them, these living conditions were poor before the storm even hit.

"The derscho exposed the hole to the existing system," Intercultural Center of Iowa Founder Rama Muzo said.  Clearly we were not prepared as a community, as a city."

Muzo said the people in those buildings already had some major disruption in their lives because of the pandemic.  Essential workers at meat packing plants continue to go back to work - even those now without homes.

"They continue to work and support the whole food distribution and that stuff," Muzo said.  "Even now! They still work! We have transportation picking them up from the shelter to go to work. So if this is what they have actually given to us, why can't we improve their quality of living?"

Three weeks after the storm, the Iowans affected are living in hotels, but their time is running short.  Now, volunteers like Nancy and Muzo have until Saturday to help them figure out what's next.

"I don't know what the long-term solution looks like, but there needs to be somewhere where people are not going back into poverty."

A GoFundMe has been started to help the refugees and immigrants impacted hardest by the derecho.  As of 2:00 a.m. Tuesday morning, it had raised $3,825.  To donate, click/tap here.

You can also find out how to donate/help in other ways by emailing helpcedarrapids@gmail.com.

RELATED: The Disaster Divide, Part II: Only One Hour