'Together we can get through this': Reynolds urges Iowans to 'do their part; New relief announced for small businesses

Here's what you need to know from Gov. Kim Reynolds' press conference Wednesday. 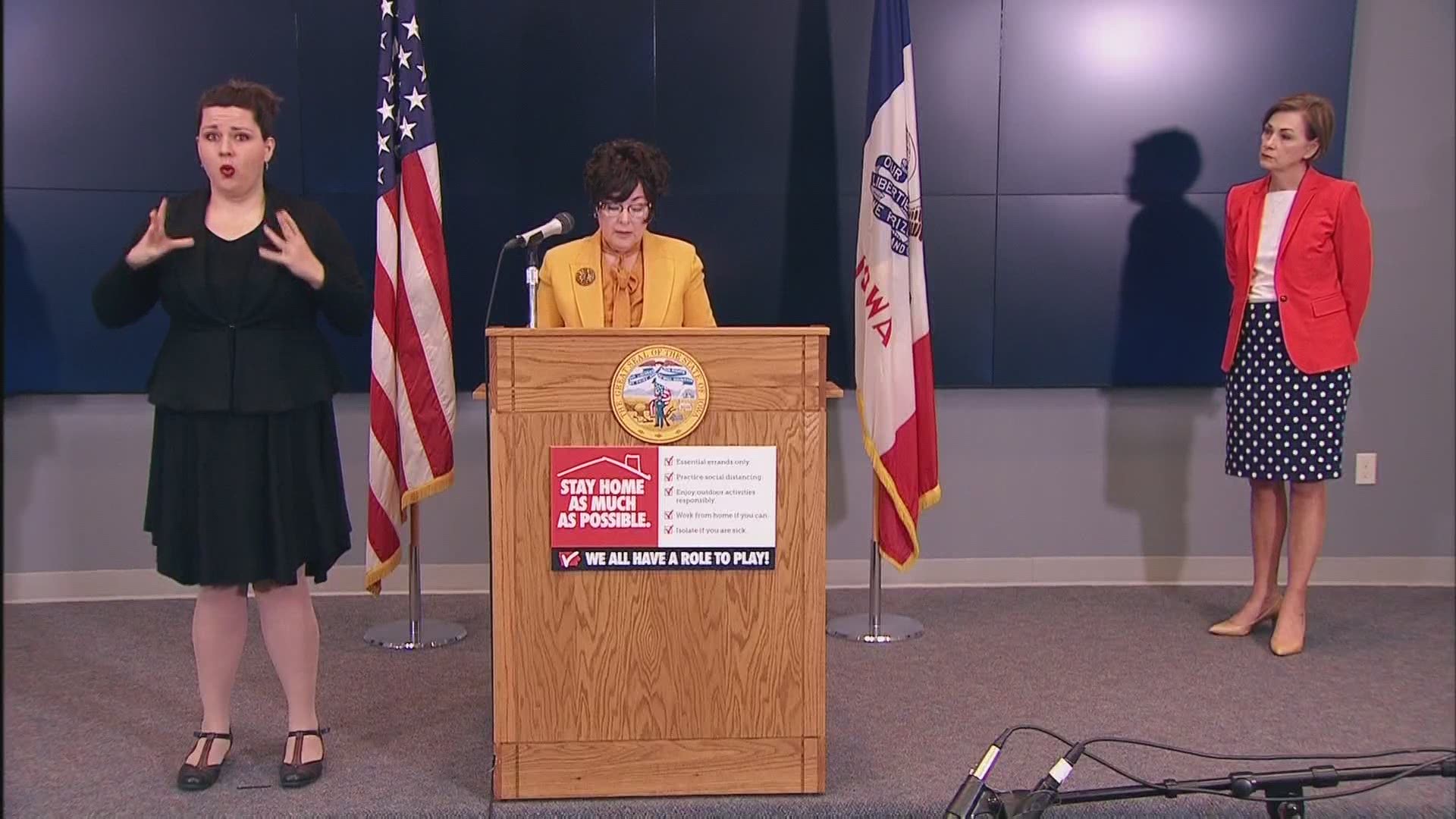 Gov. Kim Reynolds announced that Iowa is expanding the Small Business Relief Program from $4 million to $24 million to help businesses stay afloat through the COVID-19 crisis.

The announcement was made during her daily press conference Wednesday.

Reynolds also announced an additional 97 positive cases of COVID-19, reaching a total of 1,145 confirmed cases in the state.

Worth County confirmed its first case: 79 out of Iowa's 99 counties have positive cases as of Wednesday.

122 Iowans were hospitalzied due to the coronavirus as of Tuesday evening while 12,821 tests have returned negative. The State Hygienic Lab has 1,329 tests available.

The Iowa Department of Public Health confirmed another Iowan died from COVID-19 complications. They were an elderly adult (81+) from Linn County. Gov. Reynolds did not announce the death at her press conference.

Reynolds did say that 431 Iowans—38%of all positive cases in the state—have recovered from the virus.

"As we see our rates of domestic cases and hospitalizations decrease over time, we'll begin dialing up our economic response efforts," Reynolds said.

Just two weeks ago, Reynolds announced Iowa's Small Business Relief Program would provide a one-stop-shop for Iowa businesses to find assistance through tax deferrals and grants to assist them with short-term cash flow. At that point it was just $4 million.

Since then, the Iowa Department of Revenue (IDR) has received 5,700 tax deferral applications. It expects to approve another 2,300 this week. Reynolds said they'll continue to look through the rest.

All applicants in good standing with the IDR will be approved and notified by mail, Reynolds said.

"When a deferral is granted taxpayers will have 60 days from the original due date to pay their balance due penalties and interest will be waived for those 60 days," Reynolds announced.

The application process will be opened through April.

That's at least 15 businesses in each county, according to the Iowa Economic Development Authority (IEDA) Director Debbie Durham.

"Today, I'm expanding the program from its original $4 million to $24 million, which will be provided through the State Economic Emergency Fund and the Iowa Economic Development Authority," Reynolds declared.

When asked where exactly this money is coming from, Reynolds said her chief of staff talked with U.S. Secretary of Treasury Steven Mnuchin earlier on Wednesday.

Reynolds is expecting rules and guidance for that to be coming in sometime next week. She said they are also looking to the CARES Act to determine how to spend the money.

"I am pleased to announce the first round of funding will assist more than 200 restaurants, bars, breweries that have been impacted by the COVID-19 pandemic," she said.

Durham said her team has been working hard to make sure each business gets what they deserve.

"Our team at the Iowa Economic Development Authority has been working tirelessly behind the scenes to assist as many of our small businesses, as possible, as they have closed their doors, or have seen revenues dramatically drop," Durham said.

"To our small business owners, we heard you," Durham said. "We heard every one of your stories about your family's businesses, or your new venture. We heard it in your voice. We saw it in your detailed emails, and we witnessed it in your applications."

Durham reminded those tuning into the press conference that this program was designed to be short-term stopgap funding until federal resources were identified or became available.

503 email award notifications have gone out to business owners so far this week, more will be sent out as the week progresses, according to Durham.

Businesses that have been impacted by COVID-19 are advised to visit iowabusinessrecovery.com for information about all of the programs and resources that the IEDA or other agencies have available.

Gov. Reynolds took some time during her press conference to discuss Regional Medical Coordination Centers, or RMCCs, again on Wednesday.

On Tuesday, the governor and Maj. Gen. Ben Corell, Adjutant General of the Iowa National Guard, explained exactly what RMCCs are meant for.

"In short, RMCCs help facilitate multi-agency and civilian-partner communication, critical information sharing and coordination of healthcare-related resources across the regions that they serve," Corell said Tuesday.

On Wednesday, Reynolds took a further look at Region 1 and Region 2.

Region 1 contains the Des Moines metro and other parts of central Iowa. This is the current data:

Region 2 is in north-central Iowa. This is the current data:

At this time, patient volume is manageable and resources are in good supply for these regions, Reynolds said.

"You may have noticed that the number of beds and ventilators is significantly less in Region 2 compared to the other RMCC regions," Reynolds acknowledged. "North central Iowa has a much smaller population. The hospitals in those counties are smaller, and they have fewer resources than hospitals in more urban areas of the state."

Reynolds said that in the case where Region 2 would need more resources, the RMCC would facilitate getting that equipment to them.

She's optimistic about these numbers.

"We are always preparing for the worst but I am somewhat optimistic. We still haven't peaked yet, we're anticipating that at the end of this month, but again, only 10 percent are hospitalized right now so that's a fairly good number," she said. "I think the number that gives us a lot of hope is that 38 percent of all positive cases have recovered."

Sarah Reisetter with the Iowa Department of Public Health says they are continuing their work with the University of Iowa to create an accurate projection model.

Iowans need to practice social distancing if they aren't already

Reisetter said that the most important thing for Iowans to do is follow CDC guidelines of social distancing, practicing good hygiene and staying home if they are able to.

"That's the way that we're going to slow the spread of the virus in our state and make sure that our hospitals and our health systems have the capacity to deal with patients who do become more seriously ill," she said.

Reynolds chimed in saying that this is how we can make sure our healthcare workers on the front lines are able to do their job and save lives.

"So the more that every Iowan does their part, by really being responsible you are helping save lives and you are helping protect our health care workers that are taking care of those most vulnerable Iowans that are in the hospital," Reynolds said.

"But for those few that maybe aren't, do your part. We can do it and together we can get through this," Reynolds stressed.

Reynolds also stressed the need for Iowans to go outside when they can. When asked if Iowa is planning on closing trails, Reynolds said she hopes that's not true.

Reynolds also clarified that groups of 10 or more shouldn't gather under any circumstances, that includes inviting people into your home.

Even if it's less than 10 people, Reynolds said you shouldn't gather with anyone that isn't part of your household.

Reynolds even said that even though it's Easter this Sunday, her family won't be gathering at her house. Instead they'll be celebrating with eachother over Zoom.

"We're using social media to to connect, but you know we're not getting together with my family either because we need to do everything we can to stay at home," she said.

Why are we seeing more hospitalizations?

"The the intent of that is really so that we have... more timely information about our number of hospitalized patients," she explained. "And previously, some of them are still pending investigation by local public health agencies and so we also wanted to have more timely understanding of what our hospitalization rates were."

Reisetter said this is because they're different in a sense because of how residents live their lives.

In a long-term care facility, residents generally live in close proximity while residents in independent living facilities may live in apartments away from each other.

"It's not that we don't follow up and provide guidance and assistance to independent living facilities or assisted living facilities," Reisetter said. "But when we're reporting a long term care facility outbreak, it's more in terms of your traditional nursing home where we have a number of patients that are living in close quarters with one another."