'We love her': family of missing De Soto teen pleads for her safe return

Lillian Dhabalt, of De Soto, has been missing since 2:00 a.m. Saturday, according to police. 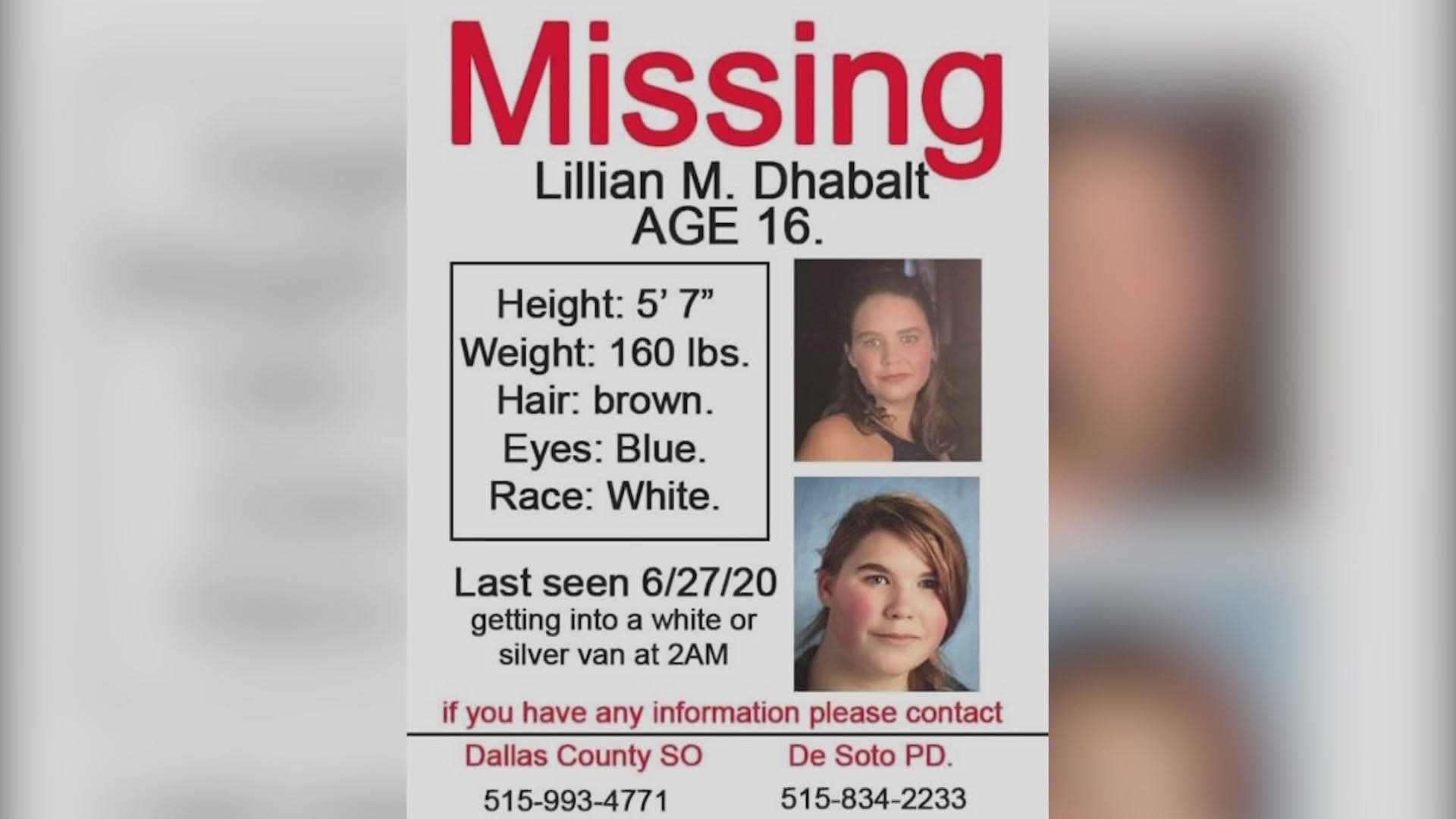 DE SOTO, Iowa — Each day that passes by gets more painful for the family of Lillian Dhabalt.

"We're all just waiting for the phone to ring," said Lillian's aunt, Jenna Dhabalt. "We have no answers...it's confusing, and we're just clueless."

De Soto police say 16-year-old Dhabalt was last seen at 2:00 in the morning Saturday, and report that she got into a white or silver van. Her aunt Jenna says the whole situation is very unlike her niece Lilly, who the family often refers to as simply "sis."

"All we know is she was seen getting into this van at two o'clock and she never showed up back home," said Jenna. "She's never done this before."

Jenna says Lilly is part of a tight-knit family in De Soto.

"We're a very tight, small family," said Jenna. "We're all there for each other. We're together every Sunday for dinner at [Lilly's grandma's house]."

Jenna describes her niece as quiet, funny, and creative.

"If you had an idea in your head for her to draw, she could do it," said Jenna. "She could pick up a piece of clay and make a beautiful rose. In fact--the weekend before she just made me one."

Jenna says her only guess is that Lilly could have left thinking she would have gone to go have fun.

"I mean I could think that maybe you're sixteen and you think you're gonna go have fun, but you're gonna come home," said Jenna.

The National Center for Missing and Exploited Children receives 30,000 reports of missing children a year, according to Exec. Dir. of the Missing Children's Division, Alan Nanavaty.

"Ninety percent of our reports are those individuals that could be classified as running away or missing, but we look at them as endangered runaways," said Nanavaty. "The reason for that is we see that a certain percentage of these children might be enticed or recruited or into sex trafficking or enticed on the internet, whether it's through an app or through a social networking site."

National Center for Missing & Exploited Children
"Our prayers have been answered and our precious Julia is safe. She ... showed up at a grocery store in Louisville, Kentucky this morning and asked an officer to call her mom and dad. We want to thank everyone who cared about Julia and shared her story.

"It really is a concern to the general public any time a child is either not where they're supposed to be or with a responsible adult with whom they know," said Nanavaty.

NCMEC's sevices, which include family victim support and missing children posters distributed and pushed digitally, are provided for free, funded by a national grant from the U.S. Department of Justice as well as private donors. They also have a cyber tipline and a 24-hotline, 1-800-THE-LOST.

"The more we can make the public aware, the public serves as the eyes and ears for law enforcement," said Nanavaty.

Lilly's aunt Jenna says she can't bear to think what may have happened to her 16-year-old niece who she considers a friend.