DES MOINES — A West Des Moines couple has been charged following an investigation into their unregistered, in-home day care by the Iowa Department of Human Serv... 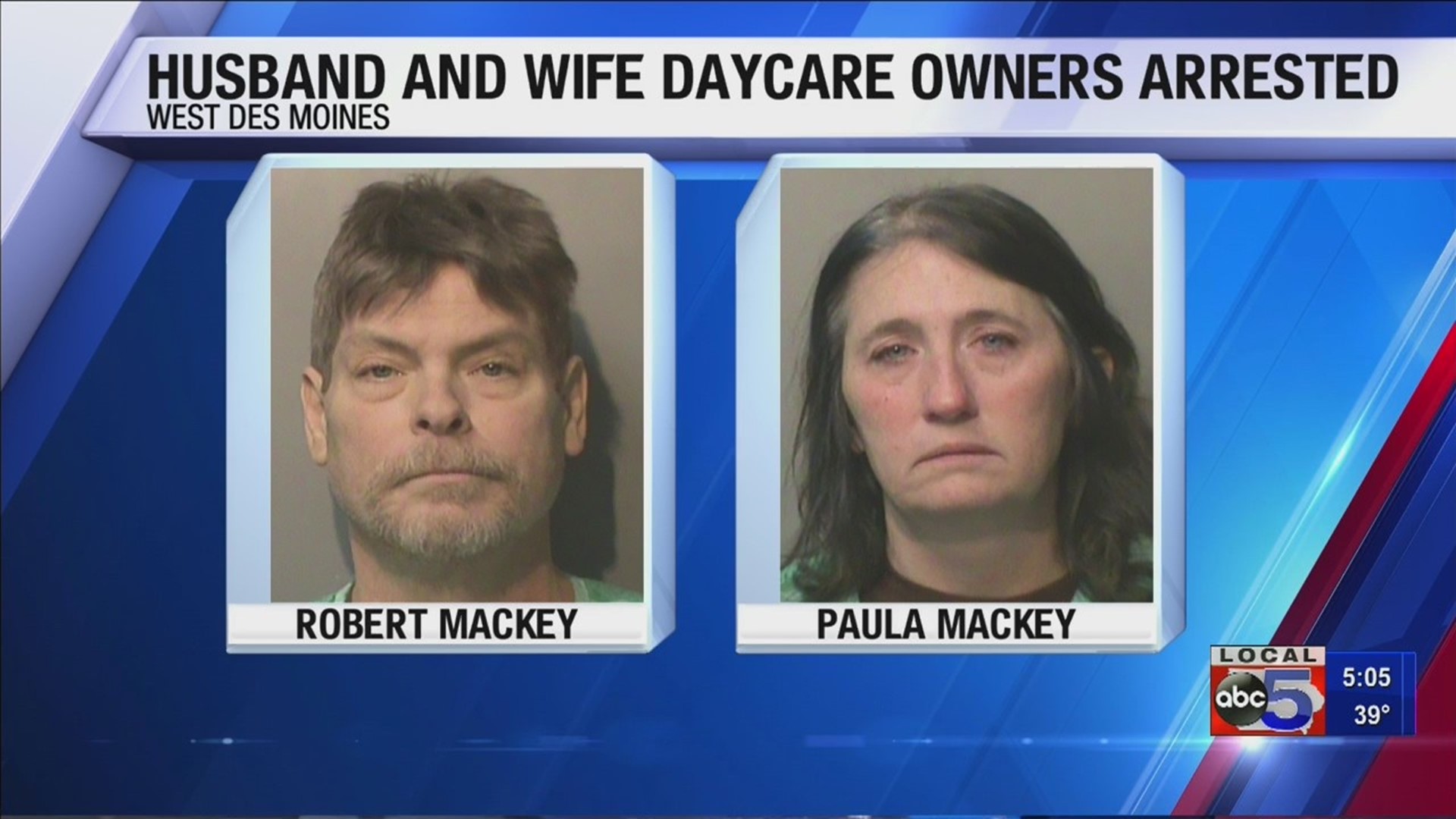 55-year-old Robert Mackey and 48-year-old Paula Mackey were booked into the Polk County Jail early Friday morning and charged with the following: Neglect or Abandonment of a Dependant Person (five counts), Possession of a Controlled Substance (one count), Operate a Child Development Home Without Authority (one count).

The Mackeys “did unlawfully possess a green leafy substance, marijuana, inside a baggie, which weighed approximately 3.4 grams” in their master bedroom, according to a criminal complaint.

The couple allegedly had 17 children, ranging from infants to seven years of age, being cared for at the home, according to an additional criminal complaint.

All of the charges are felonies except for the simple misdemeanor regarding their alleged illegal operations of an unregistered child development home.

Ammunition, tools to make ammunition, handguns and long guns were located “in an area where the day care children were present and had access”, court documents read.

The family room, master bedroom and basement were all listed as locations where drugs, drug paraphernalia and/or weapons were present and accessible to children.

According to a search warrant obtained by Local 5 earlier in October, an anonymous tip was given to Iowa DHS in May that Robert and Paula were “in another room nearby” or watching TV “instead of supervising” the kids.

On June 6, a DHS social worker made an unannounced visit to the home but “found no one to be available”.

On June 7, two social workers went to the home and spoke with both Robert and Paula Mackey.

Paula Mackey told the social workers they care for 18 or 19 kids, but Iowa law only allows unregistered day cares to care for up to five kids at a time.

According to a search warrant, Robert Mackey told the social workers he “had never heard of any law that required a provider with more than five children in care to be registered”.

DHS issued the Mackeys a notice to immediately shut down since they weren’t following the law.

But on the morning of June 12, a social worker saw 13 kids get dropped off, well above the five-child limit.

That’s when police got involved.

West Des Moines police executed a search warrant on June 12, with one detective noting “there were firearms within reach” of one child and “a strong odor consistent to that of marijuana” in the master bedroom.

A list of property seized—drugs, drug paraphernalia and weapons, along with various documents—are detailed in a June 13 West Des Moines Police Department evidence list submitted to the court.

“In the living room area there was a firearm in a desk drawer, and medications on top of the desk, also within reach of the children,” a search warrant read. “Many firearms have been seen in the residence that would be accessible to the children.”

During the search, police found 22 firearms, including handguns and an AR-15, 3.4 grams of marijuana and drug paraphernalia.

Both have been released from the Polk County Jail, according to online records.

Timeline of investigation in Robert and Paula Mackey

May 28, 2019: Iowa Department of Human Services got an anonymous tip about unsupervised kids at unregistered West Des Moines day care

June 6, 2019: DHS attempted to visit to the Mackey’s day care “and found no one to be available”.

June 7, 2019: DHS social workers made contact with the Mackeys and told them about the complaint they received.

The Mackeys told DHS three adults care for 18 or 19 kids at their day care.

DHS told the Mackeys it was illegal to care for more than five children if they aren’t registered with with the state. They gave them notice to either decrease to five or less children or cease operations.

Robert told the social worker he understood and “would address the concern.”

Later that day, police got a search warrant for the day care and found 17 kids in their care.

One child was found strapped into a swing “without any supervision and the door closed”. Another was found in a crib where firearms were within the child’s reach.

There were also medications on the desk in the living room within reach of the children and a firearm in the desk drawer.

According to the search warrant, many firearms have been seen in the residence that would be accessible to the children.

A complete list of property seized was listed in a West Des Moines Police Department evidence list submitted to the court.

November 1, 2019: Robert and Paula Mackey booked into the Polk County Jail on seven charges: six felonies and one serious misdemeanor. They are later released.