Simpson professor charged with murder in the death of her husband

An assistant professor from Simpson College is in jail, accused of murdering her husband. 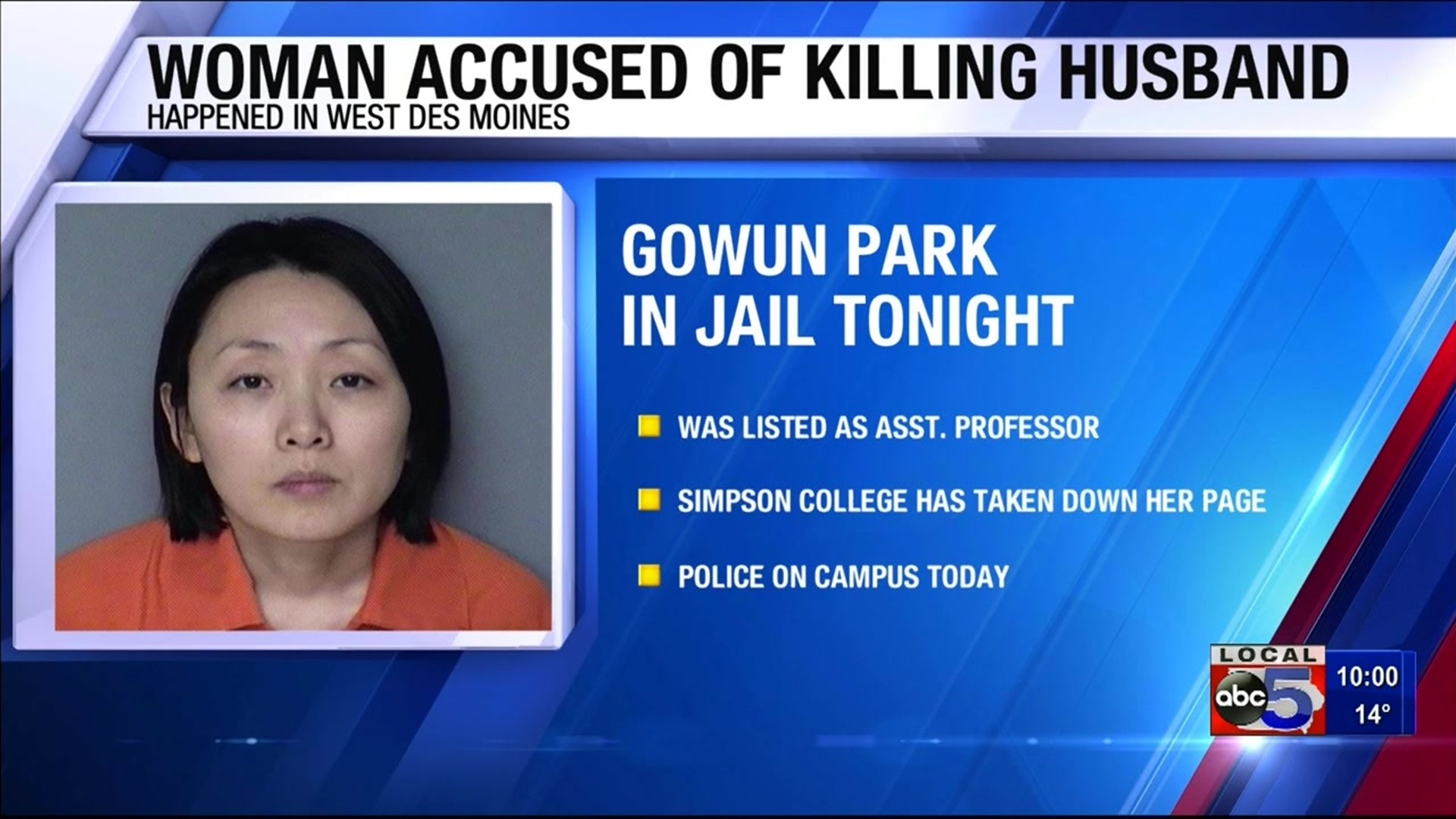 WEST DES MOINES — An assistant professor from Simpson College is in jail, accused of murdering her husband.

Gowun Park, 41, was listed on the college’s website as an assistant professor of economics. Wednesday afternoon, Simpson students confirmed with Local 5 that they received an email stating that Park was charged with murder.

West Des Moines police have informed Simpson College that Dr. Gowun Park, Assistant Professor of Economics, has been arrested and charged in the death of her husband. The investigation is ongoing, and police have informed us there is no threat or any link to the campus community. The college is monitoring the situation and will cooperate with authorities in their investigation.

Arrangements are being made to cover classes. Any member of the campus community with questions, please contact Christie Denniston Simpson College, Executive Director of Marketing and PR, at christie.denniston@simpson.edu or at 303-827-5164.

“I just had her last semester,” said one Simpson economics student, who wanted to remain anonymous. “I am just shocked—it is hard to formulate thoughts right now. She was so nice—so normal.”

First responders were called near 81st Street and EP True Parkway Saturday night around 6:46. When they arrived, they found Nam lying face down on the floor in the office of their home.

According to the criminal complaint, Park admitted to police that she bound Nam’s hands and feet by zip ties, and then bound him with a rope to a chair. Police accuse Park of putting a piece of clothing in her husband’s mouth to prevent him from yelling.

They say that Saturday afternoon, Park didn’t free Nam from the binds, even though he was in distress.

They say Nam was unable to free himself.

Nam was taken to a local hospital, where he was declared dead.

Bond for Park is currently set at $5,000,000. She has a preliminary hearing scheduled for Feb. 28 at the Dallas County Courthouse.

They say the investigation is ongoing and there is no danger to the community.

After hearing the news, students at the school are in shock.

Gunnar Davis can hardly believe the headline in his college newspaper, even though he wrote it.

“Really trying to process it with everybody else,” Davis said.

As editor-in-chief of the Simpsonian, he was tasked with informing students that one of their professors was charged with kidnapping and murdering her husband.

Something he is still grappling with.