Bob and Patty Cordero share impressive memorabilia collection that dates back to 1969. 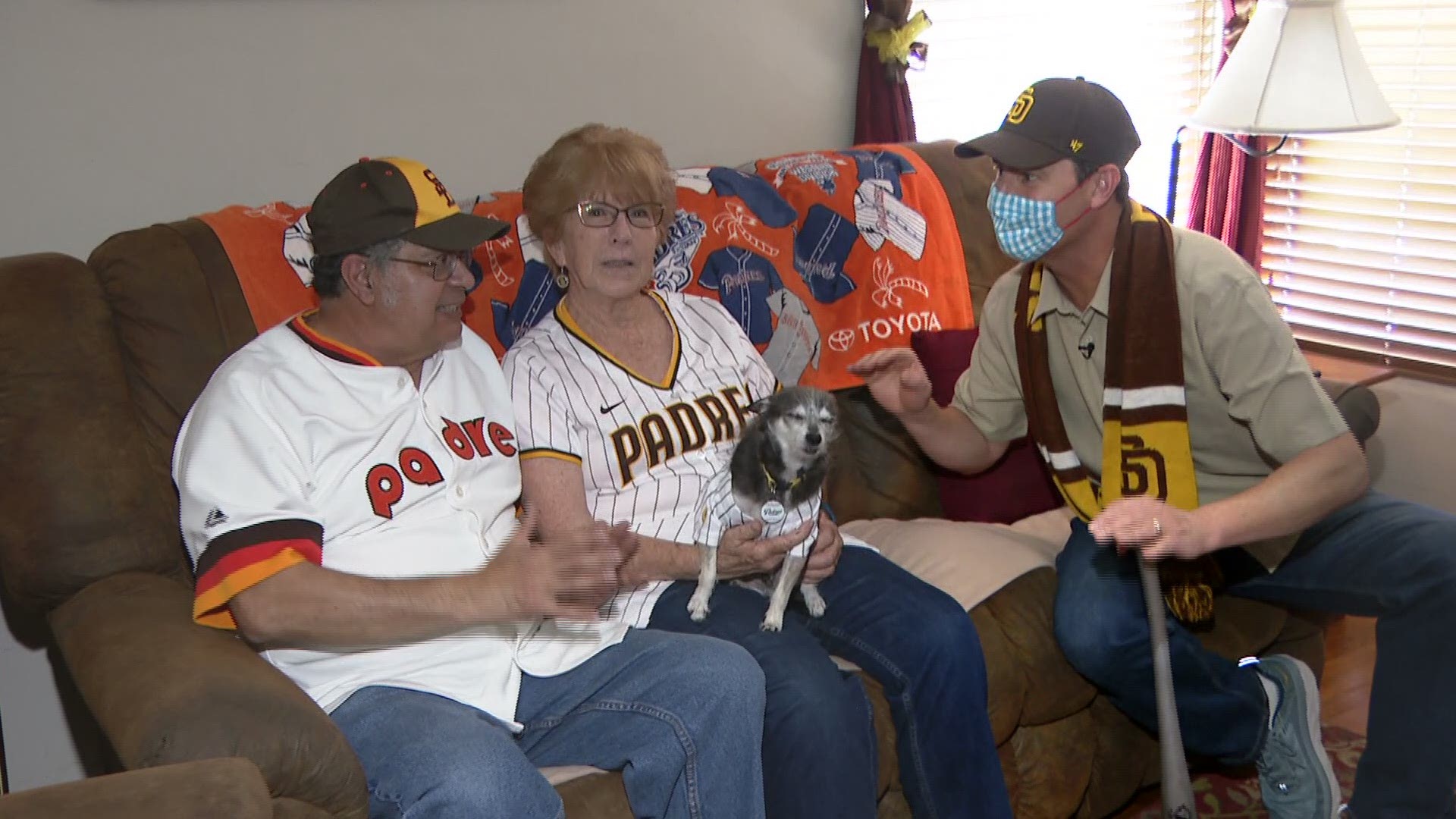 LAKESIDE, Calif. — The San Diego Padres opened their season and Petco Park today to baseball fans. In this Zevely Zone, I went to Lakeside to meet a husband and wife who have been eagerly waiting to hear the words "Play Ball". I figured why not take a swing at finding the two biggest Padre Fans? Let's just say there's a reason Bob and Patty Cordero didn't paint their home blue. "We do not like the Dodgers, because we do not like LA. It's in our DNA," said Bob who was standing in front of his yellow home. The couple is going to paint their trim brown in order to officially have a Padre colored house. As you enter their home you are met by a life-sized poster of Eric Hosmer and a case of baseball pins. "This is my pin collection that I started back in 1984," said Bob.

Patty and Bob have been Padre fans since 1969. "He has his little Padre shirt on," said Patty pointing to their chihuahua Barney who was dressed for game day. Bob was wearing a jersey from the 1980's he found on a Cooperstown clearance rack. "1984 jersey, home marked down half price it was meant to be," said Bob. Much like they feel a magical Padres season is meant to be. "Let's go Padres," we chanted from the couch where Bob and Patty watch every game if they don't watch the Padres in person from Petco Park. Bob showed me a brick from Petco Park they were given for being super fans. Every time they go to Petco Park, they bring a something home. In their house I see Tony Gwynn on a Wheaties box and a Randy Jones' signed cap, not to mention an impressive Bobble Head collection.

Bob and Patty were just getting me warmed up. "This is our big collection over here," said Patty. Her dad was a security guard for the Padres which meant extra access and an incredible baseball collection. "That's Tony Gwynn's signature. That's Ed Spiezio and he hit the first home run as a Padre," said Patty.

Bob says he knew it was true love when Patty returned from, Peoria one year with one ball sign by Tony Gwynn and Garth Brooks. "Ha, ha, score!" yelled Bob. Just about everything in their home from old cups to caps has an autograph on it. "That's a signed Tony hat, that's a signed Jerry Coleman hat," said Bob. His baseball card collection is a Padres history book. "Goose Gossage, Craig Lefferts, Trevor Hoffman. Bret Boone," I said while thumbing through the book.

I met Bob and Patty last year when we profiled the San Diego Madres. So, you say you're a San Diego Padre fan, but are you ready to take your passion to the next level? The team's fan club that started in 1972 by a group of baseball wives. "Our whole purpose is the children, that is the only reason that we exist to raise funds for both challenged and girls' softball and Little League in San Diego County," said Kandi Nieto, the club's president.

RELATED: Swing for the fences with the 'San Diego Madres'

Patty promised me a tour of her memorabilia. Believe me, it's a tour that takes you into extra innings. "Are you serious? Ha, ha," I laughed while being guided into yet another room. "Jake Peavy, I got that autograph too," said Patty. In their back yard we played Padre cornhole and then it was back on the couch for a chant that never grows old, "Beat LA, Beat LA! and the Diamondbacks," we cheered.

The San Diego Madres are looking for new member and support. If you'd like to join the group or make a donation click here.