Before they put the brilliant jewelry on their fingers, the Lakers promised to hold a real party for their 17th championship as soon as everyone can. 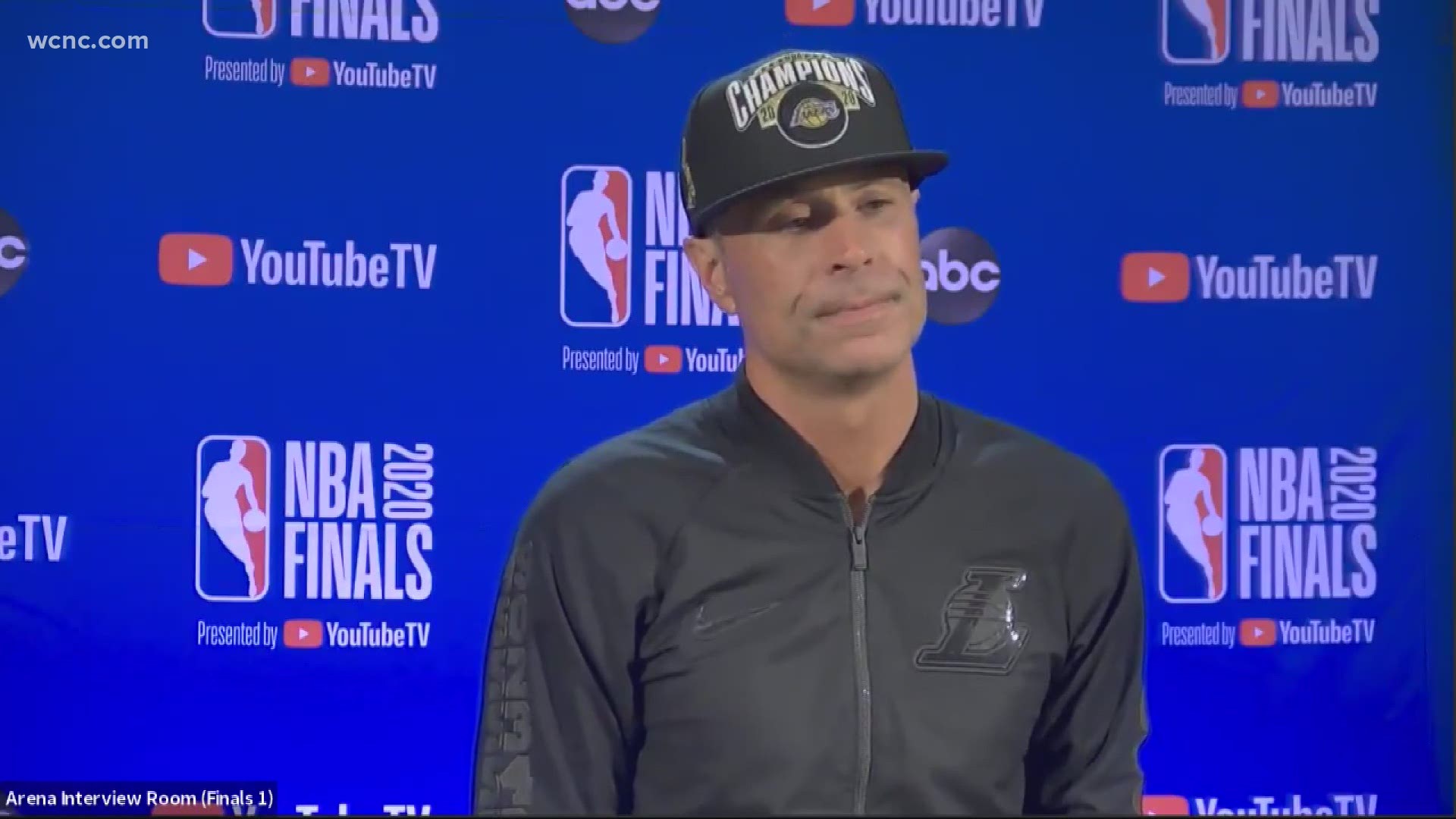 LOS ANGELES — Editor's Note: The video above is from October 2020.

The Los Angeles Lakers received their NBA championship rings Tuesday night in an empty arena that still felt filled with warmth from their families, friends and millions of fans worldwide.

And while they put the blindingly brilliant jewelry on their fingers, the Lakers promised to hold a real party for their 17th championship as soon as everyone can attend.

“I’m going to take a second to speak directly to Lakers fans: We miss you so much,” Lakers owner Jeanie Buss said. “The team misses you, but someday soon, we’ll be together. And when we are together, we have something special to celebrate.”

RELATED: Sports figures we lost in 2020

This is what it's all about 💍 pic.twitter.com/kZlYMYb93X

Just 72 days after LeBron James, Anthony Davis and their teammates finished off the Miami Heat in the NBA bubble, the Lakers returned from the shortest offseason in league history to get their reward. The coaches, executives and 11 returning players from last season’s championship team received their rings at Staples Center in a brief, warm ceremony before their regular season opener against the Los Angeles Clippers.

The raising of the banner honoring their 17th championship is going to wait until fans are in Staples Center to enjoy it with them. The spot where it will hang eventually on the arena walls is currently occupied by a black banner reading: “STAY TUNED, LAKERS FAMILY.”

The ring presentations observed social distancing measures that seemed totally appropriate for 2020. The families of the Lakers' players and coaches appeared in short, heartfelt videos of introduction before the players walked up to an individual podium to grab the rings by themselves.

Davis was cheered on by his parents, who expressed their pride in all of his basketball accomplishments. James' mother, uncles and children virtually congratulated him before he claimed his ring and joyously held up four fingers in honor of his four NBA titles with three franchises.

When general manager Rob Pelinka put his ring on his right hand, he threw up a 2 and 4 with his fingers in honor of Kobe Bryant.

“You showed last year what a talented group of individuals can accomplish if they buy into being a team,” Lakers coach Frank Vogel told his players. “To our fans, we cannot wait until it is safe enough for you guys to be back at Staples Center so we can perform in front of you and celebrate all this stuff with you guys. We thank you and we love you.”

Jason of Beverly Hills, the Lakers’ traditional jeweler, created the rings, just as he did for the 2009 and 2010 championship teams led by Bryant, Pau Gasol and coach Phil Jackson.

James and Davis led the Lakers to the title in the NBA’s Florida bubble during the first season of their West Coast partnership, making a 16-5 postseason run to James’ fourth championship and Davis’ first.

But the Lakers made no secret of their disappointment at celebrating their entire offseason without fans, thanks to the coronavirus pandemic. They didn’t get a parade in downtown Los Angeles, and no fans were in the Staples stands to cheer in recognition of the franchise’s sixth championship since the downtown building opened in 1999.

“These are obviously highly unusual times and a very different ring ceremony without fans,” NBA Commissioner Adam Silver said. “To the Laker fans, we’re going to make it up to you. We’ll do this again when the fans are in the building.”

And at least one member of the Miami Heat — Bradley, who passed on joining the Lakers in the bubble last summer citing family health concerns and then signed with the Lakers’ NBA Finals opponent in the offseason — was eager to see the Lakers’ ring celebration.

Bradley said he would be watching the ceremony on television. The Heat were in Orlando on Tuesday night, preparing for their opener their Wednesday against the Magic.

“I was actually texting Kyle Kuzma this morning,” Bradley said Tuesday. “He’s pretty excited about the ceremony. I’m excited for those guys. ... There was a lot of work I put in last year with that team and it’ll be a memory that I have forever.”

Bradley has been sized for a ring, though wasn’t clear Tuesday exactly when he would receive the jewelry. The Heat visit the Lakers on Feb. 20, which might be the logical time for Bradley to get the ring.