Oklahoma State, Purdue and Colorado joined the poll while Southern California, Tennessee and Missouri dropped out. 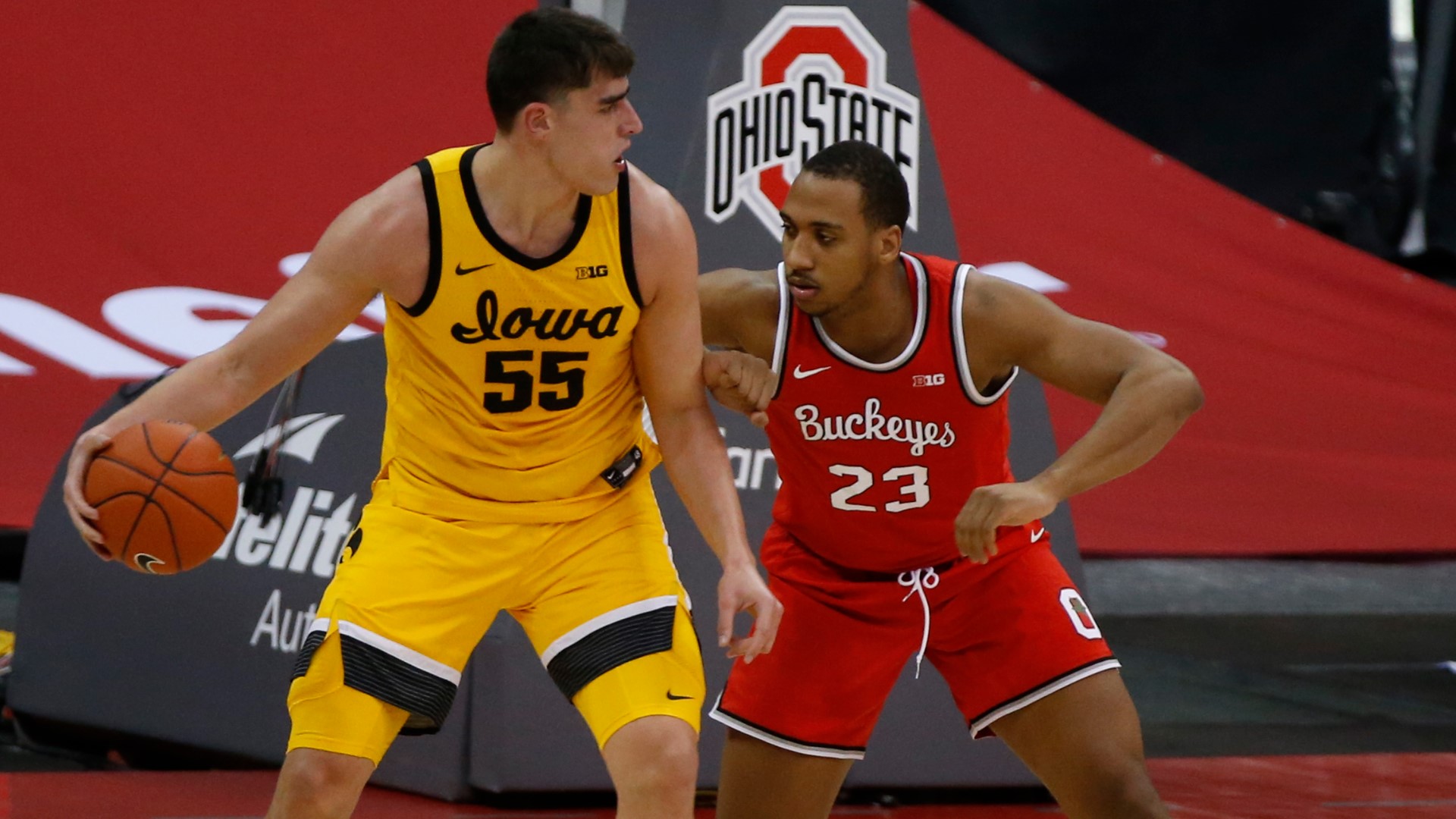 WASHINGTON — Michigan finally broke the stranglehold of Gonzaga and Baylor atop The Associated Press men's college basketball poll on Monday, taking advantage of the Bears' loss at Kansas to leap into the No. 2 spot behind the Bulldogs.

Gonzaga continued to hold down the top spot in the Top 25, just as it has all season, receiving 59 of 63 first-place votes among national media members. But the Wolverines picked up the other four to climb into second while the Bears, whose unbeaten season was foiled by the Jayhawks on Saturday night, dropped back to third place.

Illinois climbed one spot to fourth and Iowa gave the Big Ten three teams in the top five.

“We look at it like there's room for improvement,” said Wolverines coach Juwan Howard, whose team pushed its winning streak to seven with an easy win over Indiana on Saturday. "Our guys have that kind of growth mindset, 'What can we do better?' I don’t think there’s ever such a thing as playing a perfect game, (but) one possession at a time, competing for 40 minutes, from start to finish, that’s been our mindset going into ballgames.”

Now the question is whether the Wolverines can hold onto its No. 2 spot. They have a showdown with the Illini on Tuesday night before wrapping up the regular season with a home-and-home series against Michigan State.

“No question, they deserve all of the whatever the word you want to use — accolades, praise. They deserve it all,” Hoosiers coach Archie Miller said. “They have a great spirit about them. That’s one thing you’d probably have to look at Michigan and just look at the way that they vibe and they play, both ends of the floor. They get after you, they play hard for one another, they have a great bounce to them, so you can tell they’re very together. That’s a big part of what they’re doing.”

POLL ALERT: Undefeated Gonzaga still No. 1 but Michigan takes over at No. 2 after Baylor's loss; Iowa jumps to No. 5.

West Virginia continued its steady climb, up four spots to No. 6 after its third consecutive win. Ohio State fell three spots to seventh after its loss to the Hawkeyes. Alabama, Houston and Villanova rounded out the top 10.

Florida State was next while Arkansas leaped eight spots to No. 12 after running its winning streak to six, including victories over then-No. 10 Missouri and the Crimson Tide. It's the highest the Razorbacks have been ranked since Feb. 16, 1998.

Also making a big move was No. 13 Kansas, fresh off its win over the Bears; the Jayhawks have won six of seven after their record 12-year streak in the Top 25 came to an end, with the loss coming to then-No. 14 Texas in overtime.

Creighton dropped one spot to No. 14, followed by the Longhorns. Oklahoma and Oklahoma State were next, followed by Big 12 rival Texas Tech, with San Diego Staten and Loyola Chicago rounding out the top 20.

Virginia was No. 21, followed by Virginia Tech, Purdue, Colorado and Wisconsin. The newcomer Boilermakers and sliding Badgers give the Big Ten six teams in the Top 25, one fewer than the poll-leading Big 12.

MORE ON THE BEARS

Baylor has struggled since coming off a three-week pause for COVID-19 issues, needing a frantic rally to beat bottom-dwelling Iowa State before falling in Allen Fieldhouse. Bears coach Scott Drew was quick to congratulate the Jayhawks on the win, but he also made it clear that his team is still trying to find its legs after a long break.

“Anyone that's had COVID would know, when you come back, you're not 100%,” Drew said. “The people that didn't and weren't able to practice or work out, I would say that's rust. And then the last thing I would say, it's a chemistry game.”

Oklahoma State went from the first team out all the way to No. 17 on the strength of Top 25 wins over the Red Raiders and Sooners last week. Purdue entered at No. 23 after blowing out Penn State for its third consecutive win, and Colorado went from barely on the radar to No. 24 after back-to-back wins over then-No. 19 Southern California and UCLA.

BYU was the first team out of the poll after the Cougars' fourth straight win solidified their place behind Gonzaga in the West Coast Conference. Florida appeared on seven ballots after not appearing on any last week, and St. Bonaventure found its way onto eight ballots after the Bonnies edged Davidson in back-to-back games and routed George Washington.

RELATED: Kansas' record Top 25 run over; Michigan jumps to No. 3