Over 8,000 Bosnian Muslims perished in 10 days of slaughter after the town was overrun by Bosnian Serb forces in the closing months of the country's 1992-95 war. 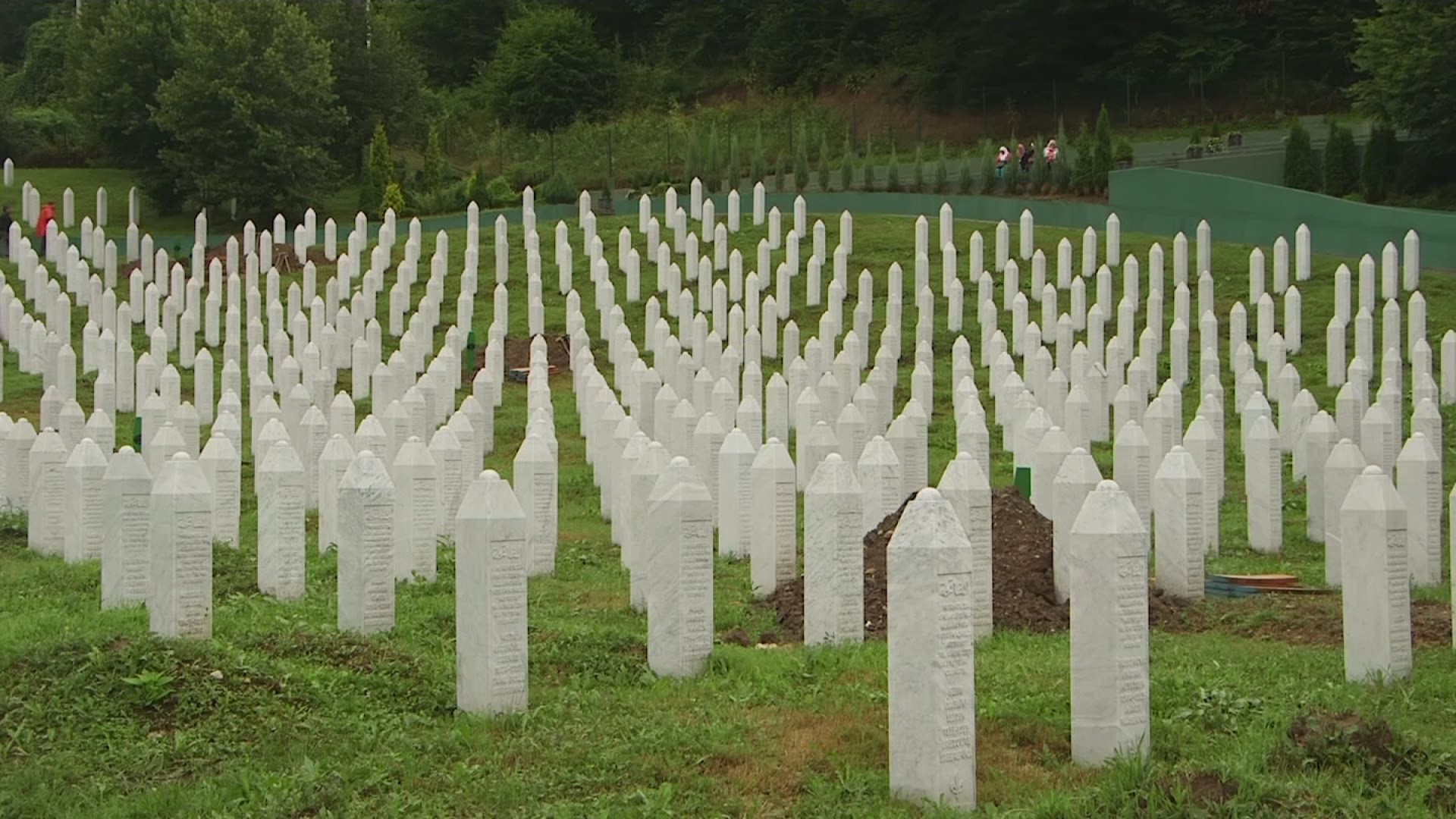 SREBRENICA, Bosnia and Herzegovina — Editor's note: The video above is from July 2019.

A quarter of a century after they were killed in Europe’s worst massacre since World War II, eight Bosnian men and boys will be laid to rest Saturday in a cemetery just outside of Srebrenica — their marble gravestones joining thousands more, each with the same month and year of death.

Over 8,000 Bosnian Muslims perished in 10 days of slaughter after the town was overrun by Bosnian Serb forces in the closing months of the country's 1992-95 fratricidal war. Their executioners tried to ensure they would never get the sort of memorial Srebrenica holds every year. Their bodies were plowed into hastily made mass graves and then later dug up with bulldozers and scattered among other burial sites to hide the evidence of the crime.

But, since 1996, Bosnian and international scientists have slowly unlocked what was once described as the “biggest forensic puzzle anywhere in the world,” unearthing the bones from those gruesome death pits and connecting them with the names of the people they belonged to.

When the remains are identified, they are returned to their relatives and reburied in the Potocari memorial cemetery. And each year on July 11, the anniversary of the day the killing began in 1995, relatives gather for a funeral of the recently identified. Most of the dead were men and boys, so most of the mourners are women — mothers and sisters, daughters and wives.

Credit: AP
Gravestones are lined up at the memorial cemetery in Potocari, near Srebrenica, Bosnia, Tuesday, July 7, 2020.

Massacre survivor Fazila Efendic will attend the collective funeral this year to witness her sisters in grief bury a handful of bones, as she once did.

Having a grave to visit will bring them some relief, Efendic says. Her husband, Hamed, and her only son, Fejzo, were killed in the massacre.

For years, every time a new mass grave was found, she rushed to the site hoping to see something she would recognize as having belonged to her loved ones.

“There are no words to describe the sorrow you feel when you are looking for (your loved ones) bone by bone,” Efendic said. “I visited every newfound mass grave; I’ve seen the inside of every one of them.”

All of Hamed’s remains were found in two mass graves, one unearthed in 1998 and the other in 2000. Fejzo — or rather two of his leg bones — was found in another one several years later. Efendic buried her husband at Potocari after his remains were found but waited years before finally deciding to do the same with Fejzo’s partial remains.

“I wanted him to be next to his father and to be able to come and pray over their graves,” she said.

Typically, thousands of visitors from various countries attend the July 11 service, but this year — because of the coronavirus pandemic — only a relatively small number of survivors will be allowed at the cemetery.

Instead, many speakers will attend “virtually,” explained Emir Suljagic, the director of the Srebrenica Memorial Center at Potocari.

That the massacre survivors are able to visit their dead at all is a testament to the forensic scientists at the International Commission on Missing Persons.

Set up in 1996 at the urging of then-U.S. President Bill Clinton, the commission designed a DNA-based system to find and identify the remains of some 40,000 people — the vast majority of them from Bosnia — who had been reported as missing as a result of the 1990s conflicts in the former Yugoslavia.

In 2014, the commission became a permanent global body, expanded its mission to other conflicts and natural disasters, and moved its headquarters to The Hague. But not before helping to identify more than 70% of all the missing victims of the 1990s Balkan wars, including close to 7,000 of those killed in Srebrenica.

Damir Marjanovic, an early member of the then Bosnia-based commission, said the team’s work has greatly increased scientists' ability to pull DNA profiles from skeletal remains.

“For us, finding and identifying the missing was a mission,” said Marjanovic, who today is a professor of genetics and anthropology at the International Burch University in Sarajevo.

The Srebrenica massacre is the only episode of the Bosnian war to be defined as a genocide, including by two U.N. courts, in part thanks to the commission’s findings, including DNA records, that have been admitted as evidence at trials.

While many Bosnian Serbs continue to deny the extent of the crime, the still-expanding sea of white marble at Potocari makes the truth plain.

“This is Srebrenica,” said Efendic, looking out at the gravestones.