Saturday's event was held to support an opponent of one of the representatives who voted to impeach the former president. 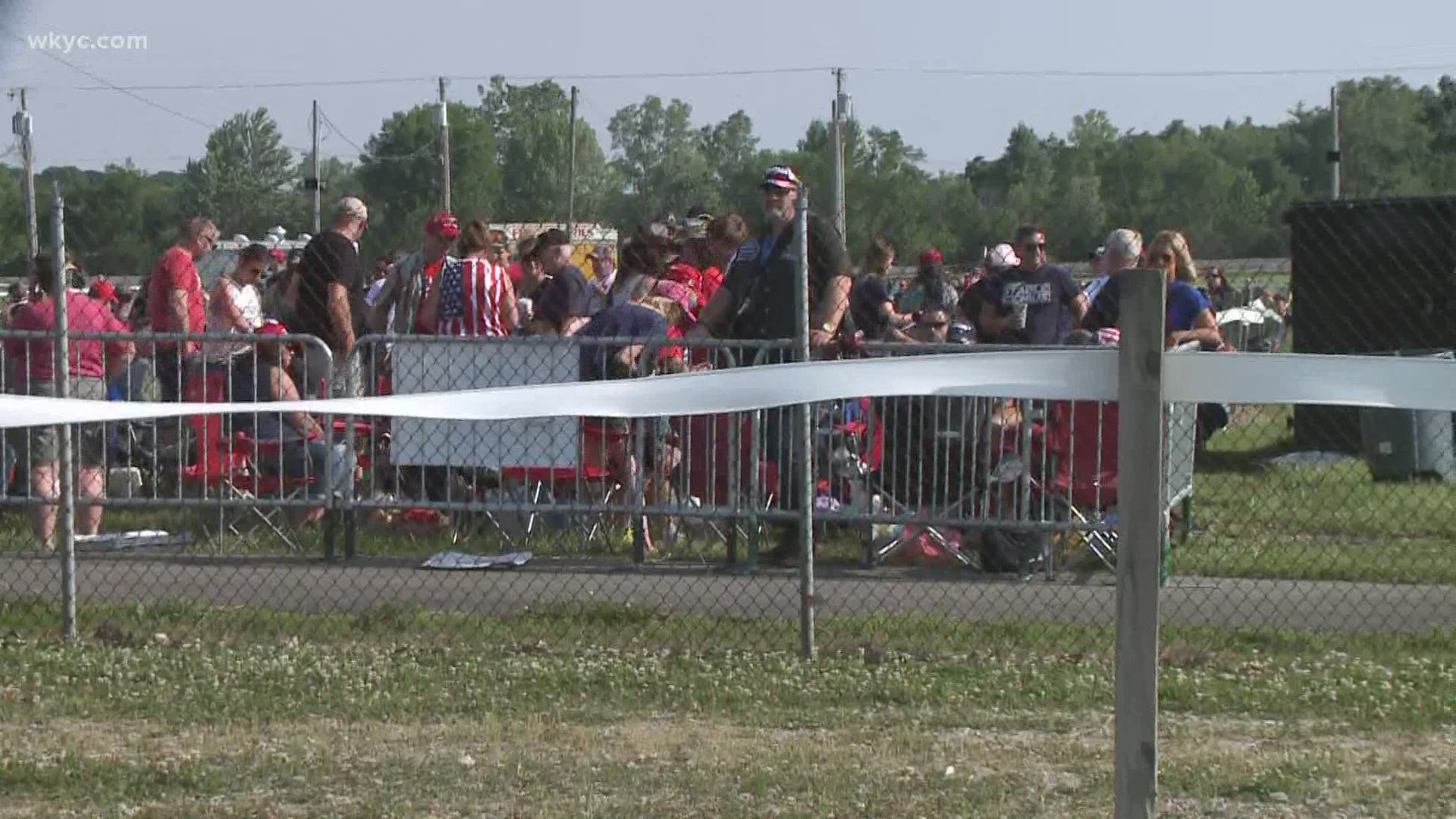 WELLINGTON, Ohio — Donald Trump on Saturday reprised his baseless election grievances and painted a dystopian picture of the country under Democratic control in his first campaign-style rally since leaving the White House.

His mission, in part, was to exact revenge on one of the Republicans who voted for his historic second impeachment.

Trump's event Saturday night at Ohio's Lorain County Fairgrounds, not far from Cleveland, was held to support Max Miller, a former White House aide who is challenging Republican Rep. Anthony Gonzalez for his congressional seat. Gonzalez was one of 10 GOP House members who voted to impeach Trump for his role in inciting the deadly Jan. 6 insurrection at the Capitol building.

Trump wants them to pay.

In his remarks, Trump revisited some of the false claims familiar from his fruitless challenges of President Joe Biden's election victory. “On the evening of Nov. 3 the election was over and then all of a sudden things started closing down all over,” he said of election night. “We took a massive victory, they did, into something that should never be allowed.”

In fact, Trump was describing a legitimate vote counting process that saw Biden take the lead as the night wore on, as Democratic-leaning cities in key states and results from mail-in ballots were reported. Trump administration election officials and top election officials in Republican-led states affirmed the validity of the election outcome.

In another echo of the past, the crowd chanted “Lock her up” at the mention of Hillary Clinton, the Democrat he defeated in 2016.

Traffic was backed up from the fairgrounds into town, where pro-Trump signs dotted residents' lawns. On street corners, vendors sold “Trump 2024” flags and other merchandise as supporters arrived.

The rally, held five months after Trump left office under a cloud of violence, marks the beginning of a new, more public phase of his post-presidency. After spending much of his time behind closed doors building a political operation and fuming about the last election, Trump is planning a flurry of public appearances in the coming weeks. He'll hold another rally in Florida over the July Fourth weekend unattached to a midterm candidate and will travel to the southern border in the coming week to protest President Joe Biden's immigration policies.

The rally also came as Trump faces immediate legal jeopardy. Manhattan prosecutors informed his company Thursday that it could soon face criminal charges stemming from a wide-ranging investigation into the former president’s business dealings. The New York Times, citing sources familiar with the matter, reported that charges could be filed against the Trump Organization within days. Trump has denounced the investigations as nothing more than a “witch hunt” aimed at damaging him politically.

Although Trump remains a deeply polarizing figure, he is extremely popular with the Republican base, and candidates have flocked to his homes in Florida and New Jersey seeking his endorsement as he has tried to position himself as his party’s kingmaker.

Trump has said he is committed to helping Republicans regain control of Congress in next year’s midterm elections. But his efforts to support — and recruit — candidates to challenge incumbent Republicans who have crossed him put him at odds with other Republican leaders who have been trying to unify the party after a brutal year in which they lost control of the White House and failed to gain control of either chamber of Congress.

So far, nine of the 10 House Republicans who voted for Trump's impeachment have drawn primary challengers. And Trump has offered to support anyone who steps forward to challenge the remaining candidate, Rep. John Katko of New York, syracuse.com reported.

“Fake Republicans, anybody that voted for the impeachment doesn’t get it," he said. "But there weren’t too many of them. And I think most of them are being, if not all, are being primaried right now, so that’s good. I’ll be helping their opponent.”

Gonzalez, a former college and professional football player, has stood by his impeachment vote in the face of fierce criticism from his party’s conservative wing, including his censure by the Ohio Republican Party.

At the same time, Trump continues to obsess over his ongoing efforts to overturn the results of the 2020 election, which he insists he won, even though top election officials, his own attorney general and numerous judges have said there is no evidence of the mass voter fraud he alleges.

And he has publicly entertained the idea that he could somehow be reinstated into office, even though no legal or constitutional basis for doing so exists.

At the same time, he continues to tease the possibility that he will mount a comeback run for the White House in 2024. Aides say Trump, who was banned from Twitter and Facebook after Jan. 6, will make a decision after the midterms next fall.

Trump’s rallies have been instrumental to his politics since he launched his 2016 campaign. The former reality star is energized by performing in front of his audiences and often test-drives new material and talking points to see how they resonate with the crowd. His political operation also uses the events to collect critical voter contact information from attendees and as fundraising tools.

And they have spawned a group of hardcore fans who traveled the country, attending dozens of rallies, often camping out overnight to snag prime spots. Some of those supporters began lining up outside the venue early in the week as they reunited for the event.

Others were attending their first rallies, having felt compelled to turn out in the election’s aftermath.

“We miss him,” said Chris Laskowski, 55, who lives in Medina, Ohio, and was attending her first rally with her husband, James. “I think they robbed him of the election and he’s still our president,” she said.

“He’ll be back in August,” predicted Peggy Johnson, 60, who had traveled from Michigan to attend what she said was her seventh Trump rally. “He actually is president now.”