What triggers an election recount in Iowa?

Iowa's 2nd Congressional District race is too close to call Wednesday evening. What happens if one of the candidates requests a recount? 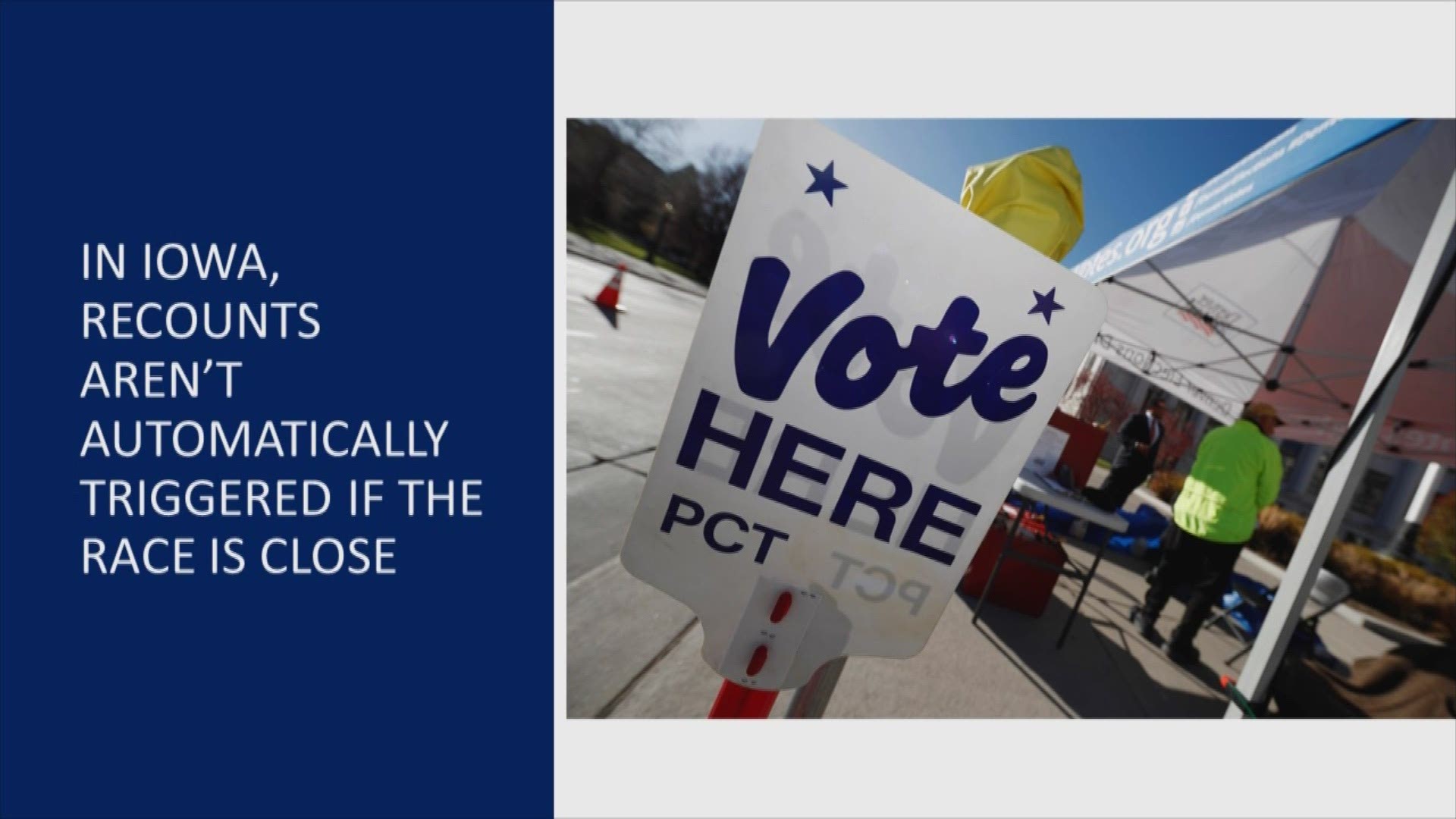 The race for Iowa's 2nd Congressional District has yet to be called Wednesday night, even with 100% of precincts reporting.

The Associated Press called the races in Iowa's other three districts Tuesday night into Wednesday afternoon.

The 2nd District race is too close to call, however, Republican Mariannette Miller-Meeks is leading Democrat Rita Hart by a slim 282 votes—or 0.1%, with all precincts reporting.

With this close of a race, it is likely that one or both of the campaigns will request a recount. If that happens, it could be the largest recount in Iowa history.

Here's what you should know about the recount process.

How does the process work?

A recount is exactly as it sounds— it's when ballots that were voted and counted at an election are counted again.

During the process, voter names are kept secret to maintain confidentiality.

This is different from an election contest, which is a process for challenging the results of an election by proving that improper activities resulted in a wrong outcome.

"The recount is based on what the candidates want to do," said Iowa Secretary of State Paul Pate.

"They'll probably wait until we finish the canvass this week to allow for any absentee ballots that might come in in the mail that were postmarked legally, they'll look at those things. And then they'll have to decide as candidates which counties in the district they'd like to have a recount in and they'll have to petition for that."

Pate estimated that candidates will wait until at least next week to request a recount.

How could this impact results?

"The important thing to remember at this point is the results are unofficial," said Grant Woodard, a Des Moines attorney. "They will be until early next week when every county in the state, and in this congressional district in particular, are going to have to do an official canvass or certification of their votes."

Woodard said the numbers can still change over the next few days, mostly due to absentee ballots rolling in.

"The other thing that can change as well is what we call provisional ballots," Woodard said.

Provisional ballots are cast when a voter is unable to validate their identity at the polls. Once filled out, their ballot is placed in a separate bin from the others until the voter can confirm their qualifications with election officials in their county.

How much does a recount cost?

If a recount is announced for the 2nd District race, Iowa taxpayers will be footing the bill. Under Iowa law, candidates don't have to pay for a recount if the race has a margin of less than 1%.

The Secretary of State's Office doesn't have an estimate on how much the recount would cost until the candidates request what counties they'd like to be recounted.

However, they did say the cost will be minimal.

The process is open to the public, and representatives from both campaigns can observe the process.

"Those two campaigns in each of these counties should have have to appoint sort of a third person to be sort of a neutral party," according to Woodard.

"If they can't do that, then the Chief Justice of the judicial district that that county resides and picks that third person, mean, there's going to be a lot of activity over the next coming days."