Who is Felicia Moore, the challenger in the Atlanta mayor's race?

She announced her run officially on Thursday. 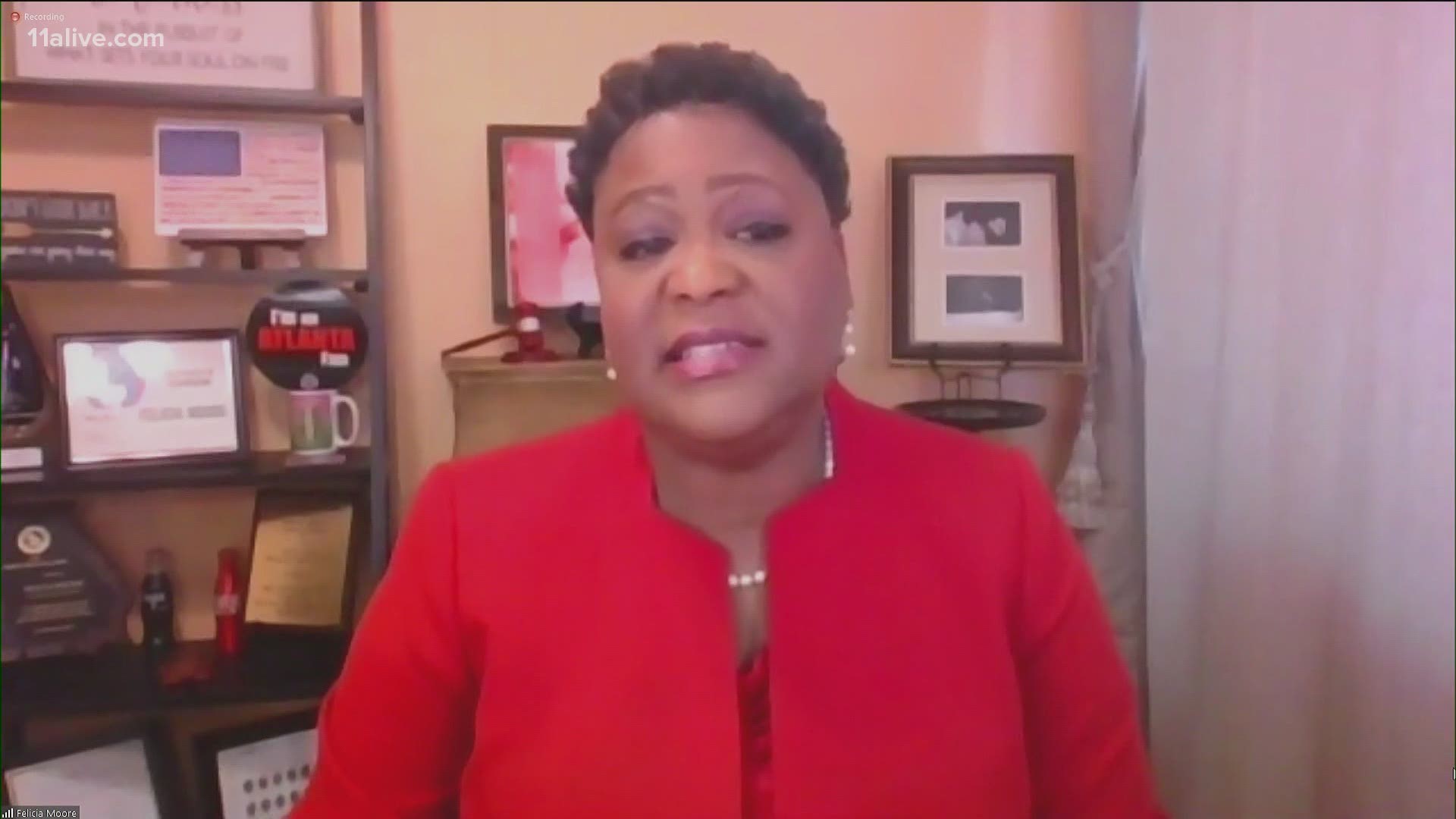 She was even floated as a potential vice presidential nominee or potential cabinet pick for President Joe Biden, and was recently offered the job of vice chair of the Democratic National Committee.

But is she more vulnerable at home politically than her national profile would suggest?

That's the question Atlanta City Council President Felicia Moore is going to set out to test. She officially announced on Thursday her plans to run against Bottoms in this year's mayoral election.

Moore, who would have been second in line if Bottoms had left Atlanta for a federal position, served on the city council for two decades representing District 9, which covers a large swath of westside and riverside Atlanta, before she was elected its president in 2018.

Her city council bio describes Moore as "known for her fierce stance on transparency "not afraid to speak her mind even if she draws the ire of those in power."

"She is a servant leader who is as comfortable in the presence of great political figures and celebrities as she is with everyday residents who are always eager to stop to greet her while out in the community," the bio states. "That tenacious spirit has garnered her praise and respect throughout the City of Atlanta and the State of Georgia."

Crime is expected to become a wedge issue Moore may exploit. Amid the protests and flagging police morale last year, Atlanta saw a violent crime surge that continues to be a hot-button issue.

She issued a series of recommendations on crime reduction strategies in a December memo, and sat down with 11Alive's Jeff Hullinger in July for an interview in which she staked out a somewhat sympathetic position for the Atlanta Police Department.

Moore discussed finding a middle ground amid calls for significant police reform, but also spoke of low morale in the department that she said was exacerbated by actions taken by the city and former long-time district attorney Paul Howard.

In her official announcement, she touched on her crime platform, saying "this race is against the crime that is out of control in every neighborhood in our city."

"I'm running to make every neighborhood safer. Every Atlanta resident should feel safe in their homes and communities, in their interactions with law enforcement and our police must be supported and empowered to do their jobs," she said. "We must transform the culture of policing in Atlanta and address the social issues which truly are at the root of crime."

She also said she was running for "transparency, ethics and accountability" and against "inequality of all kinds - racial, economic, educational and otherwise."

Moore touched on fiscal policy, saying she would bring "stability" and transparency to the city's finances.

Her city bio says she is credited with a 2011 reform effort which "rallied labor unions, pension boards and employee groups together to agree on increasing their contributions to both save their deﬁned beneﬁts and avoid expensive legal action against the city."

She has also recently drawn some opposition from T.I., the rapper and philanthropist who has a deeply influential presence in Atlanta.

T.I. seized on a 2017 story in an Instagram post this week, in which Moore had supported a new restriction on how close recording studios could be to residential homes (the proposed ordinance was defeated in the city council.)

"Our Culture Runs This Town Ma'am‼️" the artist wrote in a lengthy post. "These studios (& the creatives that work in em) have laid foundation & paved ways to create opportunities for this city like nothing else could. Yeah we might get loud, no we not perfect, but we've contributed to this city's culture & economic growth, consistently...for decades!!! Our contributions to the communities here in this city have gone overlooked far too long."

Moore graduated from Central State University in Ohio and earned a Master of Science degree from Central Michigan University with a concentration in Public Administration. She is also a member of the Alpha Kappa Alpha (AKA) Sorority that Vice President Kamala Harris belongs to.

On her campaign site, she describes first falling in love with the city on a 1979 high school class trip:

"My high school senior class took a trip to Atlanta in 1979, and it was love at first sight. Being from Indiana, Atlanta was considered the Black Mecca. While in Atlanta, a few of us snuck away for a night on the town and we went to Cisco’s on Campbellton Road. I thought I was in Black Hollywood!" Moore writes. "The men were so handsome, and the women so glamorous. And, for a young girl from Indiana, I was in awe to see so many professional blacks in one place. I told myself then and there if I ever moved away from home, it would be to Atlanta. Within a few years I was here!"