What does it mean to be a poll watcher?

President Trump urged his supporters to go and watch the polls during Tuesday's presidential debate, but that's not how poll watching works. 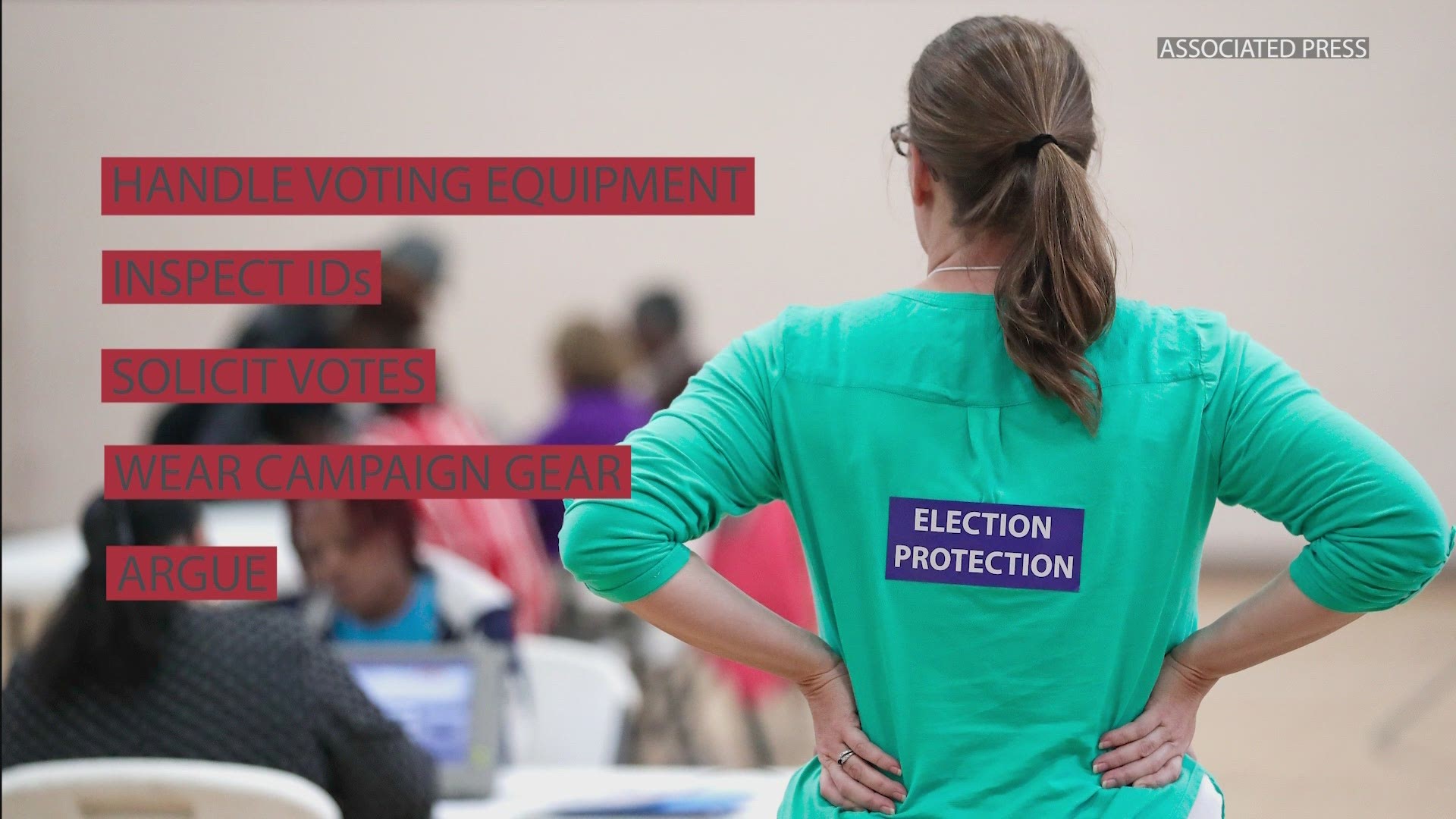 DES MOINES, Iowa — Election Day is getting closer and closer — we all know that after watching the first presidential debate Tuesday night.

During the debate, President Donald Trump brought up the need for poll watchers on Nov. 3.

"I'm urging my supporters to go into the polls and watch very carefully because that is what has to happen," President Trump said.

The president's statement is misleading, because you can't just walk into a polling site on Election Day and claim to be a poll watcher.

"Reminder: In Iowa, a person commits a felony if he/she 'intimidates, threatens, or coerces" a person to do or to refrain from voting," Iowa Attorney General tweeted Wednesday morning. "It is also illegal to interfere with the validity of an election or to loiter or electioneer at a polling place."

Local 5 is breaking down what a poll watcher is and what their responsibilities are at the polls this November.

Who are poll watchers?

A poll watcher is "a person who has official permission to be at a polling place on Election Day or in the room where absentee ballots are counted before the polls," according to the Iowa Poll Watchers Guide.

Poll watchers aren't equal to poll workers, as they both do different jobs.

A poll worker's responsibility is to check in voters and issue them ballots, according to the Iowa Secretary of State's poll worker website.

RELATED: How you can work at the polls this November

The Poll Watchers Guide, as well as the poster below, will be our resources for additional information.

Poll watchers are also known as "challenging committees" or "observers", and those acting as challengers must be registered voters in the county where the challenge occurs. (We'll go over challenges later on in this article.)

The guide was prepared by the Iowa Secretary of State and revised in January 2018.

RELATED: How you can work at the polls this November

What is a poll watcher's job?

Poll watchers observe the election process. They do not interfere with the process. Here's what they are intended to do at the polls:

At the absentee precinct

Poll watchers can leave the room to report the names of voters whose ballots were rejected without being opened.

On the other hand, poll watchers cannot interfere with the duties of the Absentee and Special Voters Precinct (ASVP) board.

Interference includes but is not limited to handling ballots and communicating or attempting to communicate information regarding the progress of the count while the board is counting ballots.

Poll watchers are prohibited from being present at a hospital, assisted living program or health care facility during the time that the special precinct election officers are delivering absentee ballots.

How are poll watchers selected?

The Poll Watchers Guide says poll watchers are appointed by the following:

There is an exception for that last point: poll watchers for public measures are not allowed for primary and general elections. You won't see those poll watchers Nov. 3.

Poll watchers need to provide written permission at the polling place or absentee voting precinct to show they have been appointed to be a poll watcher.

Candidates nominated by petition and NPPOs appointing poll watchers can use the "Poll Watcher Designation Form" as permission. Political parties must provide credentials to poll watchers, however, they do not need to fill out the form.

Poll watchers that represent groups opposing or supporting public measures must fill out the form with their county auditor before Election Day. Auditors will appoint poll watchers and let them know when they can serve as a poll watcher.

These poll watchers will not be allowed for the 2020 General Election.

Get the latest election results here on election night.

How many poll watchers are allowed at polling locations?

There is a limited number of poll watchers that can work in one polling place.

Once the polls are closed, the process of counting ballots is open to the public.

However, no one other than Precinct Election Officials (PEO) may handle ballots or participate in the count.

Absentee precinct while ballots are counted

The only poll watchers allowed by law to be in the room when the ASVP board is counting ballots on Monday or Tuesday before the polls close are:

After the polls close, the process of counting ballots is open to the public.

What are challenges? What do they mean for voters?

A challenge happens when a poll watcher or a PEO questions the qualifications of any person voting.

These challenges must be made before the challenged voter casts their ballot, and a poll watcher needs to tell the PEO of their intent to challenge a voter. It is the PEO's job to tell the voter if there's a challenge to their qualifications.

Challenges must be made in writing with a "Challenger's Statement" form that's provided by the Secretary of State. The form must be signed and describe the specific reason(s) for the challenge.

PEOs do not have to fill out the form.

A separate form must be used for each challenge made, blanket challenges are prohibited by Iowa law.

Challenges can be brought against a voter by claiming the voter is one of the following:

Voters cannot be challenged solely because they are updating their address at the polls on Election Day or if they are registering to vote then.

Challenges at the polling place

A PEO and the poll watcher can ask the challenged voter questions to determine the qualifications of the voter. Poll watchers can only ask questions if the PEO lets them do so.

The poll watcher and PEO may ask:

The voter can show evidence to support the fact that the voter is qualified to vote. Click/tap here to see what kind of evidence can be shown.

A challenge can be withdrawn at the polling place or at anytime before the ASVP board meets to consider provisional ballots and challenged absentee ballots.

Challenges at the absentee precinct

Poll watchers and ASVP board members can challenge absentee ballots at any time before ballots are removed from the affidavit envelopes.

The auditor must notify the voter of the challenge and set aside the voter's absentee ballot. The notice must include information about when the voter must present evidence to support their qualifications to vote.