Pence made a campaign stop at the Iowa State Fairgrounds before attending a Heritage Action town hall. 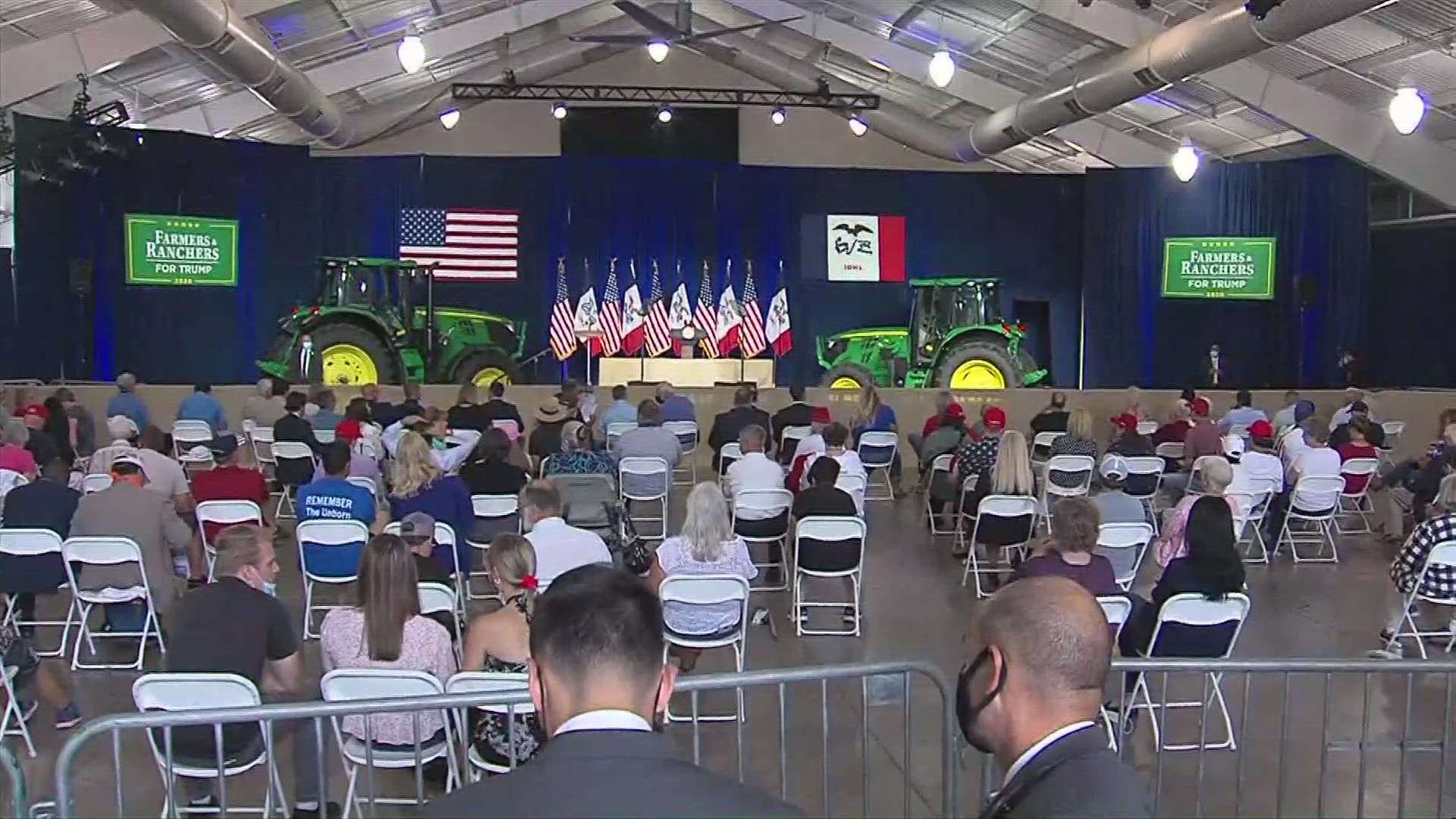 NOTE: Pence's full remarks in Des Moines can be viewed above

Pence, who last visited Iowa in June, arrived at the Des Moines International Airport shortly after noon before delivering remaerks at the Iowa State Fairgrounds to launch the "Farmers and Ranchers for Trump" coalition.

"As you in the Hawkeye State and people all across the country continue to contend with this pandemic, we will not rest. We will not relent," Pence said. "We will spare no expense and no effort until Iowa and America put the coronavirus in the past and we bring America all the way back. We open up America and open up America's schools."

Pence also touted the United States-Mexico-Canada Agreement, which he said will expand market access for U.S. dairy, egg and poultry.

After the event, Pence attended a Heritage Action town hall to launch the “Fight for America” campaign.

Vice President @Mike_Pence begins event in Des Moines saying Iowa farmers devastated by the #derecho have the support of the President and his administration. pic.twitter.com/ft2q0Sh6WX

Thank you, Iowa! It is great to be back in the Hawkeye State with @KimReynoldsIA, @joniernst and the men and women of Farmers and Ranchers for Trump! This President and this entire Administration has never wavered in its support of the agriculture community and we never will! pic.twitter.com/T1OJ2nntpK

I was briefed today by @IAGovernor, @joniernst, @MikeNaigIA, and local farmers on Monday’s destructive derecho here in Iowa. Like I said to the farmers: President @realDonaldTrump and I are with you and we’ll make sure you have what you need to recover from this storm. pic.twitter.com/WJp4cmTAt4

Hello Iowa! Here in the Hawkeye State, President @realDonaldTrump has delivered for Farmers and Ranchers. With Canada and Mexico being two of Iowa’s largest trading partners, the historic #USMCA will increase wages, jobs and economic activity for years to come.

Great meeting frontline personnel of TSA, HSI, & CBP based in Des Moines. They represent the best of us, selflessly putting mission above self. DHS will continue safeguarding the American people because of the dedication, sacrifice, and professionalism of men and women like them. pic.twitter.com/BPSObP8J6d

Glad to join the @VP in Iowa today to share our support for the entire law enforcement community. The men and women who make up our law enforcement are the thin blue line keeping our communities safe and prosperous.

The vice president will wrap up his visit with the Republican Party of Iowa state dinner.