VERIFY: Yes, RBG wore different collars depending on whether she agreed of disagreed with a Supreme Court decision

In the wake of Ruth Bader Ginsburg's passing, many people have been wearing different colored collars in her honor. Why? 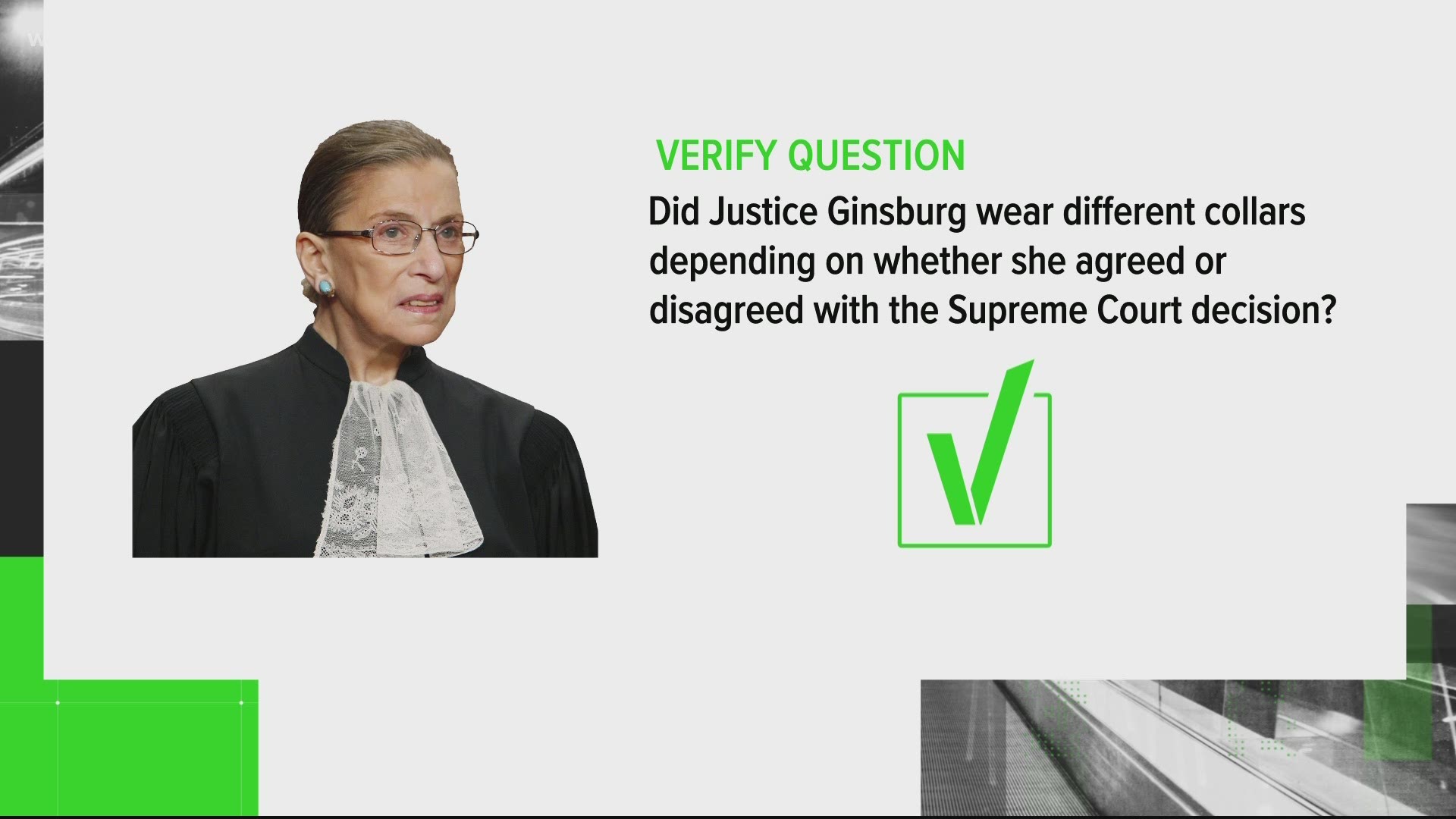 WASHINGTON — Our Verify exists to fact-check the things you read online. All over the internet, people are paying homage to Justice Ruth Ginsburg by donning a jabot, a specific type of collar, to commemorate her iconic look.

By rocking the look, some are also curious as to when and why Justice Ginsburg wore them in the first place. Some have dropped a wide range of theories, including this one:

QUESTION: Did Justice Ginsburg wear different collars depending on whether she agreed or disagreed with the court decision?

So let’s Verify, is that true?

ANSWER: Yes, she did have specific collars for specific court decisions.

When asked about her fashion, Justice Ginsburg held up a black collar and said quote “Well this is my dissenting collar."

When Couric asked her why, Ginsburg said “It looks fitting for dissents.”

Next, she held up what she called her majority opinion collar, saying: “So when I’m announcing an opinion for the court, this is the collar I wear.”

Credit: AP
FILE - In this Jan. 24, 2012, file photo Supreme Court Justices Ruth Bader Ginsburg and Stephen Breyer listen to President Barack Obama deliver his State of the Union address to a joint session of Congress at the Capitol in Washington. Ginsburg didn’t put on her judge’s robe without also fastening something around her neck. Ginsburg called her neckwear collars, or jabots, and they became part of her signature style, along with her glasses, lace gloves and fabric hair ties known as scrunchies. (AP Photo/Evan Vucci, File)

During a 2009 C-SPAN interview, Ginsburg showed off one of her favorite collars and explained that since the standard robe is made to show a man’s shirt and tie, she and Sandra Day O’Connor decided they should include something feminine for their robes.

So we can Verify, yes, RBG said she had different collars she wore depending on whether she had a dissenting opinion or delivered the majority opinion.

Here's just a handful of pictures from those rocking RBG's signature look:

Spent these past two days very sad and quiet over the passing of RBG, a woman I’ve admired for years. Maude has been honouring Justice Ginsberg in her own small way too, by wearing the dissent collar pin gifted to me by my friend @szechuan pic.twitter.com/95KQItNPYQ

Wearing my own “collar of dissent”in RGB’s memory as she lies in repose at the Supreme Court.
“So that’s the dissenter’s hope: that they are writing not for today, but for tomorrow” #RBG #mayhermemorybearevolution pic.twitter.com/VUIe4FoIiQ

Missing my hero so I decided to reread one of my favorite books & wear her signature collar. #RBG #WomenInHistory #MondayMood #education #booklove pic.twitter.com/WvsdD5EVop

RELATED: Here's the difference between 'lying in state' and 'lying in repose'