VERIFY: Are some groups more likely to report vaccine side effects?

Some people experience side effects from the COVID-19 vaccine, while others don't. Are there specific groups more likely to report feeling them? 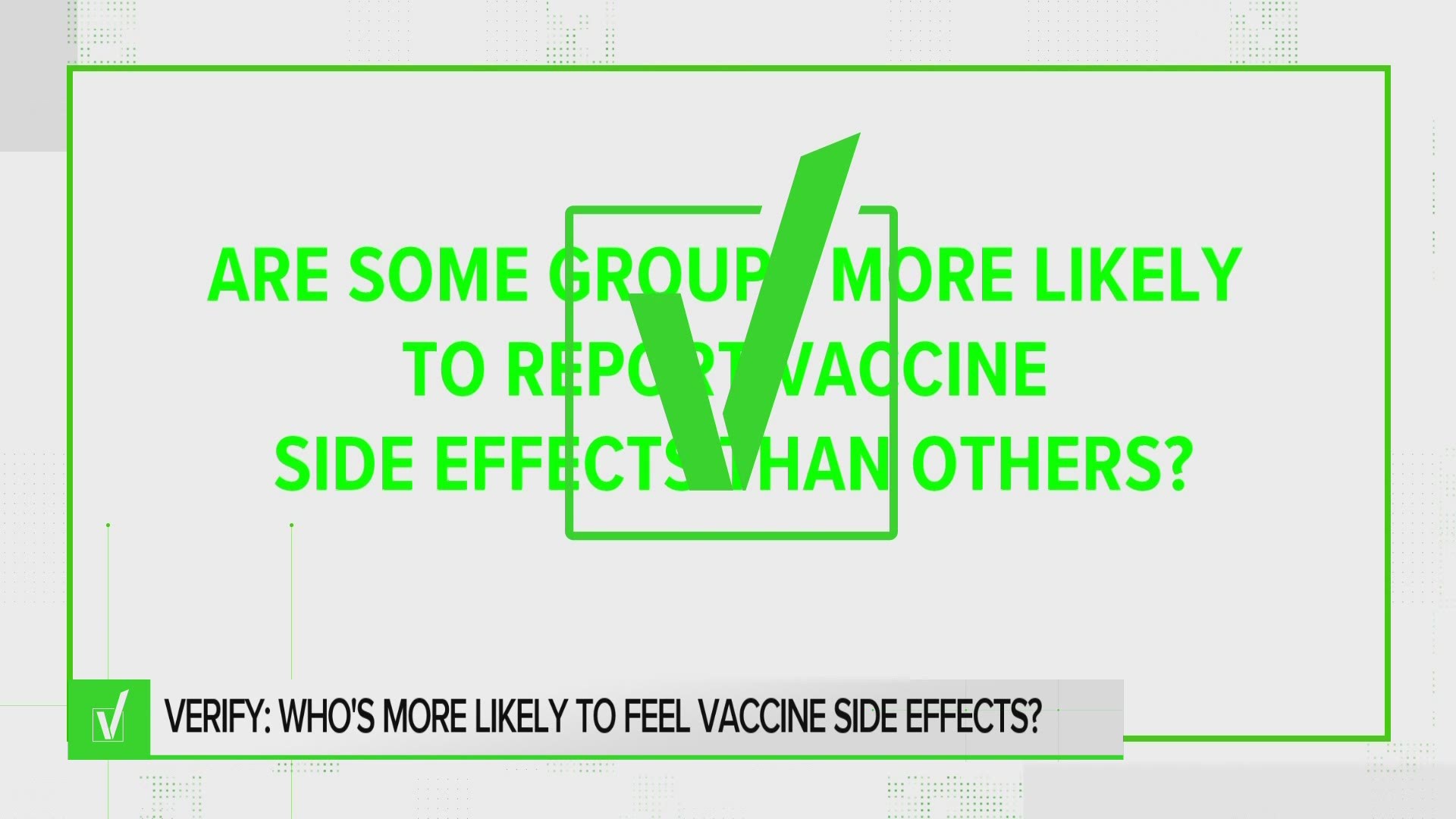 CHARLOTTE, N.C. — According to doctors, side effects from the COVID-19 vaccines are normal and expected. The short-lived, under-the-weather feeling is the body's immune system ramping up.

But while most people have come to expect these feelings, there are some who feel nothing at all after vaccination.

Are some groups more likely to report vaccine side effects than others?

Yes. Data from clinical trials of all three U.S.-available vaccines shows younger people were more likely to report side effects. The Centers for Disease Control and Prevention also analyzed COVID-19 vaccine side effects reports from mid-December to mid-January and found the share of reports coming from women was higher than their share of the vaccinated population.

The February report noted nearly 79% of reported side effects came from women, even though they made up 61% of the vaccinated population at that time.

UPDATE: 24 hours after my 2nd Pfizer vaccine dose, I feel 100%, no side effects I can feel. Felt good enough to do this 4 mile hike with the family! #GetVaccinated https://t.co/vkmCVHOE93 pic.twitter.com/IUVtrO2hZ5

Food and Drug Administration briefing documents for the Pfizer, Moderna, and Janssen (Johnson and Johnson) COVID-19 vaccines show the threshold for what researchers considered the "younger" group varied from brand to brand, but generally, the term applied to people younger than 55 to 65 years of age.

Doctors stress that these side effects are generally mild and manageable without much intervention. However, they say that people can mitigate any discomfort by taking over-the-counter pain relievers after the shot, using a warm or cold compress on the injection arm, getting the injection in the non-dominant arm, and scheduling a second dose when it is possible to relax the next day.

"The symptoms all tend to resolve within 24 to 48 hours," Passaretti said.

Have a relative or friend in another state and want to know when they can get vaccinated? Visit NBC News' Plan Your Vaccine site to find out about each state's vaccine rollout plan.