Former Vice President has warned Social Security will run out of funds by 2023 if President Trump gets his way. Does this claim pass the Verify test? 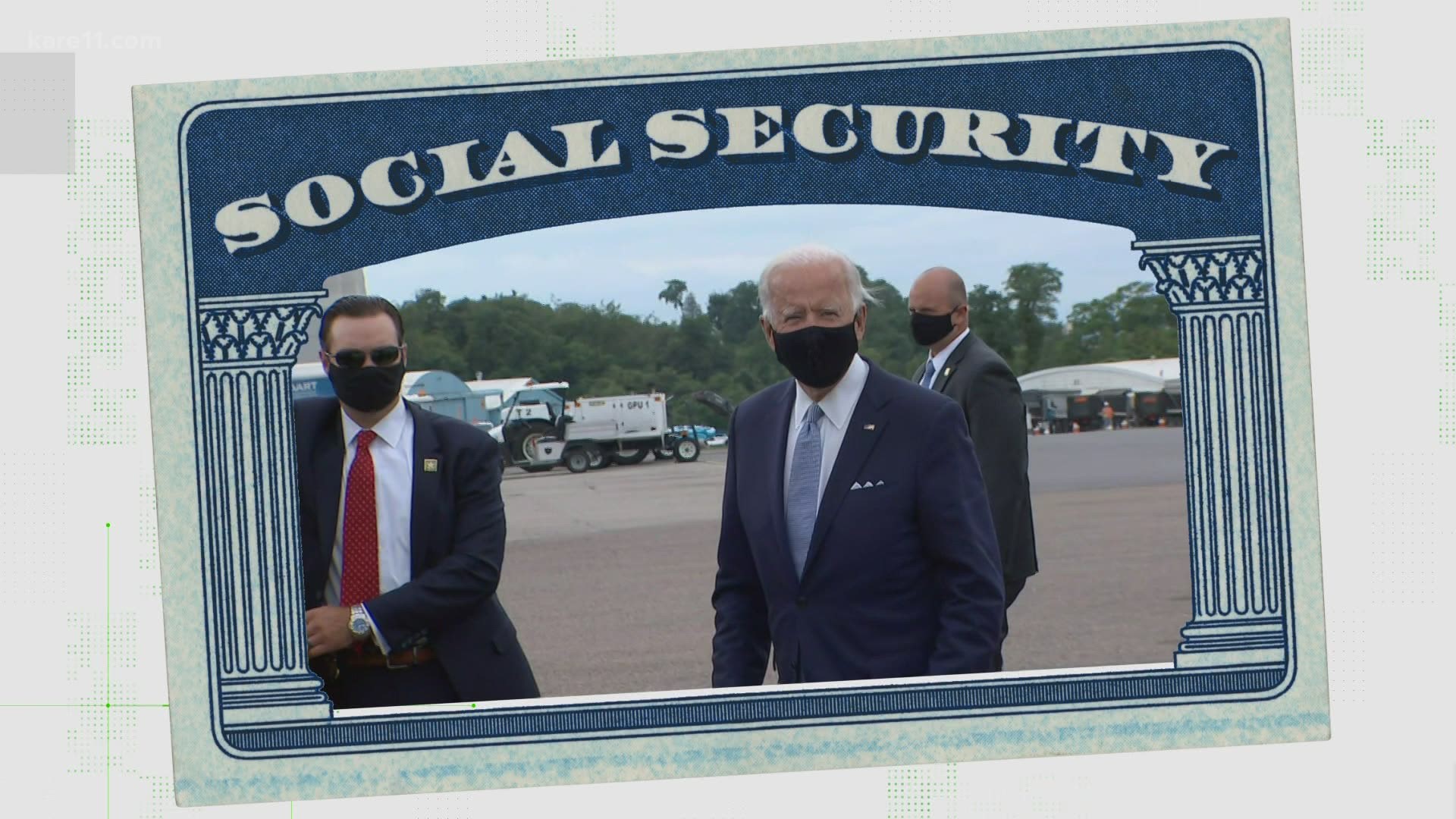 MINNEAPOLIS — Former Vice Joe Biden has made saving Social Security a key campaign issue, with dire warnings about what could happen to the system under a proposal from President Trump.

It has become part of the Democratic presidential candidate's speeches and television ads. Quite simply, he warns Social Security funds would be exhausted by the middle of 2023 if President Trump implements a proposal to end the payroll tax.

"He's proposing to eliminate a tax that pays for half of Social Security," warns one Biden campaign ad.

"Social Security would become depleted by the middle of calendar year 2023," warns another.

This claim is based on something the president said at least twice in August of 2020.

"After I hopefully get re-elected, we'll be terminating the payroll tax."

He's talking about the FICA payroll withholding tax that pays for Social Security and Social Security Disability benefit. It's a 12.4% tax, split evenly between employers and employees. Self-employed persons also pay into the fund.

After the president made that announcement a group of US Senate Democrats asked the Social Security Administration's top numbers guy, Chief Actuary Stephen Goss, to predict how long the system could last without the payroll tax.

Goss wrote back to say if the tax were to go away in January of 2021 and no other source of revenue replaced the tax, the main funds would be depleted in mid-2023.

So that's where the prediction in the Biden ad and speeches come from, a nonpartisan government expert's prediction of how quickly Social Security funds would be depleted if employees and workers stopped paying that part of federal withholding taxes.

Possible but not probable

Goss said he normally does this type of fiscal analysis on actual legislation, not ideas in the abstract. In other words, it would take an act of Congress to end the payroll tax permanently. President Trump can't change tax law by himself.

And, the president's aides later pointed out, he didn't mean to propose ending the payroll tax altogether.

"What he was meaning yesterday is he wants permanent forgiveness of the deferral," White House spokesperson Kayleigh McEnany told reporters.

"He wants to make that a permanent forgiveness of the deferral."

The president signed an executive order in August giving employers the option to defer, or postpone, withholding Social Security taxes from our paychecks until January.

Most companies, including KARE's parent company TEGNA, have opted against that because they expect they'd have to take more out of paycheck next year to make up for what was deferred. Federal government employees were not allowed to opt out of the tax deferral.

As McEnany explained it, President Trump was pitching the idea forgiving the deferred 2020 payroll taxes, not permanently ending that tax.

So, if you take into consideration the president didn't mean what it sounded like he was saying and if you consider he lacks the capacity to end that tax single-handedly, then the ad becomes misleading at best and mostly false.

Yes, in theory, if Republicans gained control of both the House and Senate during a Trump second term, they could repeal the payroll tax and cripple Social Security. The president has actually pitched ending the payroll tax, calling it the fastest form of economic stimulus.

One could argue that former Vice President Biden has leeway to make such an accusation because, after all, it is something President Trump said in public settings more than once.

But most experts believe Congress would never deliberately pass a bill that would sabotage the Social Security system in such a dramatic fashion.

At another meeting, the president said any hole left in the Social Security trust funds could be replenished with General Fund money, in other words dollars taken from other parts of the federal government's operating budget.

The General Fund is already deeply in the red due to the 2017 tax reforms, the cost of responding to the coronavirus pandemic and the revenue lost from the forced economic downturn caused by the virus.

When asked about adding more debt by using General Fund dollars to offset the loss of the payroll tax, the president predicted the mammoth deficit will be eventually be erased by economic growth.

An expanding economy would tend to boost tax revenues and refill part of the government's coffers, but most economists don't believe it could grow fast enough to offset the loss of Social Security payroll taxes.