Johnny Majors was inducted into the College Football Hall of Fame in 1987. 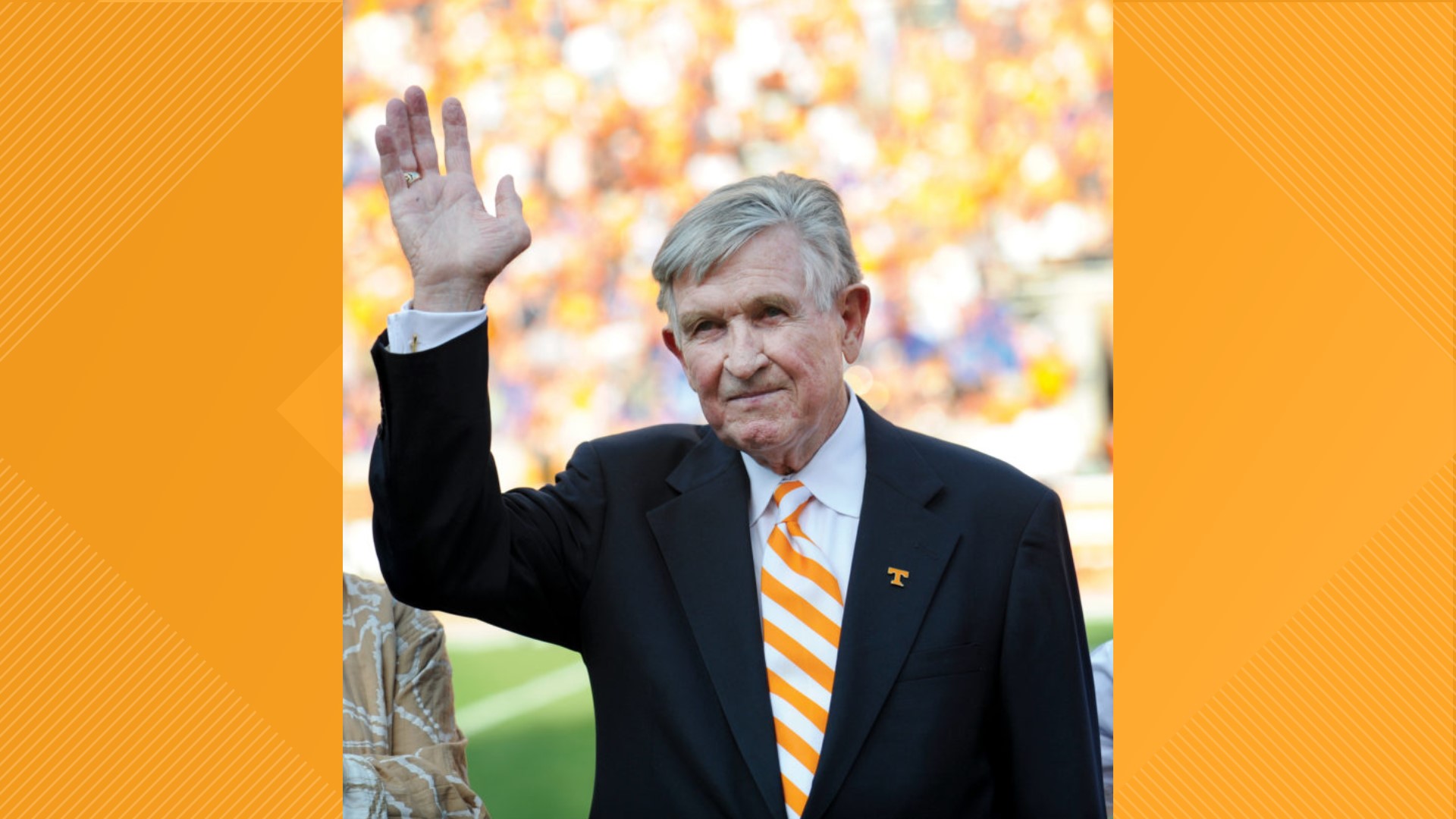 KNOXVILLE, Tenn — College Football Hall of Famer Johnny Majors, the coach of Pittsburgh’s 1976 national championship team and a former coach and star player at Tennessee, died Wednesday. He was 85.

Majors died at his home in Knoxville, according to his wife, Mary Lynn Majors. “He spent his last hours doing something he dearly loved: looking out over his cherished Tennessee River,” she said in a statement first given to Sports Radio WNML.

He was inducted into the College Football Hall of Fame in 1987. Tennessee retired Majors’ No. 45 jersey in 2012.

“Dynamic on the field. Fierce on the sidelines. Distinguished Tennessean,” Tennessee's football program tweeted. “We mourn the loss of legendary player and coach Johnny Majors — a man who left an indelible mark on Tennessee Football.”

Majors starred at Tennessee from 1954-56 as a single-wing tailback and punter. He went on to a successful coaching career and had his greatest year in 1976, when he led Pitt to a national championship with a team featuring Heisman Trophy winner Tony Dorsett.

“He led us to our greatest glory and changed Pitt forever,” Pitt's football program wrote on Twitter. “Thank you, Coach. Rest in peace.”

Majors starred at Tennessee from 1954-56 as a single-wing tailback and punter and twice was named the Southeastern Conference player of the year.

During the 1956 season, Majors rushed for seven touchdowns, threw five TD passes and punted and returned kicks while leading Tennessee to a 10-1 record and Sugar Bowl appearance. Majors finished his Tennessee playing career with 1,622 yards rushing and 1,135 yards passing.

He proved even more successful in the coaching ranks.

Majors began his head coaching career in 1968 at Iowa State. Three years later, he led the Cyclones to their first bowl bid in school history. He posted a 24-30-1 record at Iowa State from 1968-72 before Pittsburgh hired him away.

Pittsburgh was coming off a 1-10 season when he took over and had won a total of 23 games in the nine years preceding his arrival. Majors went 33-13-1 in four years there and led Pittsburgh to a 12-0 record and national title in 1976.

“It was a team without a real weakness, one of the greatest college teams of the last two decades,” Majors wrote in his 1986 book “You Can Go Home Again.” “I realized even then that I was a very fortunate man. Few people in our profession ever have the experience of working with a team that good.”

After that title-winning season, Majors returned to his alma mater to take over Tennessee’s program. In his book, Majors said that “it was the most difficult decision I’ve ever had to make.”

Majors missed the first three games of the 1992 season while recovering from heart bypass surgery. The Volunteers, coached by offensive coordinator Phillip Fulmer, got off to a 3-0 start. Majors returned for the fourth game, but he was forced out and replaced by Fulmer after Tennessee finished the regular season with an 8-3 record.

Majors returned to Pittsburgh the following year and went 12-32 as the Panthers’ coach from 1993-96.

Majors was born in Lynchburg, Tennessee, and grew up there and in nearby Huntland. His father, Shirley Majors, was a longtime football coach at the University of the South in Sewanee.

He was an assistant coach at Mississippi State and Arkansas before becoming a head coach.