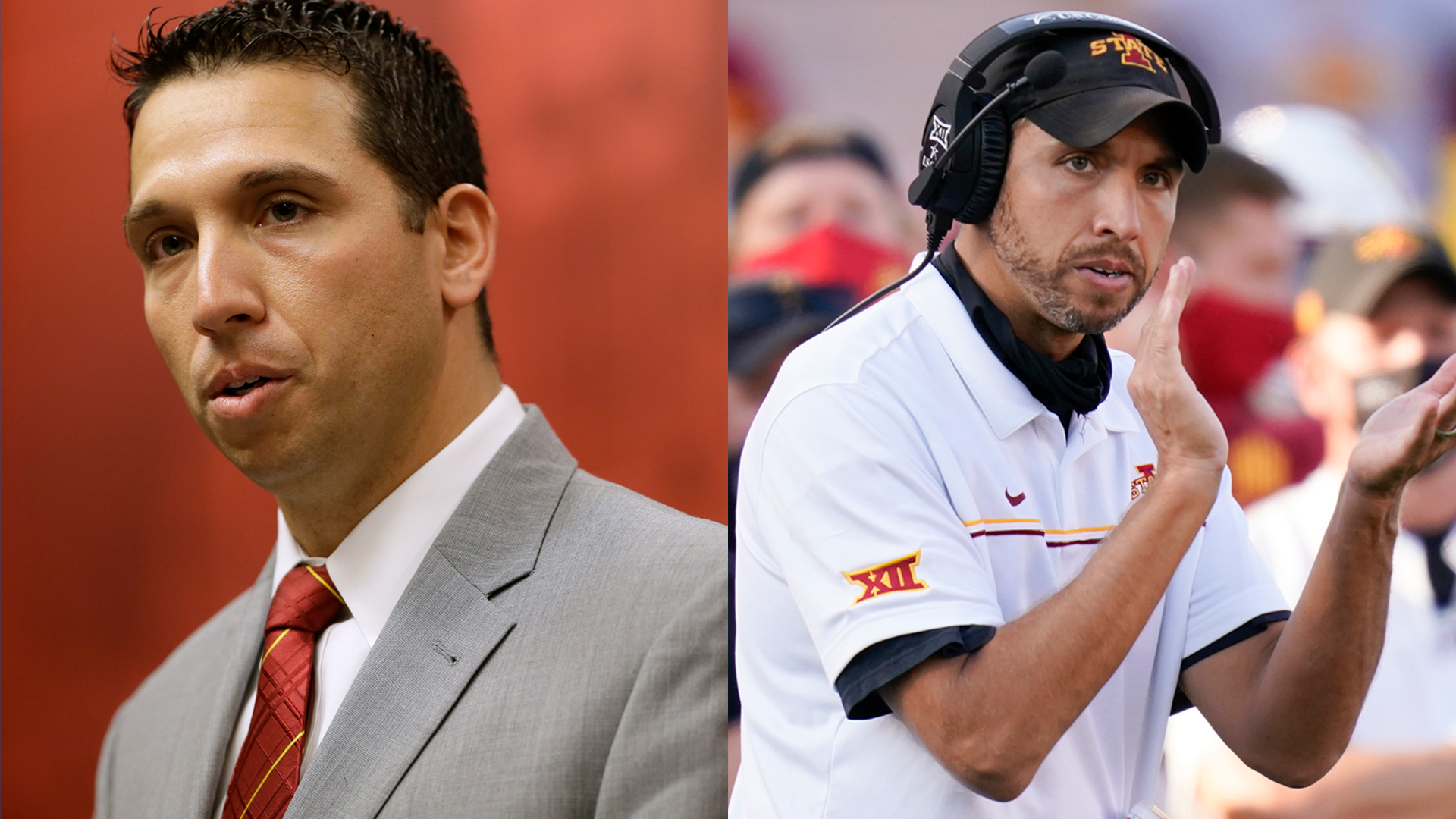 Iowa State saw its final hopes at the College Football Playoff fade away Saturday following a 27-21 loss to Oklahoma in the Big 12 Championship Game.

The teams had already met this year—a 37-30 ISU win in Ames on Oct. 3—but that was the last loss the Sooners have suffered, who have now reeled off seven straight wins after a 1-2 start to the year.

The Cyclones had a rough start to the year as well, falling to Louisiana 31-14 to begin the season on Sept. 12. Since then, Matt Campbell's squad has gone 8-1, with its defeat in that stretch a 24-21 loss to Oklahoma State on Oct. 24.

Brock Purdy was 27-for-40 on the day with 322 yards, one touchdown and three interceptions. The final INT came during the Cyclones' final drive while in OU territory.

After falling behind 24-7 at halftime, the Iowa State defense held Oklahoma to 121 yards and three points in the final two quarters.

Final stats can be viewed here

1:05 | Offense late to get to the line and Purdy snaps it quick. Hurrying to his left, he throws it up in the air and OU's Tre Brown picks it off.

1:28 | Hutchinson with the 1-yard reception and there's another flag. 15-yard facemask on OU. Brings to ball to the Sooner 33.

1:55 | Kene Nwangwu brings the kickoff to the ISU 30. The Cyclones have one timeout remaining.

2:01 | Pass on third down is incomplete and the OU field goal is good.

2:11 | Rattler keeps it again on the read option, gets to the outside and picks up five. ISU calls their second timeout.

2:19 | Rattler keeps it on the read option but nothing doing. Cyclones call their first timeout.

3:30 | Stevenson sidesteps a couple defenders and picks up five. The clock is important now. ISU has all three timeouts remaining.

4:20 | Rhamondre Stevenson loses a yard on first down. Rattler hits Brayden Willis for a big first down to the ISU 42 on second down.

5:06 | OU's Tre Brown with another good kickoff return. Sooners will start at their own 44.

5:45 | Breece Hall catches the short Purdy pass and takes it all the way down 6.

6:30 | The completion to Xavier Hutchinson is overturned upon replay. On 2nd and 10, Hutchinson gets it again and picks up the first down.

8:10 | Sean Shaw Jr. with the catch and another ISU first down. Hall follows it with a run for a few and the Cyclones are in OU territory.

8:53 | Hall goes nowhere on first down and Purdy fires deep downfield but incomplete on second down.

12:00 | Purdy completes a pass but is well short of the first down. Punt team coming out.

18,720 in attendance. Not sure you can get more than that in a socially distanced situation.

0:12 | OU lines up offside again but no matter. Breece Hall jumps over the goal line for the TD.

1:37 | Charlie Kolar brings in the Purdy pass to convert the third down.

6:40 | After Rattler picks up a first down with his legs, he throws for another one. OU down to the ISU 37.

Fair catch by Oklahoma at their own 30.

Milton with another fair catch and ISU will start at their own 23.

10:05 | After evading more pressure, Purdy sails it high and OU's Pat Fields is there for the INT. Pass was intended for Chase Allen.

14:11 | Woodi Washington breaks up the pass intended for Landon Akers. 3rd and 9 coming up.

14:47 | Iowa State starts the half with the ball and a Breece Hall run that goes nowhere.

0:49 | Rhamondre Stevenson with a run to pick up another first down. 1st and goal at the 9.

2:45 | Purdy sacked, but OU flagged for a face mask during the tackle and ISU has a 1st and 10 in Sooner territory.

On the next play, Purdy fires a strike complete to Landen Akers. ISU now at the OU 22.

5:21 | Purdy fires it into the endzone but Tre Norwood picks it off. OU with the red zone INT.

6:03 | Cyclones go for it anyway. Purdy keeps it on the option read and is down to the OU 11. Campbell continues to jaw and point at the refs.

6:50 | Hall comes up short on 3rd and 2. Stuffed at the line of scrimmage. Offense stays on the field.

7:30 | Play action pass is complete to Dylan Soehner and just like that, ISU is in OU territory.

Breece Hall follows it up with a 9-yard run. Hall stuffed on 2nd down. 3rd down upcoming.

8:35 | Brkic kicks the ball out of bounds, which might be a small shot of energy for ISU as they'll start from their own 35.

8:40 | Pass broken up by Arnold Azunna, who came in to replace the ejected Isheem Young. 4th down.

11:30 | After a false start, OU punts and it is downed at the 1 yard line. ISU flagged for running into the kicker, but it is declined.

12:10 | Marvin Mims with another reception, but a couple yards short of the first down marker.

14:27 | Following a chop block penalty against Darrell Simmons Jr., Purdy throws incomplete. False start on Colin Newell pushes ISU back to a 2nd and 27 on their own 8 yard line.

Rattler snaps the ball again before the clock expires and it's nearly picked off but falls into the arms of Marvin Mims. First down at the ISU 45.

1:27 | Connor Assalley is no good on the 43-yard field goal attempt. Hits off the right and lower crossbar. Still 7-0 Oklahoma.

2:43 | Hutchinson takes a screen pass for a first down. ISU driving, now at the Oklahoma 28.

3:21 | Norman, Oklahoma native Charlie Kolar hauls in the Purdy pass for a 28-yard gain. Breece Hall follows that up with 9 yards on a 1st and 10 run.

4:19 | Iowa State forces an incompletion on 3rd and 9. Cyclones brought pressure up the middle.

6:21 | Rattler throws it up and Jaden Haselwood comes down with it at the ISU 17.

6:47 | OU now inside the ISU 40 after back-to-back completions from Rattler.

9:09 | Starting at their own 13, OU starts with a 15-yard completion to Rhamondre Stevenson.

9:55 | Purdy gets the ball to Hutchinson again on 3rd and 8 but he's a couple yards short. ISU punts.

11:30 | ISU starts from their own 25. Breece Hall 9-yard run plus a completion to Xavier Hutchinson gives the Cyclones a first down.

12:05 | Chandler Morris, OU's third-string quarterback, runs the option in for a 2-yard touchdown. Extra point is good and OU is up 7-0.

14:27 | Starting from their own 25, Oklahoma starts with a 3-yard run and a 13-yard pass. Asheem Young flagged for targeting but the play is under review.

Ruling is confirmed and Young is disqualified.

15:00 | ISU wins the toss and defers to the second half. Kickoff goes out of bounds and OU will start with good field position.

You will see this a lot today on Iowa State Twitter so I’ll go ahead and throw this out also. pic.twitter.com/UXDBAcigtd

Let's talk College Football Playoff. The Cyclones, ranked No. 6 in the CFP, have an outside chance at making it into the Playoff.

Here's how it could work, per ESPN:

So in this case we've got the No. 5 and No. 6 teams battling for a clear open spot -- in the Predictor's mind -- after Clemson is knocked out. Both Texas A&M and Iowa State pick up wins over championship weekend, but the No. 6 team earns the better victory and earns a conference championship. Is that enough? The Predictor leans yes. It's close though: Iowa State would have a 36% chance to get in and Texas A&M would have a 31% shot. I've already noted that Iowa State's inclusion in the playoff would be completely nonsensical, but we're not really here to talk about who should get in, but rather who will get in. The Cyclones do have a shot.

A Tennessee win would greatly help ISU in its chase for a CFP spot.

We 𝙉𝙀𝙀𝘿 to know who's in.

Another game of note: The Sun Belt Conference Championship Game between No. 19 Louisiana and No. 12 Coastal Carolina (who is undefeated) has also been canceled due to COVID-19 protocols.