AMES — After over six hours of football, the Iowa Hawkeyes are taking home their fifth straight Cy-Hawk Trophy by an 18-17 score. The 67th meeting between the H... 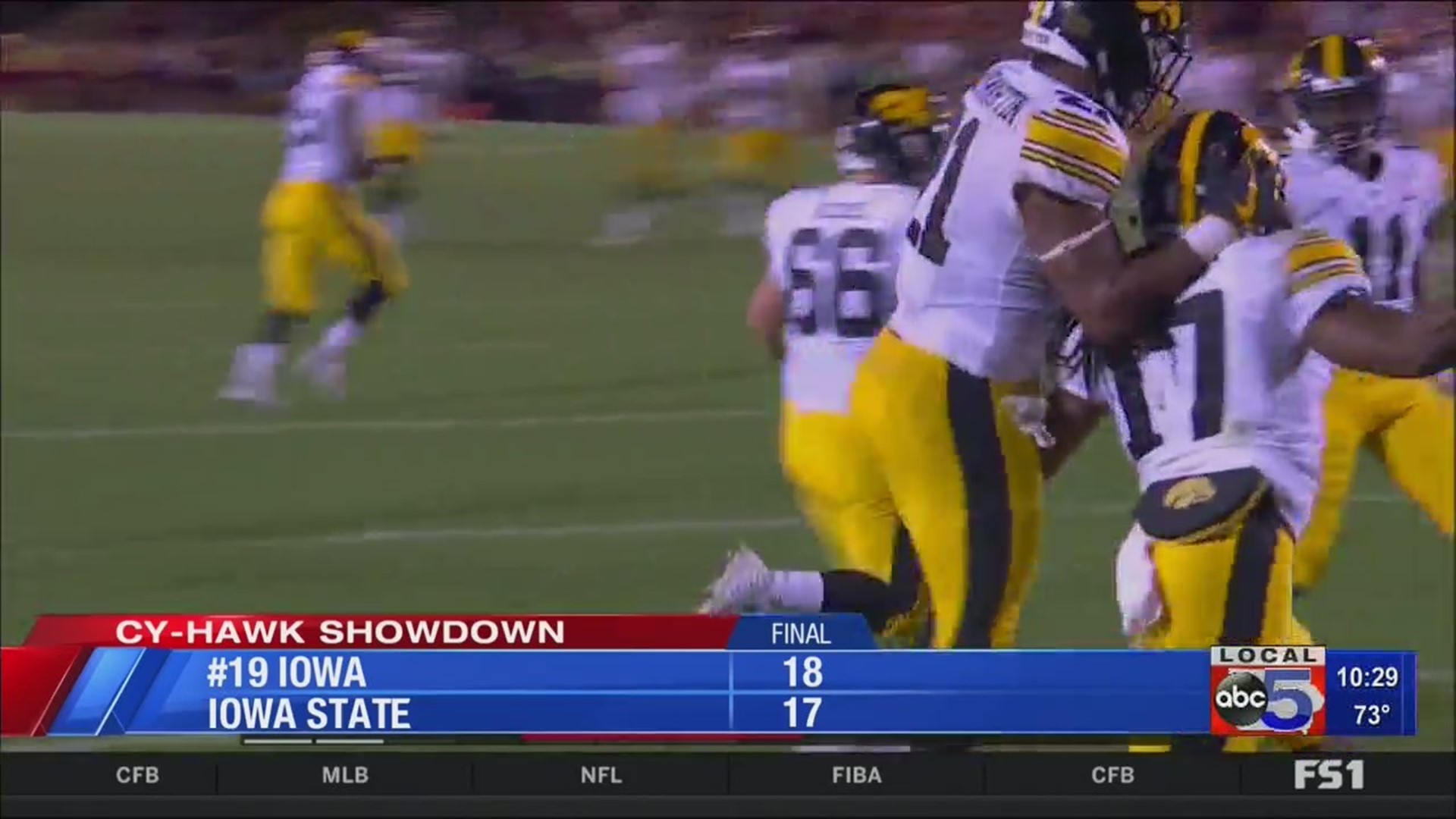 AMES — After over six hours of football, the Iowa Hawkeyes are taking home their fifth straight Cy-Hawk Trophy by an 18-17 score.

The 67th meeting between the Hawkeyes and Cyclones featured both thunderstorms and sunny skies, with the first half lasting four hours and 21 minutes due to two weather delays, each of which stalled momentum for whichever team had it.

Iowa started off strong, driving down the field on the first offensive possession and kicking a field goal to go up 3-0. Not long after, lightning struck, sending both teams to the locker room for a 49 minutes.

After the delay, Iowa State stunned Iowa with a trick play for a touchdown to take a 7-3 lead. The momentum was theirs until lightning struck again and sent the game into yet another, longer weather delay.

The second quarter finally got back underway around 7 p.m. with a completely saturated natural grass field and a whole lot of football yet to be played.

The rest of the game would go by with no more delays, featuring big play after big play from ISU and the patented conservative approach from Iowa. The Hawkeyes went up by a point with 4:51 to go, but the Cyclone defense would stop them on their next possession to get the ball back with around a minute and a half left. Or so it would appear.

After stopping the Iowa offense in its tracks and burning their final two timeouts, the Cyclones were devastated on the ensuing punt. Two ISU players collided just in time for the punted ball to bounce off of one of their backs, and the Hawkeyes jumped on top of it to regain possession and reclaim the Cy-Hawk Trophy.

It was a huge game for Cyclone quarterback Brock Purdy, with the true sophomore going 24 of 34 with 276 passing yards, including a 73-yard touchdown strike to fellow sophomore Tarique Milton.

On the other side, senior and three-year starter Nate Stanley threw 35 more passes without a pick, completing 22 of them for 201 yards and rushing for the Hawks’ only touchdown of the game.

The 19th-ranked Hawkeyes move to 3-0 with the win and will host Middle Tennessee next week. Kickoff time is currently TBD. They’ll start Big Ten play the week after when they face off against Michigan at the Big House.

With the loss, the Cyclones move to 1-1 on the year and will be back at Jack Trice next Saturday at 11 a.m. to face Louisiana-Monroe. They’ll kick off Big 12 play the week after when they head to Waco, Texas to take on the Baylor Bears.