State Wrestling Day 1: Class 1A and 3A opening rounds set the tone for traditional tournament

Class 1A and 3A State Wrestling opening round action from Wells Fargo Arena. 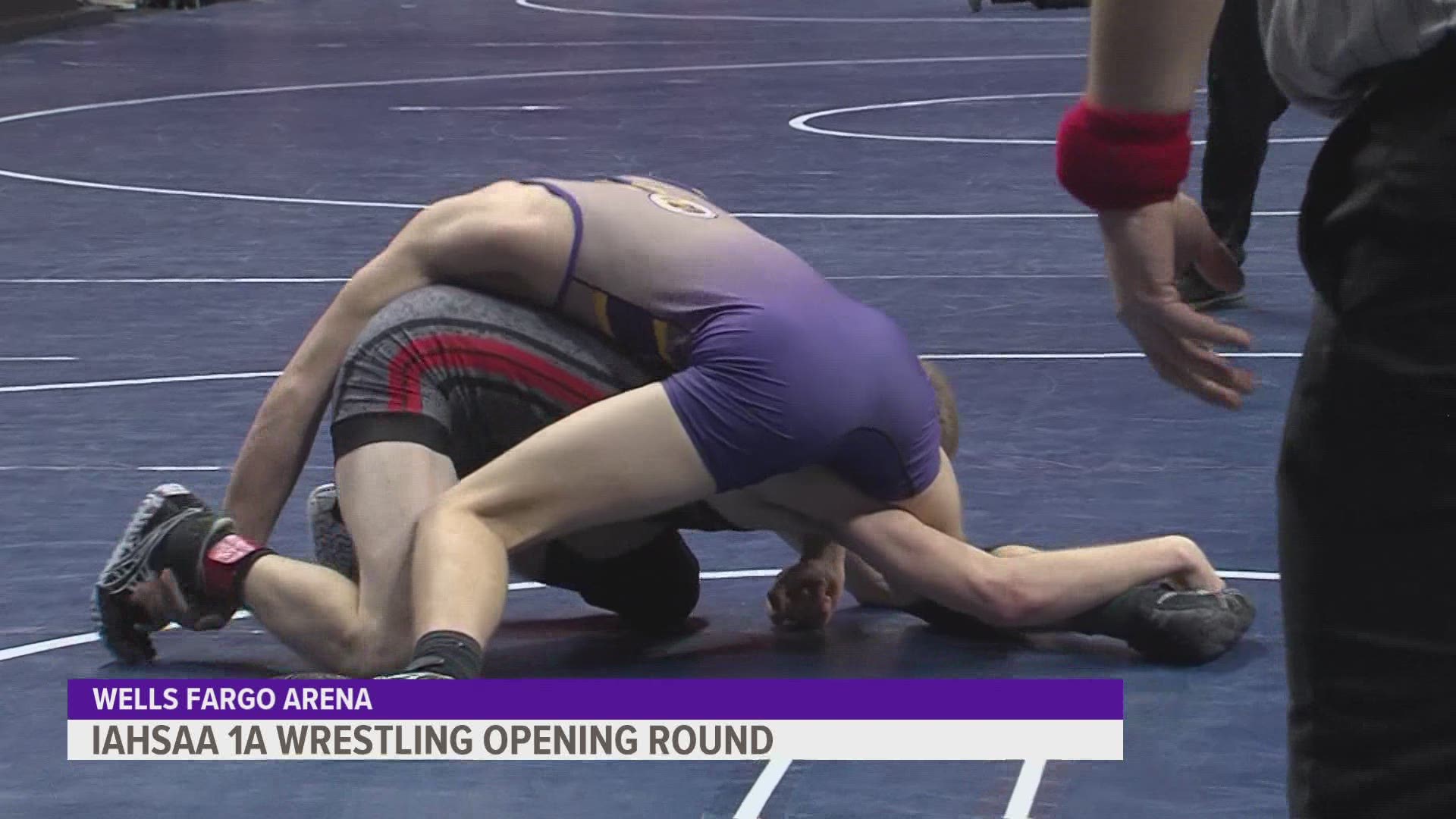 DES MOINES, Iowa — Around 5000 people in attendance for the first session of the day. Class 1A got us up and going first in the morning.

106 pound Drew Ehlen handled Trace Meyer throughout. He never trailed won by decision 6-1. His brother Trae, meanwhile, it's their second year here together, was wrestling at 145 he got 3 near falls and won by decision

At 120, Elliot Cooney of Nodaway Valley dominated he was up 7-2 with a near fall until the third period when he pinned Blaine McGraw to win by fall.

To 126, Kale Munson of Ogden looking to upset Ryan Steinlage. He gets a reversal to tie things up, but Steinlage too much late gets a near fall in the third period wins by decision.

In 138, Randy Jimenez from Southeast Warren was in a tighter one then he would've liked, down 3-2 going into the final period when he pulled away

Got a key reversal to win my decision 6-3

Jumping up to 182, Brody Sampson of Collins-Maxwell led the entire way but with 30 seconds left Greenfield flips momentum and gets the fall, he is moving on.

Moving up to 220, Tallen Meyers the second seed, wrestled like it, dominated he gets the takedown here ultimately wins by fall.

And we finish up 1A with 285 second seed Dane Johnson handles Aidan McFadden, pinning him and moves on.

Moving on to 3A at 106, just the third girl to wrestle in the tournament Jasmine Luedtke was pinned in the first period but she is just a freshman so plenty of time to get back here

Elsewhere in 106 undefeated Carter Freeman from Waukee with no troubles in the first round. He wins by fall

In 113, Aime Mukiza from DSM North had a couple reversals before narrowly falling by decision 8-6.

Moving on to 120, Cooper Hansen from SEP up on Tanner Wink gets a reversal but in the dying seconds, wink with a reversal to win 4-3 by decision.

At 126, Jacob Fistler from DCG gets a couple near falls before eventually winning by fall pushing his record to 45-3.

And then one of the big names at 132, wrestling up a weight class Drake Ayala, not surprising pins his first opponent he moves to the quarters.

At 138, a wild finish right at the final second Carter Drake of Carroll gets a takedown in the final seconds to force overtime then in the extra frame gets another takedown to upset Jackson Helmkamp.

In the big boys at 285 Iowa State bound, Gabe Greenlee. This guy is a monster and he didn't struggle much today, a first period pin which was exactly what he was trying to do.

And we'll finish things up at 152 future hawkeye Caleb Rathjen absolutely pummeled carter bennett, he moves on looking for another state championship.

RELATED: State Wrestling Day 1: Class 2A with some big wins, big pins and sets the stage for the quarterfinals