State Wrestling Day 2: Finals are set after thrilling semifinals on Friday night in class 3A, 2A, and 1A

23 central Iowa wrestlers will battle for a state title Saturday after wins in the semis Friday. That includes Centerville's Matthew Lewis chasing a 4th title. 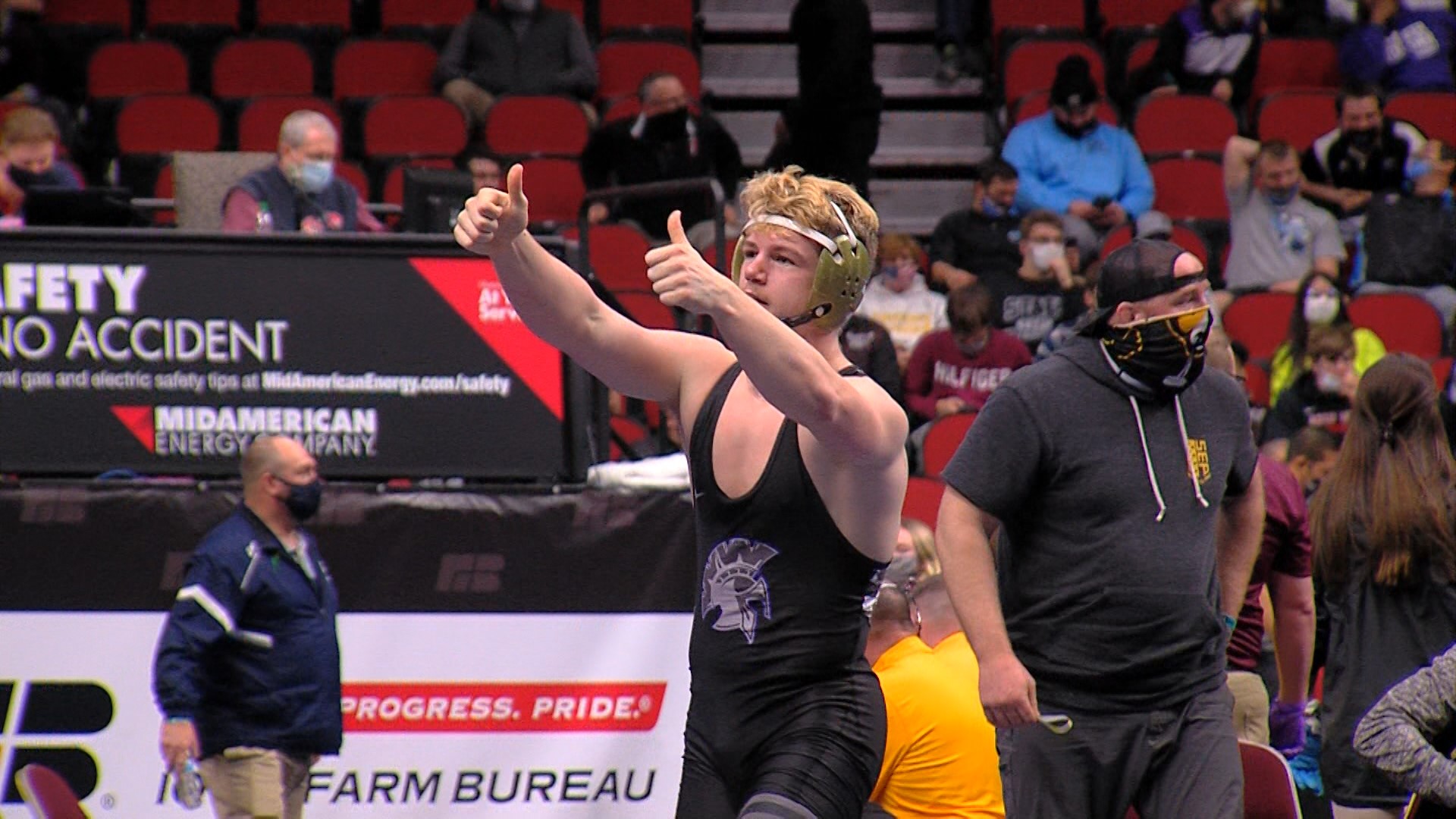 DES MOINES, Iowa — Start the night in 3A's 106 pounds, Waukee’s Carter Freeman going up against Fort Dodge’s Dru Ayala. It was tied late in the third, but Freeman lands a shot and gets the takedown. Je’ll be the favorite in tomorrow’s finals.

126 pounds, Waukee’s Thurman Christensen with a two point take down on his way to a 6-2 decision.

132 pounds, Drake Ayala trying to get to the title match against Ryder Block. Ayala dominates Bryce Parke with a 22-8 major decision.

145, Joel Jesuroga of Southeast Polk taking care of business in the semifinals, getting the w with 7-3 decision.

Caleb Rathjen of Ankeny at 152 pounds. He’s in the hunt for another title after getting a 12-3 major decision over Carson Martinson of Southeast Polk.

170 pounds, Mickey Griffith is back in the championship bout after he wins by 8-4 decision.

Up to 182, Griffin Gammell with a pin in the first period. A step further than a year ago, and he’s ready for Saturday’s final.

“ Just super freeing. This whole week has been freeing last year was always really stressed really nervous this year has been the complete opposite. I’m relaxed having fun. The process is what I enjoy not the result. I’m going to go in tomorrow give it my all if I die, I die," he said.

Let’s bounce over to class 2a

120 pounds, Greene County’s McKinley Robbins with a take down in the third. He goes on to win 4-2 and he is back in the finals for the second straight year as a sophomore.

Robbins said, “I love the feeling of making it to the finals two years in a row and I only plan on making it two more obviously because I want to win three titles. I fell a little short last year so that gave me a lot of extra motivation coming into this year.”

126 pounds, Dominik Ridout of East Marshall  would eventually get the pin and he’ll get a shot at a state title tomorrow.

138 pounds, Nate Genobana of Centerville with an 8-4 decision and he is a four time finalist chasing his first state crown.

His teammate at 145 pounds, Matthew Lewis, gets a second period escape and holds on in the third to win 3-2. Lewis trying to become Centerville’s second four-time champ, and he says he’ll rest easy tonight.

“I’m embracing it. It’s going to be party of my run so I can’t wait until tomorrow so.. "

What do you have to do to win number four?

"Put the right things in my body tonight get my head straight just make sure I’m ready for tomorrow, review a few matches and stuff and just show up for a fight.”

Then in class 1A the lone qualifier out of Central Iowa South Central Calhoun’s Blake McCallister down 1-0 in the third comes up with a late reversal he does go on to win his match and he’ll be in the finals on Saturday night.

RELATED: State Wrestling Day 1: Class 2A with some big wins, big pins and sets the stage for the quarterfinals

RELATED: State Wrestling Day 1: Class 1A and 3A opening rounds set the tone for traditional tournament