This was always going to be Sage Ohlensehlen's last swim season at the University of Iowa. Now, how her own career ends is the least of her worries. 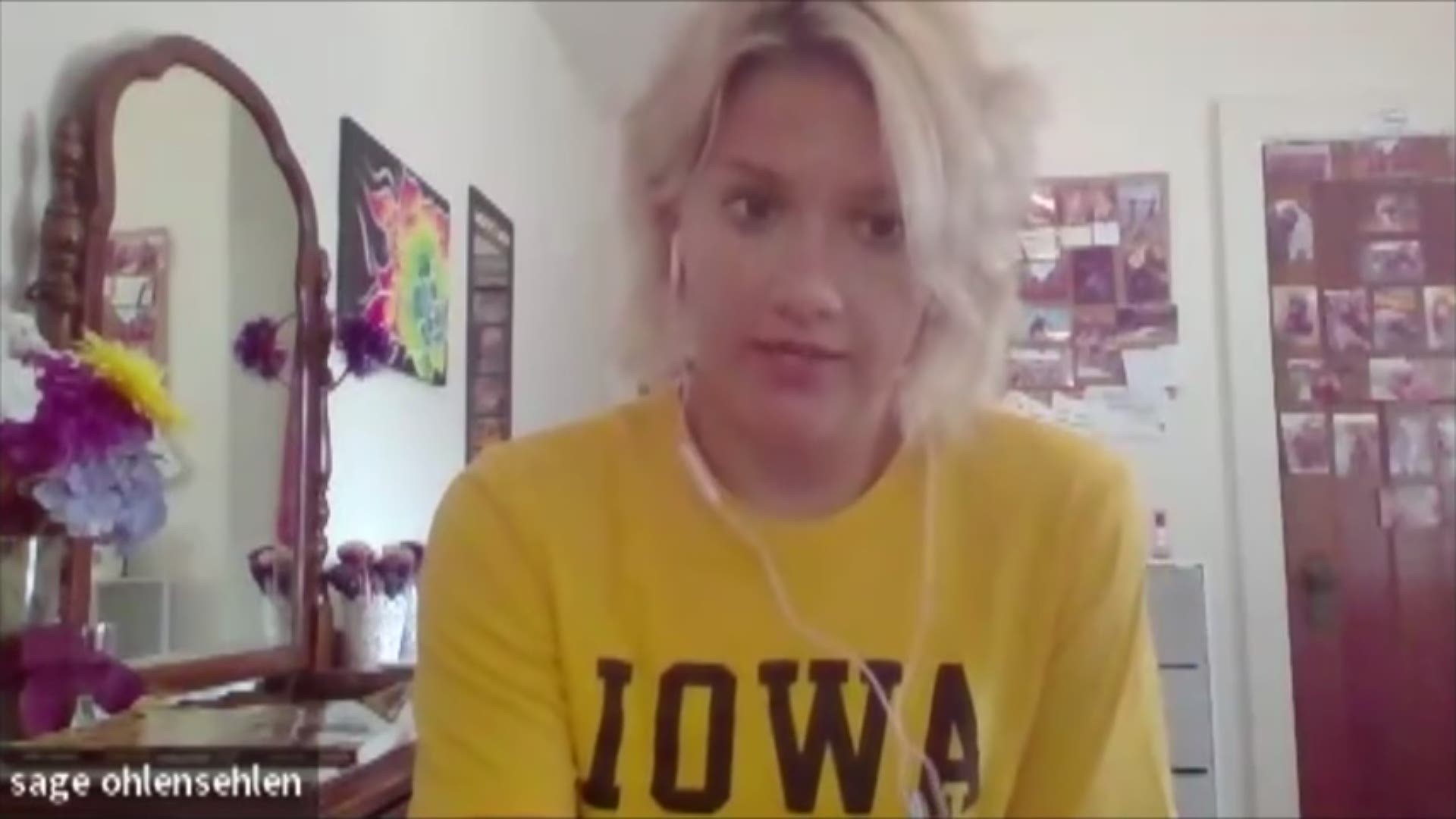 IOWA CITY, Iowa — With the effects of the coronavirus pandemic forcing huge budget cuts across the board, last week, the University of Iowa announced its decision to cut four of their sports programs after the 2020-21 school year.

Among those are both of the swimming and diving programs.

The decision came just a week after the Big Ten decided to cancel all fall sports for the 2020 season, with the hopes of playing in the spring.

Sage Ohlensehlen is going into her senior season as a breaststroke swimmer at Iowa.  She says due to the way this pandemic is going and all the uncertainty that comes with it, the program's history may already be done.

"With how fall sports went, football being canceled, there's a huge possibility we actually don't get our last season," Ohlensehlen said.

"That would be awful - to tell us 'you've got one last season,' and then there's a possibility it might be stripped from us because of COVID."

While this would mean she wouldn't have the traditional senior season, Ohlensehlen says her own career is the least of her worries.  What she cares about most at this point: everyone else.

On top of swimming and studying at Iowa, Ohlensehlen also a coach at the Iowa Flyers Club, or IFLY, working with kids.  She says the worst part about this is seeing their potential futures go away too.

"A lot of those kids have talked to me and said 'my goal for swimming is to swim for Iowa.' So to see those 6, 7, 8, 9-year-olds, seeing their dreams taken away from them? That is the worst part of this; there's no future."

The University of Iowa Swimming and Diving program is among the oldest in the nation, with men's swimming first being sanctioned as a sport in 1917.  The program is also credited with creating the precursor to the modern butterfly stroke.

"To take this program, you're removing 103 years of history.  You're not just taking out the 70 of us that are swimming right now.  You're taking out a huge chunk of history of the University of Iowa, and the state of Iowa in general."

A statement from Iowa Athletic Director Gary Barta, along with University President Bruce Harreld, says the University's budget has been hit so hard by the pandemic that the school will no longer have the funds to support 24 intercollegiate sports programs.

Barta also said all members of those teams will have their scholarships honored through graduation, should they choose to stay at Iowa.  Coaches' contracts will also be honored.

According to Ohlensehlen, though, many of her teammates who aren't seniors have said they will redshirt the year to train, and transfer schools to finish out their eligibility.

If they do choose to transfer, Barta says the Athletic Department will assist with the process in any way they can.

"Any boy that grows up in Iowa that's a phenomenal swimmer will have to take his talents elsewhere, and to me there's no excuse for that," Ohlensehlen said.  "There's no reason someone shouldn't be able to continue their sport in the state they grew up in."

Harreld and Barta's statement said the cancellation of fall sports, especially, football, eliminated so much of their regular revenue that the University no longer had a choice.

Ohlensehlen said Barta and the athletic staff told those affected that they did everything they could in trying to preserve the programs.  Ohlensehlen disagrees.

"I don't believe that.  As athletes, we're trained to know that there's no such thing as limits; that limits are things that you put in your own head, they're not real, they don't exist," Ohlensehlen said.

"There's always something more you can do."