The SEC chancellors and presidents voted Thursday to approve Texas and Oklahoma into the SEC. The schools will join the conference on July 1, 2025. 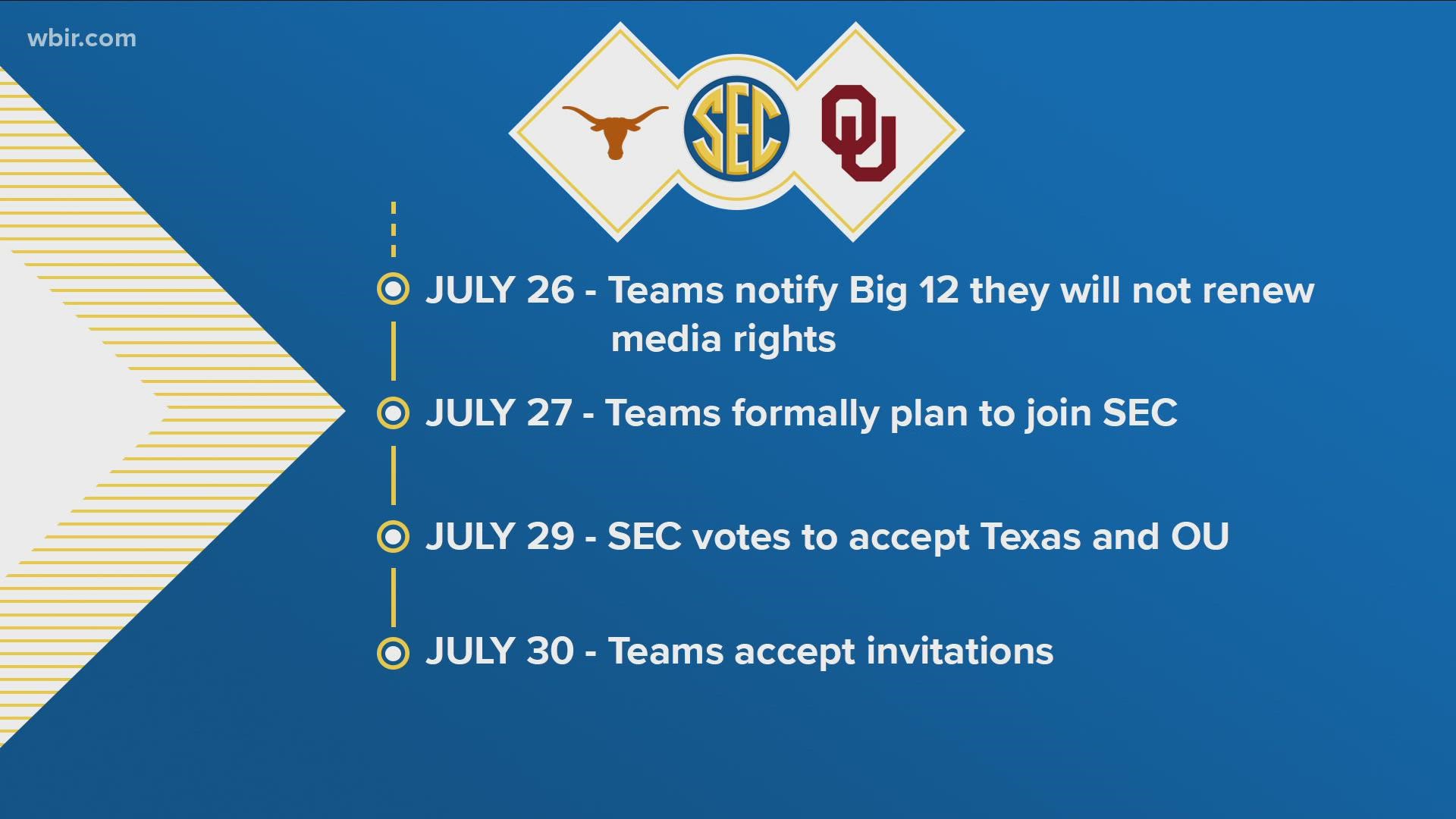 BIRMINGHAM, Ala. — The University of Texas and the University of Oklahoma needed a three-fourths majority vote from Southeastern Conference chancellors and presidents to be approved into the conference. They got it and then some.

On Thursday, the league announced they unanimously approved Texas and Oklahoma's request to join the conference.

Both universities' Boards of Regents officially accepted the invitations during meetings on Friday. The University of Oklahoma and the University of Texas will become members effective July 1, 2025, bringing the number of SEC members to 16.

"This is an important moment for the long-term future of the Southeastern Conference and our member universities," said SEC Commissioner Greg Sankey. "Oklahoma and Texas are outstanding academic institutions with two strong athletics programs, which will add to the SEC's national prominence. Their additions will further enhance the already rich academic, athletic and cultural legacies that have been cultivated throughout the years by our existing 14 members. We look forward to the Sooners and Longhorns competing in our Conference starting in the 2025-26 academic year."

Both schools informed the Big 12 on Monday that they would not renew their media rights with the league after expiration in 2025.

SEC commissioner Greg Sankey announced Tuesday that the schools had put in their official request for invitations to become members of the conference in 2025.

"While the SEC has not proactively sought new members, two esteemed academic institutions with storied athletics programs, today submitted formal request for invitations to become members of the Southeastern Conference in 2025." Sankey said in a statement from the conference.

The SEC last expanded in 2012 when Texas A&M and Missouri left the Big 12 conference to join the SEC. It resulted in big schedule changes and the loss of some rivalry games across the conference.

Right now, the conference is evenly divided into two divisions, east and west. In football, each team plays all the teams in their divisions every season along with a permanent opponent and a rotating opponent from the other division.

Alabama, Auburn, Florida, Georgia, Kentucky, LSU, Mississippi, Mississippi State, Tennessee and Vanderbilt have been members since the formation of the SEC in 1933.

"I am pleased to welcome the Universities of Oklahoma and Texas to the Southeastern Conference," said University of Tennessee Chancellor Donde Plowman. "The SEC is special – with fierce competition at the highest levels of college athletics, and a team spirit when it comes to collaborating in support of our students and student-athletes."

Danny White, the Director of Athletics for the University of Tennessee, also alluded to new rivalries in the years to come, expanding the league's footprint.

“From a proud charter member of the Southeastern Conference, and the city in which the league was founded, the University of Tennessee welcomes Oklahoma and Texas to the most powerful and competitive conference in intercollegiate athletics," he said.

NEWS | The @SEC Presidents & Chancellors voted unanimously Thursday to extend membership invitations to the University of Oklahoma and the University of Texas to join the SEC effective July 1, 2025, with competition to begin in all sports for the 2025-26 academic year.