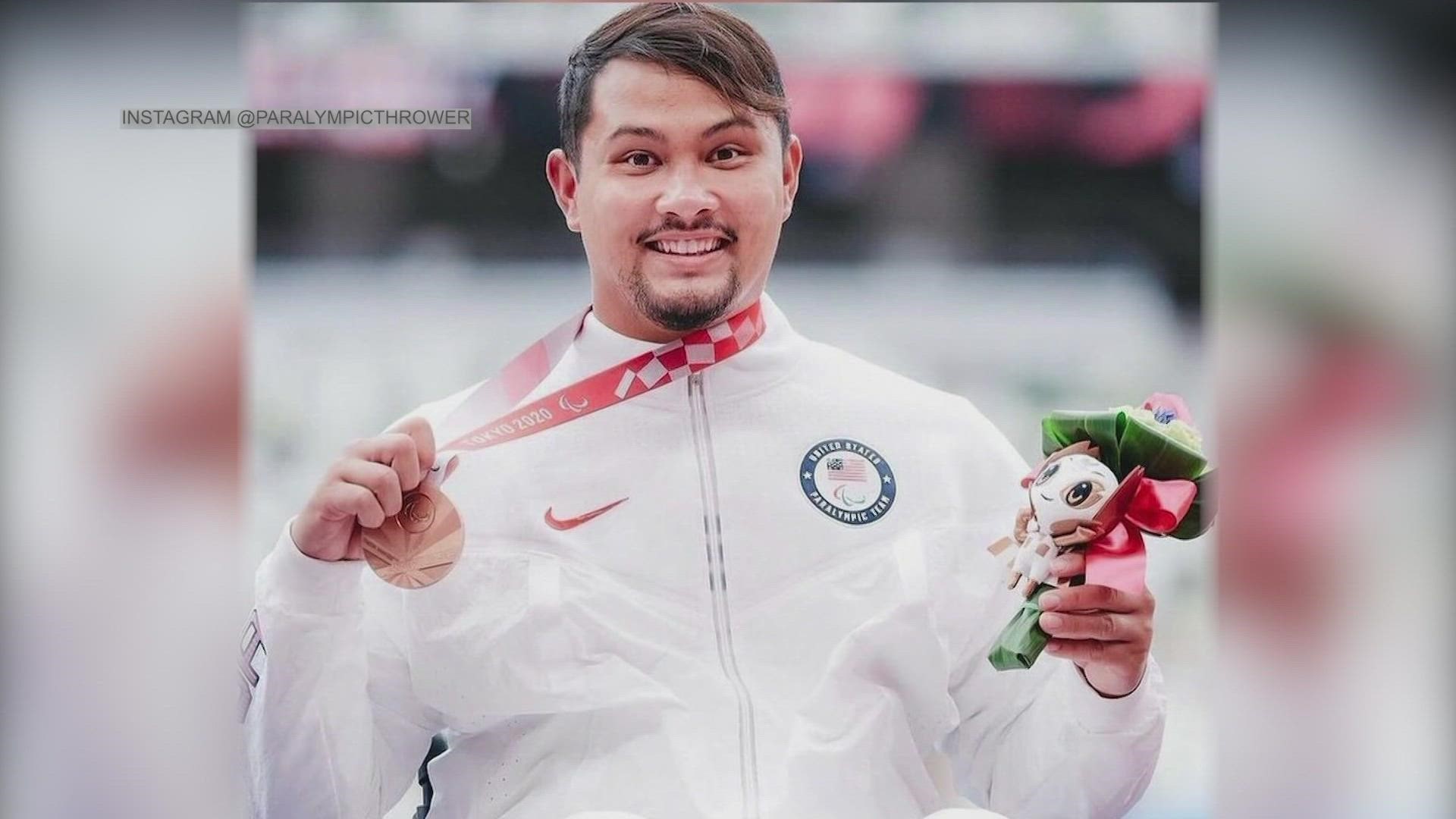 In this particular event known as the seated javelin throw in the "F54" classification, athletes are strapped in a chair that is strapped to the ground. A pole sits in the middle of the chair that the athlete holds to gain speed and leverage to throw the javelin.

"When you hold the javelin, it’s like a six-foot-long spear. And when the spear is just directly parallel with your eye, and you can only see the tip of it, you ... when this thing's in your hand, you're dangerous," Phongsavanh told Local 5's Eva Andersen. "Everything out there is basically prey at this point. So when you throw it, and it throws like a dime in the air, when you throw a perfect javelin you cannot see the javelin flying."

Phongsavanh isn't just a bronze medalist, he's also a world record-breaker. He qualified for the Paralympics back in June where he set a world record of 33.29', beating his personal best by two meters.

The games, like many other events in 2020, were pushed to 2021 due to the COVID-19 pandemic. Phongsavanh said the Tokyo administration did "a great job" in making sure athletes were kept safe.

"And competing in this massive venue that was built just for us athletes for track and field was incredible," Phongsavanh said. "It was absolutely breathtaking, and it was just a once-in-a-lifetime feeling that you just get when you come out of the tunnel and you’re about to compete on the world’s biggest stage for Paralympics."

I feel honored to have interviewed @TeamUSA Paralympic athlete @JPhongsavanh, of Des Moines, this afternoon. He medaled 🥉at the @NBCOlympics in the seated javelin throw earlier this month. "Now, sky’s the limit," he said. Watch the interview on @weareiowa5news at 10! pic.twitter.com/gP1mYjZ7YS

The humble athlete also praised the other competitors.

"They all hit personal best by a meter or more, of all time. And so when I went out there, I performed well, I just didn’t perform to the highest degree for gold," Phongsavanh said. "But we still walked away with a medal. It was fantastic. I love high-stakes competition with that much pressure. It really makes the sport that much better."

A shooting at an Ankeny McDonald's parking lot left the then-18-year-old paralyzed from the waist down in October 2015. That's when he decided to make a change in his life.

"I had no aspiration to go to college. I did not want to do any of that. And now I’m here, I’m a Paralympian, I have my undergraduate degree from DeVry University in accounting," Phongsavanh said. "I’m actually pursuing my MBA right now, I’m a couple classes short of that. Now, sky’s the limit."

So, what advice does the Paralympian have to offer others?

"Whether you go through a traumatic experience, whether there’s a small bump in the road, or anything that is uncomfortable in life—life has to go on," he said. "Tomorrow’s not guaranteed, and today’s a blessing."