Kazi Mannan is known in Washington, D.C. for his mission to feed the homeless, free of charge. But the pandemic almost ended his restaurant for good. 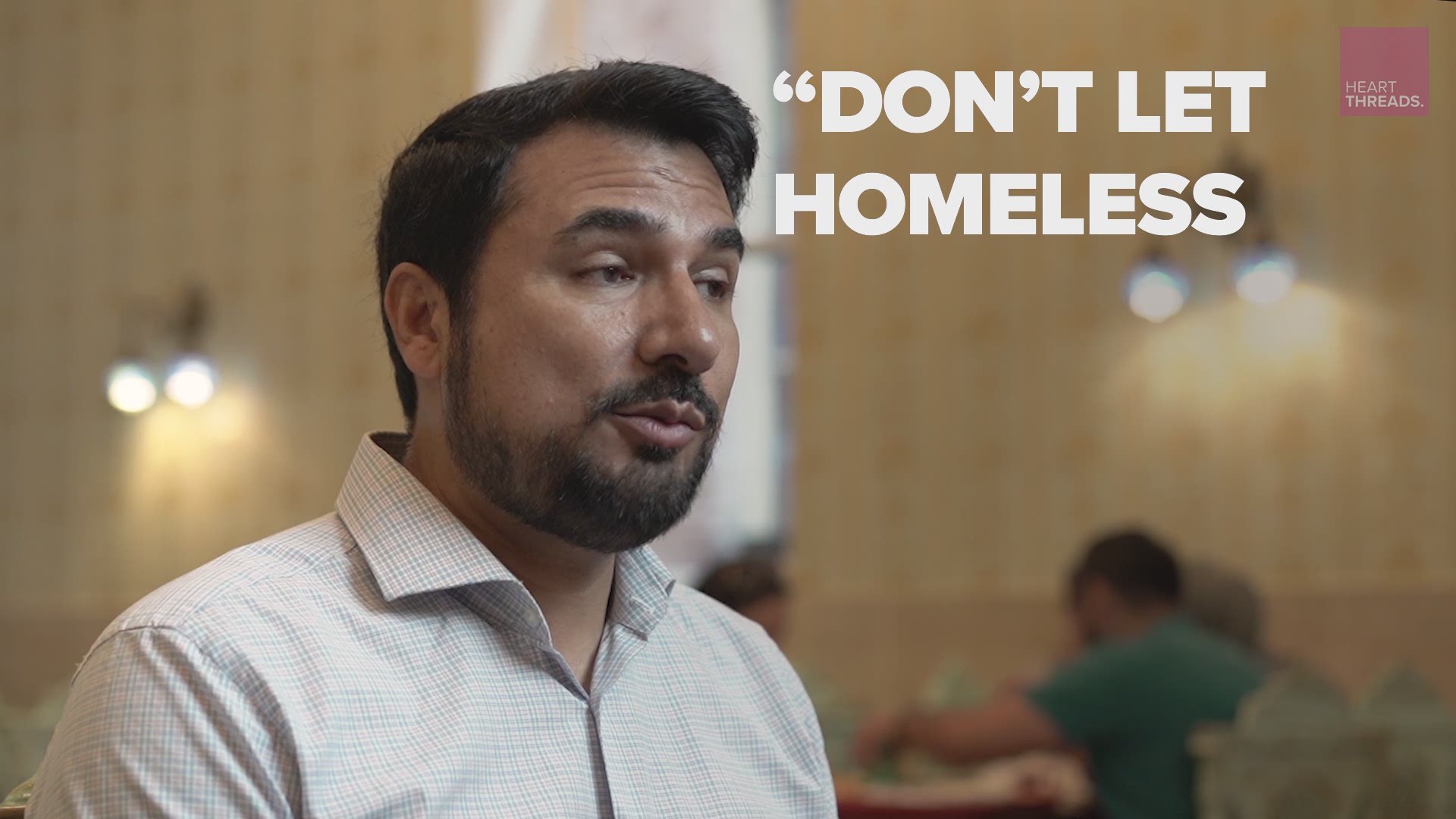 WASHINGTON — Editor's note: The video above is from HeartThreads' original story about Kazi Mannan in 2018.

Kazi Mannan owns Sakina Halal Grill, located just blocks away from the White House. But he is more than just the restaurant’s owner. Before the pandemic hit, he helped his team by taking orders, serving food, cooking in the kitchen and greeting customers.

Some of those customers weren't the type of clientele typical in the Downtown D.C. neighborhood. Business men and women would sit side by side with men and women experiencing homelessness.

This is how it is for every meal at the Sakina Halal Grill. That’s because Kazi made a promise: anyone who needs a meal, even if they can’t pay for it, is welcome.

“I prayed to God that if I ever have a restaurant, I will announce on the first day that I will bring in the homeless people,” said Kazi. “You can come in hundreds, I will never say no… you’re welcome to eat free with respect and dignity. We will treat you the same.”

But the days of breaking bread with strangers and welcoming groups of diners into Sakina Grill are a distant memory. Like many restaurants, the coronavirus pandemic has hit Sakina Grill, and Kazi, hard.

The generous restaurateur who was always helping others needed help himself to keep his business afloat.

A GoFundMe page created on November 11 on behalf of the restaurant says, "We are underwater and looking to survive this season so the doors do not close on Sakina Halal Grill."

It didn't take long for Kazi's supporters to flood the fundraiser with donations. Three weeks after the page was created, donors have raised an impressive $328,571.

On November 16th, Kazi posted a message of thanks to his supporters.

"Dear family and friends, Thank you for getting us out of water. We appreciate every share, donation, and prayer. God bless you, washington dc, and our mission," he wrote.

Part of the reason Kazi's mission is so important to him is because he knows what it’s like to be in need.

He was one of 11 siblings raised in Kuri, a small village in Pakistan. Growing up, he didn’t have electricity, running water or even a building for school. Classes were held underneath a tree, and if it rained, they were cancelled. But for Kazi, extreme poverty was the norm, and he recalled feeling blessed.

“My mother, I really greatly appreciate how she taught us in our upbringing to thank God, that was the attitude,” said Kazi.

When cooking dinner, Kazi’s mother, Sakina, would send her children to deliver some food to their neighbors, even though their supply was extremely limited.

“That was her way of worshipping God,” said Kazi.

So, when Kazi landed in the United States, he carried with him just $3 and his mother’s teachings.

He left Pakistan in hopes of being able to support his family. In just three days after his arrival at Dulles International Airport, he was employed at a gas station.

He worked 16-hour days, seven days a week. Every dollar he made he sent home.

Then, fate stepped in in the form of a limousine driver. The driver was also from Pakistan, and the two struck up a conversation. The driver took Kazi under his wing and helped him enroll in a licensing program. Soon, he was making $500 a day. It was finally enough money to support his family and himself.

After years of hard work, Kazi felt comfortable enough to start looking for other opportunities.

“I used to cook at home and my friends were like, ‘Why don’t you open a restaurant because you cook so good?’” Kazi recalled.

The idea quickly became Kazi’s dream. Opening a restaurant would be his way to give back, just like his mother did.

Kazi got his chance when a friend decided to sell his restaurant. Kazi jumped at the opportunity and immediately offered a down payment. He took over and changed the name to Sakina Halal Grill, a credit to his mother.

In addition to the name change, Kazi upheld his mother’s teachings in two other ways. First, he hired is brother as a chef, and they used her recipes in the kitchen. Second, he welcomed those in need.

“Many friends said, ‘Don’t let homeless people come inside your restaurant. They will ruin your business,’” recalled Kazi. “It’s inside of my heart that I have food and other person who can’t afford it doesn’t. If I fail, I fail! I don’t care. It’s humanity.”

RELATED: Seven women, six days and a healing trek in the footsteps of Harriet Tubman

On the opening day in 2013, Kazi walked to a nearby park and invited dozens of homeless individuals to his restaurant.

In just five years, those first dozen customers turned into thousands. Kazi estimates he feeds 16,000 people in need each year.

For anyone who questions why he would give away so much, Kazi has a message: Let’s stay human.

“No matter what power you have, what job you have. If you just think about other humans… lay on your back and think about how God wanted us to love each other.”

“If you want to worship God, you have to show kindness to his creation,” said Kazi. “He created us to treat each other with kindness and love… worship is not just you isolate yourself in the temple, mosque, church where you just sit and do worship. Worship is a lot of action that you do in your life.”