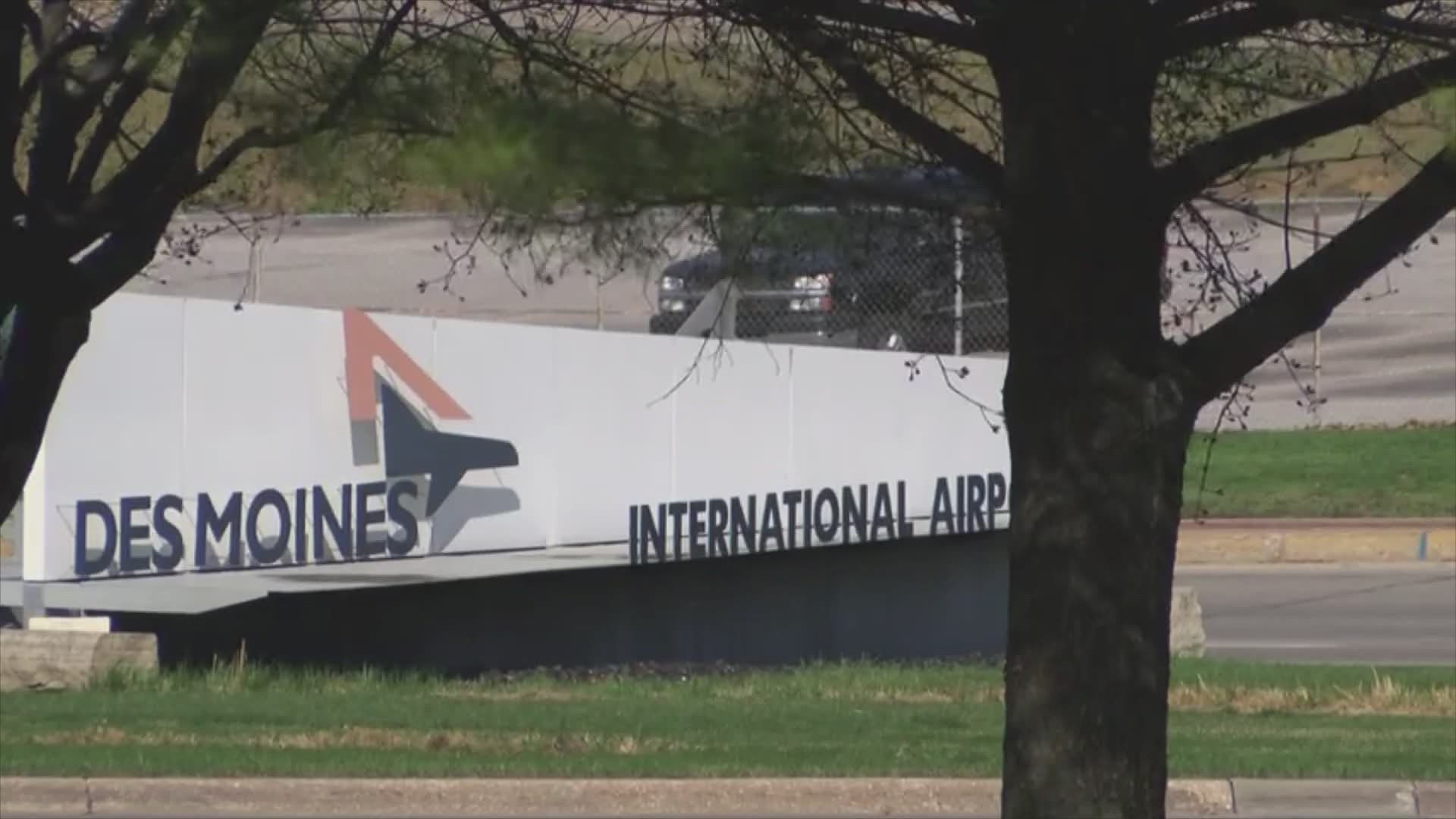 DES MOINES, Iowa — Airlines across the nation are taking a massive hit from the spread of coronavirus, with some planes flying in and out of airports almost completely empty.

With fewer people taking to the skies and more flights getting cancelled, the Des Moines International Airport is struggling with passenger traffic.

Airport Executive Director Kevin Foley says U.S. air travel has dropped by 95% of passenger traffic compared to this same time in 2019. Some flights are still taking off and landing in Des Moines, but many flights have fewer than five passengers aboard.

"The biggest impact, aside from just getting to be eerie ... seeing no cars in the parking lots, very few passengers, reduced staffing for employees ... it's the financial impact that the airport is taking," Foley said in an interview with Local 5.

For example, Foley says the airport's short-term and long-term parking lots typically account for about 30% of the incoming funds. Even though the airport has a total of 4,950 available parking spaces on their property, only a few hundred are currently being used.

Additionally, airlines pay certain fees to maintain their presence at the airport. As more flights are canceled and routes are reduced, this funding also slows down.

Foley says the lack of incoming revenue has forced them to delay or halt certain construction projects and capital improvement plans.

Not all of the projects will be stalled, though. Certain updates, including a major upgrade to one of the airport's runways, will continue forward since most of the funding has already been secured, either through outside grant allocation or other revenue sources.

Some projects, as Foley mentioned, will remain scheduled because the decrease in passenger traffic will alleviate construction efforts.

Foley says the construction of Runway 523 is still planned. 90% of the funding for this project was provided to the airport with an FAA grant. This means the Des Moines Airport Authority will be responsible for covering 10% of the roughly $12.4 million contract.

Additionally, many routes have been cancelled for the foreseeable future, including some of the recently-announced Allegiant Airlines flights to Memphis, Austin, and Chicago-Midway.

Specifically, Foley says the direct routes to Memphis and Chicago-Midway have been suspended, likely until early 2021.

The airport says they have been in touch with Allegiant Airlines, and although no officials dates have been finalized, Allegiant plans to make Des Moines a "crew base" will also be delayed.

Foley says some of the construction for Allegiant's presence has already begun, and they intend to move forward with this soon.

Other routes, including Delta's usual nonstop service from Des Moines to New York-LaGuardia, have been reduced at this time.

Foley says these changes will present new challenges when air travel resumes, since the airport will have to meet with airlines about the status of routes in and out of Des Moines.

However, he adds this could wind up being a positive step, since it gives airport officials a chance to petition for new seasonal or permanent routes in and out of Des Moines.

Even with all of the financial struggles, Foley says his priority is to promote the safety and well-being of airport employees and passengers.

"Our primary concern is both our employees, and number two, our passengers- the safety and well being of those entities," Foley said. "We have our staff still on payroll and we intend to keep them that way for as long as we possibly can."

Hand sanitizer, wipes, and gloves are available throughout the terminals and at check-in counters.

Masks, although not mandated just yet, are available for distribution to airport employees, too.

Employees at the airport and in the control tower are rotating on weekly shifts to limit any possible exposure to the virus.

Foley says there are contingency plans in place to make sure flights remain operational, even if someone falls ill or presents COVID-19 symptoms.

Travelers should know that at least a few flights will continue to depart and arrive in Des Moines during the pandemic. Foley believes the only reason flights would stop is if President Trump issued a stop or temporary ban on domestic travel.

As the entire world continues to deal with the effects of the coronavirus pandemic, Foley says he expects this period in American history will likely re-shape the nation's airline industry moving forward.

RELATED: REAL ID deadline pushed back a year due to COVID-19

RELATED: DSM Airport Authority Board takes ‘no action’ on proposed hotel and casino