Iowa roads deadlier than anticipated in 2020, state hopes to change that in 2021

Iowa has started a new task force, involving law enforcement from the state to local levels, in order to cut down on 2021's vehicular fatalities. 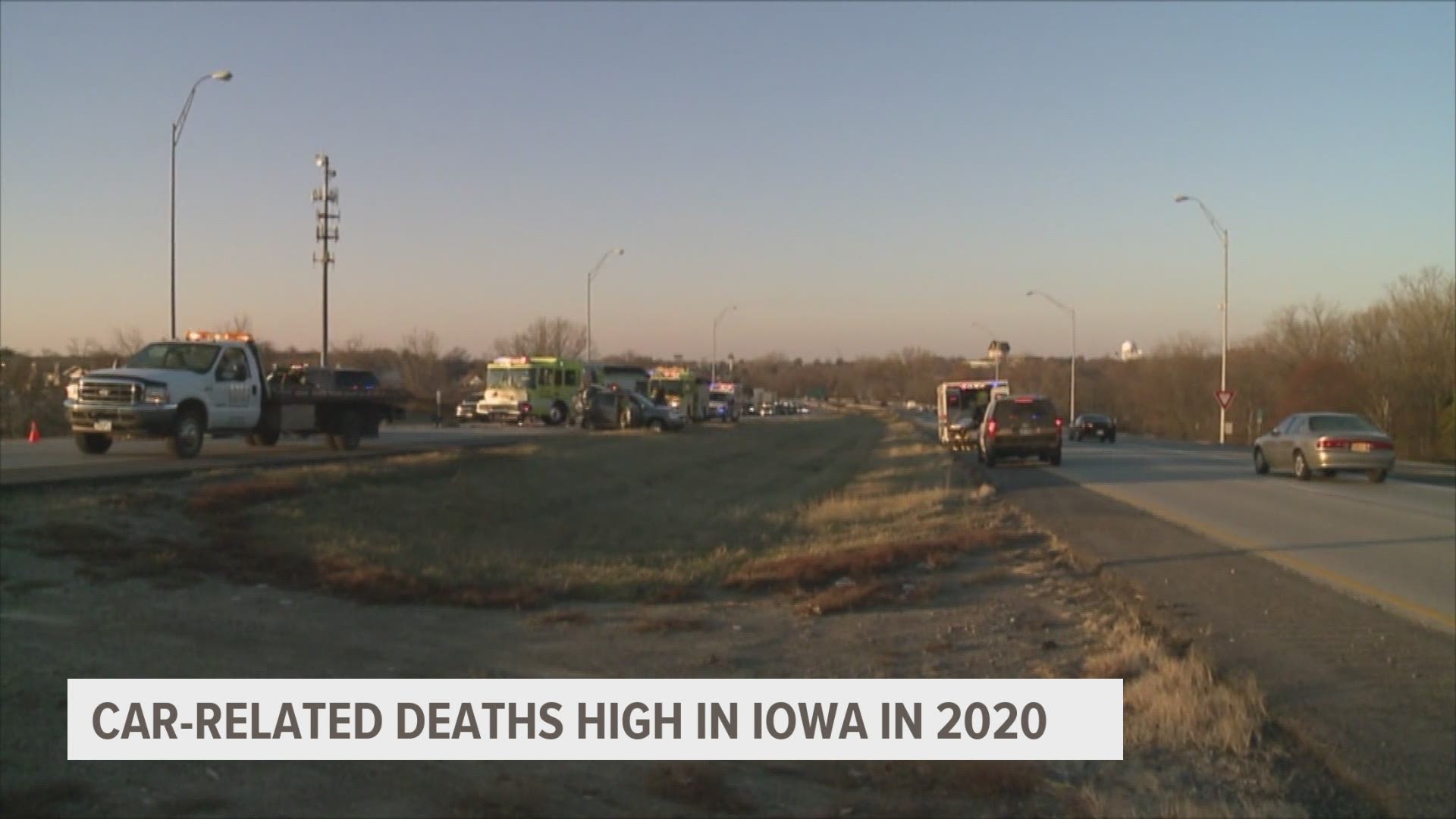 DAVENPORT, Iowa — For all that the pandemic changed in 2020, one thing, tragically, stayed the same. Iowa's numbers for car crash-related deaths remained high - dashing early hopes for a pattern-breaking year.

Sergeant Alex Dinkla is the Public Information Officer for the Iowa State Patrol. He says the state saw 337 total fatalities related to vehicular crashes in 2020. That number is the same from 2019's deaths.

"Every year, we as a state patrol, one of our main missions is for traffic safety and the motoring public. And every year, we have a drive to try to help reduce and lower the number of fatal crashes that happen in Iowa," said Sgt. Dinkla. "That's still gonna be a goal for us as we move forward into 2021."

The state had high hopes for record-low deaths this year, after a quiet first half to 2020. In the first six months of the year, Iowa only saw 115 fatalities. Officers saw a 40-50% reduction in vehicles traveling, and they anticipated those low deaths to continue throughout the rest of the year.

RELATED: Here's how the QC Airport fared during the coronavirus pandemic of 2020

But a sharp rise in crashes throughout the fall and winter dashed all of those hopes, and led to the year's other 222 deaths.

In 2020, Scott County was the second deadliest in the state. 16 fatal crashes were recorded, resulting in 19 deaths. Most of those occurred in Davenport, where 13 crashes killed 16 people.

Sgt. Dinkla says part of that is due to what he calls erratic behavior on the roads, including an increase of excessive speeding. The Iowa State Patrol recorded a 108% increase in citations for people traveling 100mph or more in 2020, and issued almost 1,500 tickets just for individuals traveling over 100mph.

In Monopoly, you risk getting the card that says, “Go directly to jail. Do not pass GO & do not collect $200”.

Top speed was 114mph for this driver caught drag racing on I-380 (Johnson County). The driver was brought directly to jail.

Troopers estimate that the drop in motorists on the roads led to fewer obstacles for speeders to work around. Now that travel has picked back up in Iowa, and other cars are back on the roads, the state says the speeds haven't decreased... and neither have the deaths.

"Ultimately we would love to have zero fatalities. It affects every single one of us first responders that goes out to these crash scenes because we know that these are somebody's family member, somebody's friend, somebody's loved one," said Sgt. Dinkla.

Now, Iowa has put together a task force, involving all levels of law enforcement from the state down to local departments.

"Our hope is that by everybody partnering together, that we can come out here and combat some of these fatalities and try to reduce some of these preventable crashes from happening," said Sgt. Dinkla.

Together, the task force will be putting out targeted messaging, and examining specific counties to increase patrols in. And as Sgt. Dinkla explained, they'll be looking for key dates to ramp up enforcement throughout the state.

"We're gonna try to pick out a few dates that probably haven't been targeted before. People are expecting increased enforcement around holidays and high travel times, but we're gonna pick out some other dates, such as the deadliest day in Iowa - where we see most of the crashes - and we're gonna be looking at some real targeted data."

This task force includes partnerships with the governor's office, the Iowa State Patrol, the Sheriff and Deputy Association, and the Iowa Police Chief Association.

But the troopers say the real key to saving more lives in Iowa, is when the public slows down and pays attention.

"If we just have people that start looking at how they're traveling and drive more defensively and drive safely," said Sgt. Dinkla, "Then we can come out of this with a lower fatality rate."