12.6" of snow fell at the Des Moines International Airport through 6 a.m. Tuesday, with more metro communities reporting at least a foot. 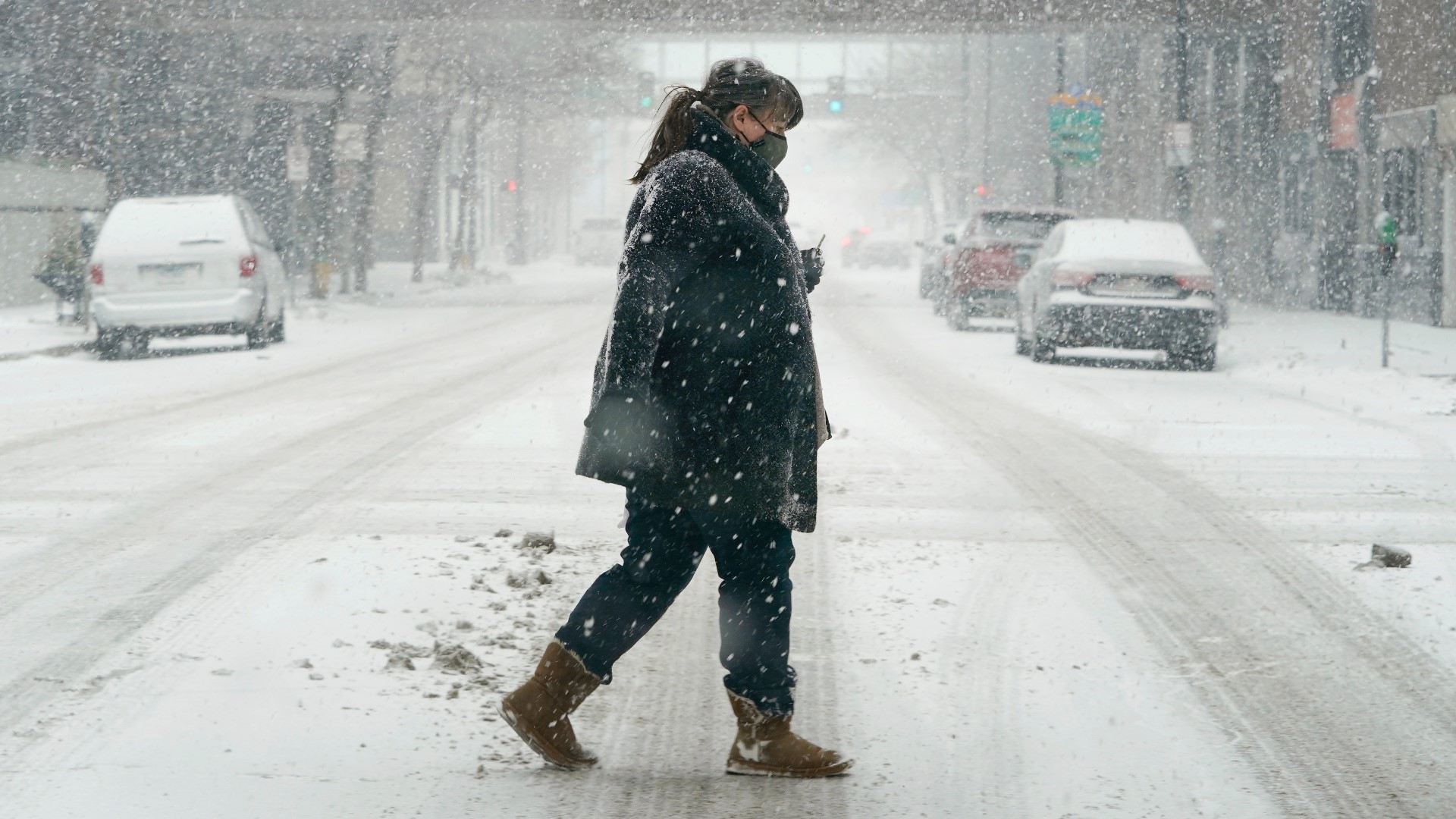 IOWA, USA — It's official: this winter storm is by far the biggest of the season for central Iowa, with parts of the Des Moines metro reporting over a foot of snow accumulation before the snow even finished falling.

In Clive, more than a foot was drooped, but resident Lou Rand said he didn't mind it.

At the Des Moines International Airport, crews cleared runways for planes to take off and land.

"The biggest challenge of maintaining the airfield is really the coordination between the event, the aircraft and traffic control," Des Moines International Airport Director of Operations Clinton Torp said.

"It really is a coordinated effort."

Each snowplow the airport uses costs $900,000, and they now use a GPS-tracking vehicle to follow along with where operations vehicles are.

Between 5:30 p.m. Monday and 1:30 p.m., the Des Moines Police Department officers responded to:

122 citations for primary snow routes have been issued as of Tuesday midday, according to the department.

An Iowa State Patrol trooper was struck from behind on I-80 near the north side of Des Moines, ISP tweeted.

"The trooper in the patrol car was transported to a local hospital (with minor/precautionary injuries)," the tweet reads.

Yesterday, 7 DOT plows were struck by vehicles. If you must travel in these conditions, it is imperative that you slow down & increase your following distance. Your lives, and ours, are put at risk every time vehicles are driving in these types of conditions. 2/2

Event total at the Des Moines International Airport was 12.9" of snow. That accounts for everything from start to finish.

Des Moines currently stands at 41.9" of snow for the winter so far.

The Iowa State Patrol released the following numbers from the winter storm (6 a.m. to midnight Monday):

The snow is finally coming to an end in Des Moines and Ames. Flurries will stick around eastern Iowa through the early afternoon.

Travel is still not advised in Des Moines and Ames.

As more snowfall reports come in from different parts of Iowa, it is becoming clear that the highest amounts occurred in western, southwestern, and central Iowa.

Areas to the southeast did not quite receive as much as expected, but still had over 7" of snow in most spots.

The hardest part of the forecast was determining the cutoff zone on the northern end of the storm.

This sharp cutoff actually pushed farther north than anticipated, bringing higher totals to communities along Highway 20, with the lowest amounts closer to Highway 18.

❄️Here's a snowfall map based on reports we've received so far this morning. We've got a wide swath of the state waking up to 6 to 12+ inches of snow!

📏How much snow did you receive? If the map looks wrong for your area, send us a report so we can update the map! #iawx pic.twitter.com/d4Xb0FdkEq

Roads are in terrible shape across the state, with "travel not advised" alerts issued for much of central Iowa.

Travel is highly discouraged, but commuters who must be on the roads should exercise extreme caution, increase following distance, and clear all snow from mirrors, windows, and even the tops of vehicles.

"Travel Not Advised" alerts are in effect for much of central and western Iowa this morning, per the @iowadot

Roads are going to be in bad shape for much of the day, especially as light snow continues to fall this morning. #iawx pic.twitter.com/x2aQTwGbKN 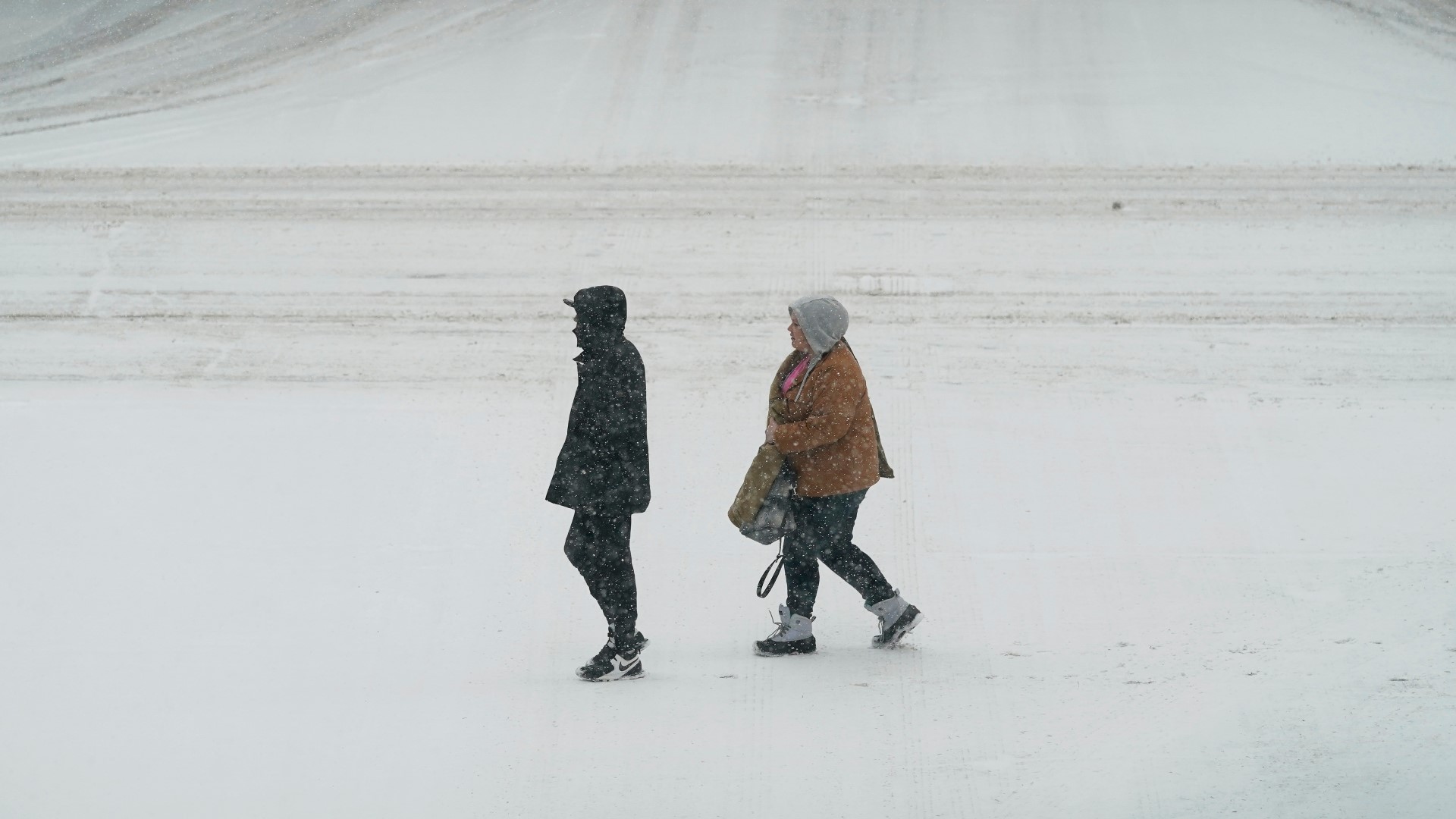 It has snowed in Des Moines 17 consecutive hours. More light snow showers are expected in central Iowa through mid to late morning. Up to 1" of additional snow is possible.

The Des Moines International Airport officially reported 10.3" of accumulation as of midnight.

Light snow is still currently falling, so this number may tick up just a bit more by sunrise.

A fresh update from the airport will come at 6:00 a.m. Tuesday.

That 39.3" is nearly 20 inches above average for this point in the season.

The highest report of the snow storm has come in at this point- a whopping 13.5" of snow was measured near Jordan Creek in West Des Moines.

Other parts of the west metro recorded 10-12" of new accumulation, even before the light snow finished falling.

Additional accumulation is possible through the night and early morning Tuesday, but the rate of snowfall will continue to decrease.

A serious crash caused big traffic delays along I-80 in Newton this evening. No injuries were reported, but a jack-knifed semi blocked part of the interstate and several cars slid off into a ditch.

Snow total reports are beginning to come in from across central Iowa, even as the snow continues to fall.

The highest amounts occurred right through central Iowa, including the metro. 12" of snow was reported near the Urban Loop, in between Grimes and Urbandale.

Generally 8-10" coming in for the metro area. Thanks to a bit of dry air on the east side of the state, southeastern sections of our region are getting less than expected.@weareiowa5news pic.twitter.com/TsHVE3J6pQ

Most of the metro has received at least 6-8" of snow so far, with more snow continuing to fall over the next several hours.

Visibility will remain poor throughout the night and we'll see dangerous road conditions through at least Tuesday morning.

Light snow will continue to fall overnight and Tuesday morning as well.

Highest metro total coming in so far: 7" reported in Ankeny. 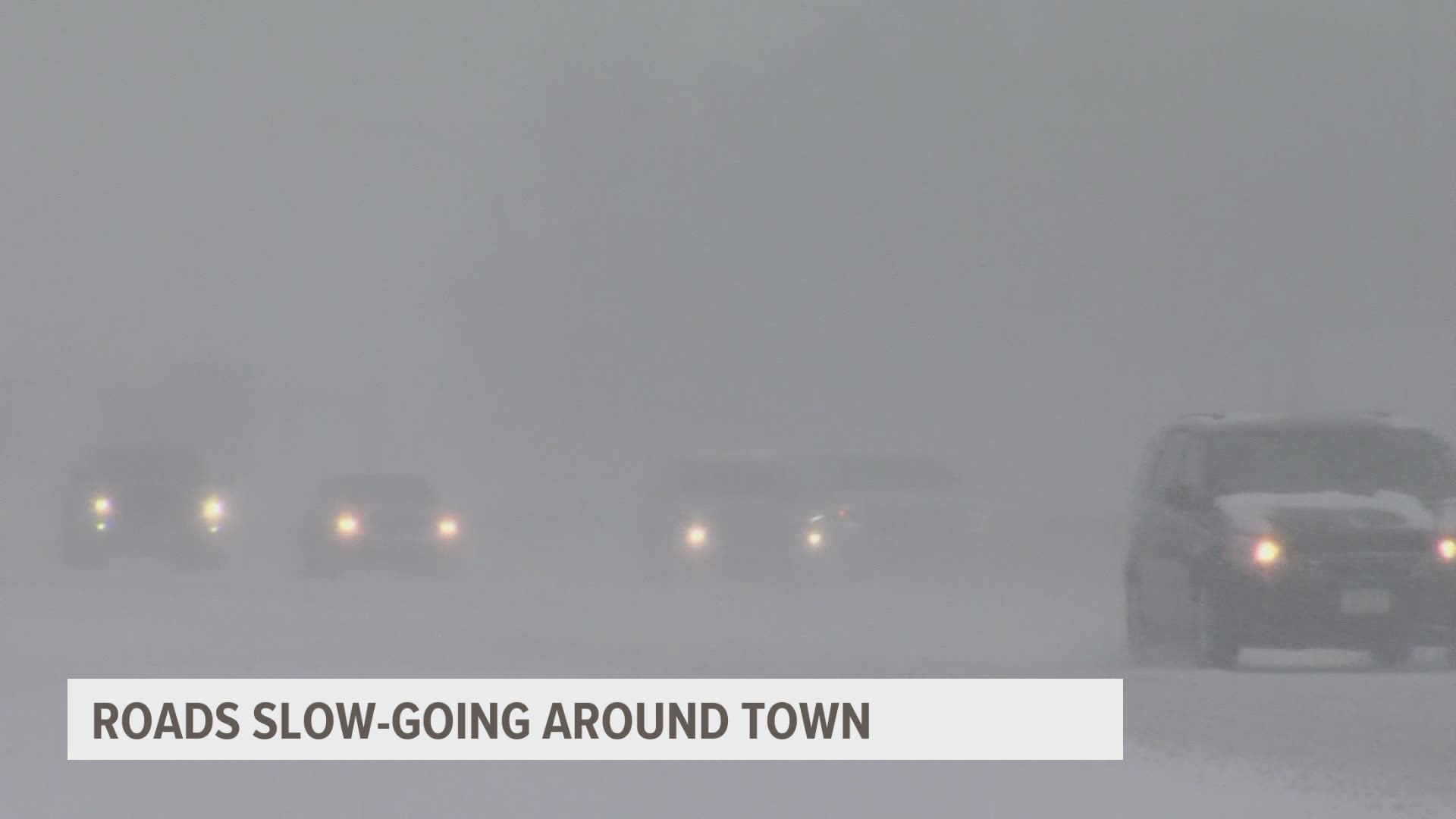 The Iowa State Patrol responded to 47 crashes, 46 property damage, one personal injury and 131 motorist assists between 6 a.m. and 6 p.m.

Many departing flights and arriving flights have been cancelled in and out of the Des Moines International Airport for the remainder of the evening.

Conditions are simply too severe for planes to take off or land in the area at this point.

Just a WALL of heavy snow right now across central and southern Iowa.

Snowfall rates of 1-2" per hour are expected to continue through this evening. @weareiowa5news #iawx pic.twitter.com/Gn6r5bTUy1

The Iowa Department of Transportation has upgraded much of western and southwestern Iowa to a "TRAVEL NOT ADVISED" alert.

If at all possible, drivers should completely avoid travel in this area because whiteout conditions have been reported. The roads are almost completely impossible to navigate.

ALERT: The @iowadot has upgraded much of southwestern Iowa to a "TRAVEL NOT ADVISED" alert.

This is where road conditions are difficult or altogether impossible to navigate. Stay off the roads in that area. @weareiowa5news pic.twitter.com/UmPr7bivFf

Check out these snowy scenes around central Iowa

Three Iowa Department of Transportation snowplows have been hit along I-80 Monday afternoon, according to Trooper Ryan DeVault.

"Please slow down and increase following distance while being alert for flashing orange, white and blue lights," DeVault wrote on Twitter.

Protect those trying to protect you!!!! In the last 2 hours there ha e been 3 Iowa Department of Transportation Snowplows struck in western Iowa along Interstate 80! Please slow down and increase following distance while being alert for flashing orange, white and blue lights! pic.twitter.com/xBKWTOzIV1

Up to 1.2" in West Des Moines. Measurements will be taken hourly through at least the evening hours.

Heavier pockets of snow are beginning to fill in for central and southern Iowa, with near whiteout conditions reported in southwestern Iowa.

Road conditions are rapidly deteriorating for much of the state along and south of I-80, with additional heavy snowfall likely through the evening.

Snow is coming down now in the metro area. Only 0.2” on the ground so far, but heavier bands of snow are moving in.

Five TestIowa sites will close early due to the winter storm, the governor's office has announced:

Those who had appointments previously scheduled after the close times today, or between 8 and 10 a.m. Tuesday will receive an email that indicates the site is closed and that they can bring their QR code to any of the five sites during open hours and get tested. You will not have to take the assessment again or schedule a new appointment time.

Through the afternoon, snowfall rate will continue to increase, occasionally reaching up to 2" per hour in southwest Iowa.

The Storm Prediction Center says central and southwestern Iowa, along with southeastern Nebraska will be the focal point for the highest rates of snow over the next several hours.

Ahead of the lunch hour, snow is continually spreading north and east, now falling in the southwest tier of the state.

Road conditions are quickly deteriorating in areas seeing the snow already, and the conditions will only continue to worsen throughout the afternoon.

Multiple metro school districts have made the decision to release students early out of an abundance of caution with this incoming storm.

Snow is underway in far southwestern Iowa, especially for areas like Red Oak, Clarinda, and Corning.

As the snow continues to develop and spread north throughout the day, expect reduced visibility to occur and rapidly deteriorating road conditions.

Parts of Nebraska have already received 3" of snow, and it's only just begun for our neighbors to the west.

The forecast for heavy snow and dangerous travel is still on track for the afternoon and evening.

Snow has started in southwest Iowa- and it's already covering the roads, too!

This view is from Highway 2 in far SW Iowa, just over the state line from Nebraska City.

Gusts could occasionally exceed 40 mph in southern Iowa today. This combined with heavy snow will lead to poor visibility.