Impact-based warnings are already issued for tornado and flash flood warnings, but severe thunderstorms will receive the designation later this year. 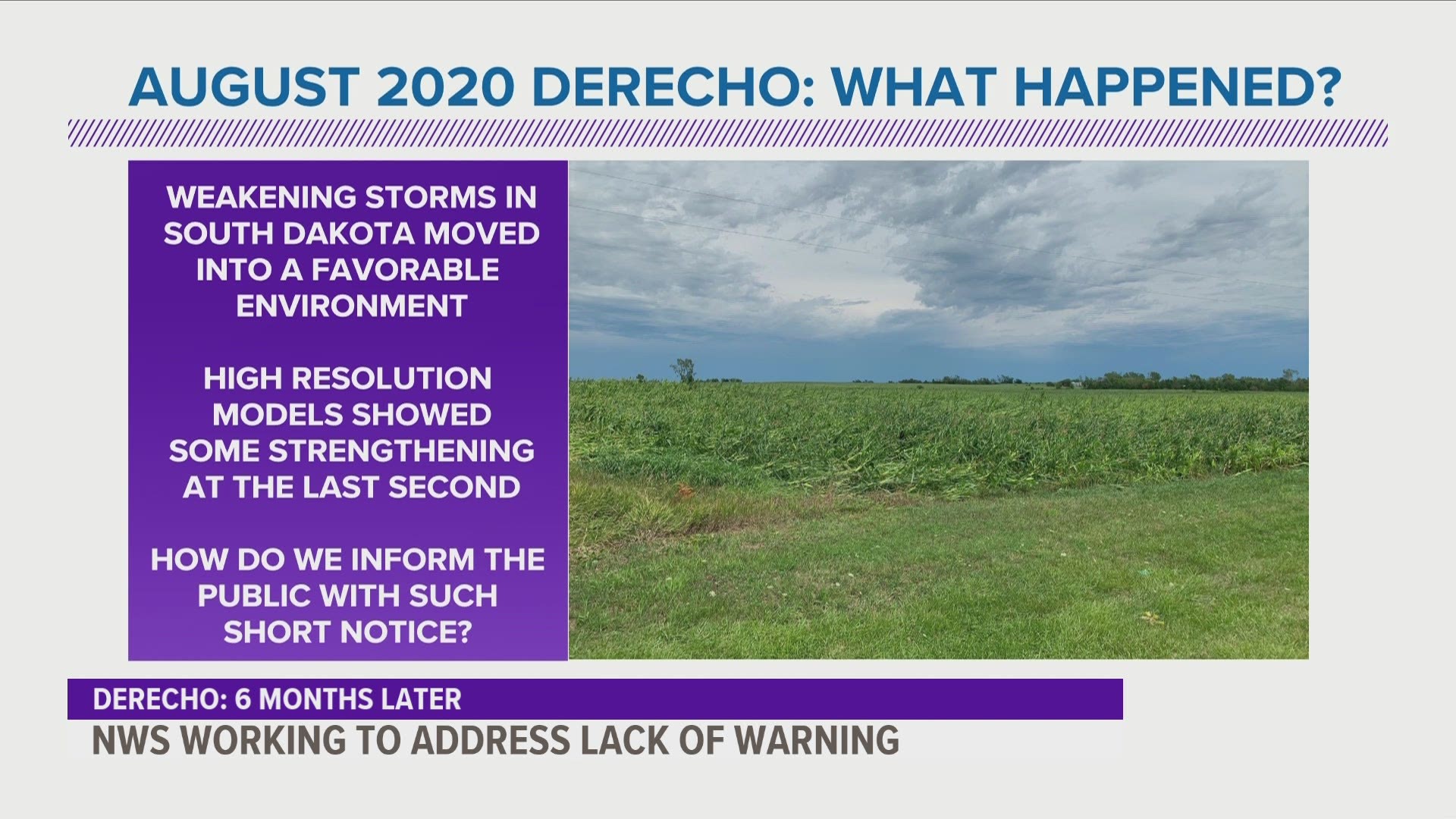 DES MOINES, Iowa — Changes are coming soon to how severe thunderstorm warnings are issued by National Weather Service offices across the nation.

Although the modifications have been in progress for a while, one of the biggest severe weather events in Iowa's recent memory helped ensure the changes take effect this year.

The storm in reference is Iowa's destructive derecho, which left a trail of damage and debris in its wake as it raced across the state on Aug. 10, 2020.

As the storm moved through different central and eastern Iowa communities, wind gusts reached over 100 mph.

While severe thunderstorm warnings were issued in advance of the derecho's path by the National Weather Service in Des Moines and the Quad Cities, many expressed concern for how the severity of the storm was conveyed leading up to its arrival.

Even in the days leading up to Aug. 10, a threat for severe weather was mentioned by Local 5 meteorologists, but admittedly the forecast did not indicate a storm of the derecho's magnitude could occur.

Simply put: predicting a historic derecho is particularly complex and is even an area where the most advanced weather technology and modeling experiences difficulty.

There is no doubt meteorologists will study the storm well into the future, as there are many lessons to learn from the forecast, the event itself and the aftermath.

RELATED: Derecho warnings: Why Iowans weren't alerted of the severity of the storm right away

For future storms, however, there will be some additional messaging offered with severe thunderstorm warnings in hopes that a storm's severity level will be made clearer to the public.

The National Weather Service says it will transition to impact-based warnings for severe thunderstorm warnings and special weather statements on or around April 28, 2021.

The goal of impact-based warnings is "to focus on providing more information to media and emergency managers, facilitating improved public response and decision making; and meeting societal needs in the most life-threatening weather events," the NWS said.

This means both severe thunderstorm warnings and special weather statements will have tags at the bottom of the warning indicating the expected hazards, threat level and whether the the storm's severity is observed or radar-indicated.

Impact-based warnings are currently issued for both tornado warnings and flash flood warnings.

To better communicate the threat of a flash flood, NWS will issue Flash Flood Warnings in our new impact-based warning format. In addition, Wireless Emergency Alerts for flash flooding will be reserved for only the most life-threatening events.https://t.co/AxqXb9jRHW pic.twitter.com/oenk147vez

By late spring and summer 2021, severe thunderstorm warnings will be issued with base, considerable, or destructive tags at the end.

RELATED: What makes a thunderstorm 'severe?'

For additional reference, it is expected the 2020 derecho would have received a destructive severe thunderstorm warning label, as winds were certainly greater than 80 mph throughout the storm's duration.

When these tags are included on severe thunderstorm warnings, meteorologists hope the exact severity of a storm will be conveyed to the general public in a more effective manner.

Also of note, there is a plan in place for 'destructive' severe thunderstorm warnings to eventually be added to the list of national wireless emergency alerts, which are already sent directly to smart phones for tornado warnings, flash flood warnings, hurricane-related warnings, snow squall warnings, Amber alerts and messages from the President of the United States.

In other words, those with smartphones would receive a wireless emergency alert (WEA) notification through their device when a severe thunderstorm warning with 'destructive' potential is issued for their current location.

National Weather Service meteorologists say there is no definitive timeline on when the activation of these wireless emergency alerts will begin, as the recent process for snow squall warnings took roughly one year to fully implement on a national scale.

RELATED: August derecho named among top 5 worst severe storms in the US since 1980

Severe weather season can begin as early as March in Iowa, often lasting until September or early October.

The peak timeframe for severe weather in the Midwest, however, is in the summer months of May, June, July and August.

As always, it is also a good idea to review your family's severe weather preparedness plan so everyone knows exactly what to do and where to seek shelter when storms strike.

We Are Iowa app or subscribe to Local 5's "5 Things to Know" to get the latest weather forecast!