WEATHER LAB | Why is the temperature in your house or car different from the official temperature outside?

The location of a thermometer typically determines the accuracy of a temperature measurement, as many factors may influence the recording process. 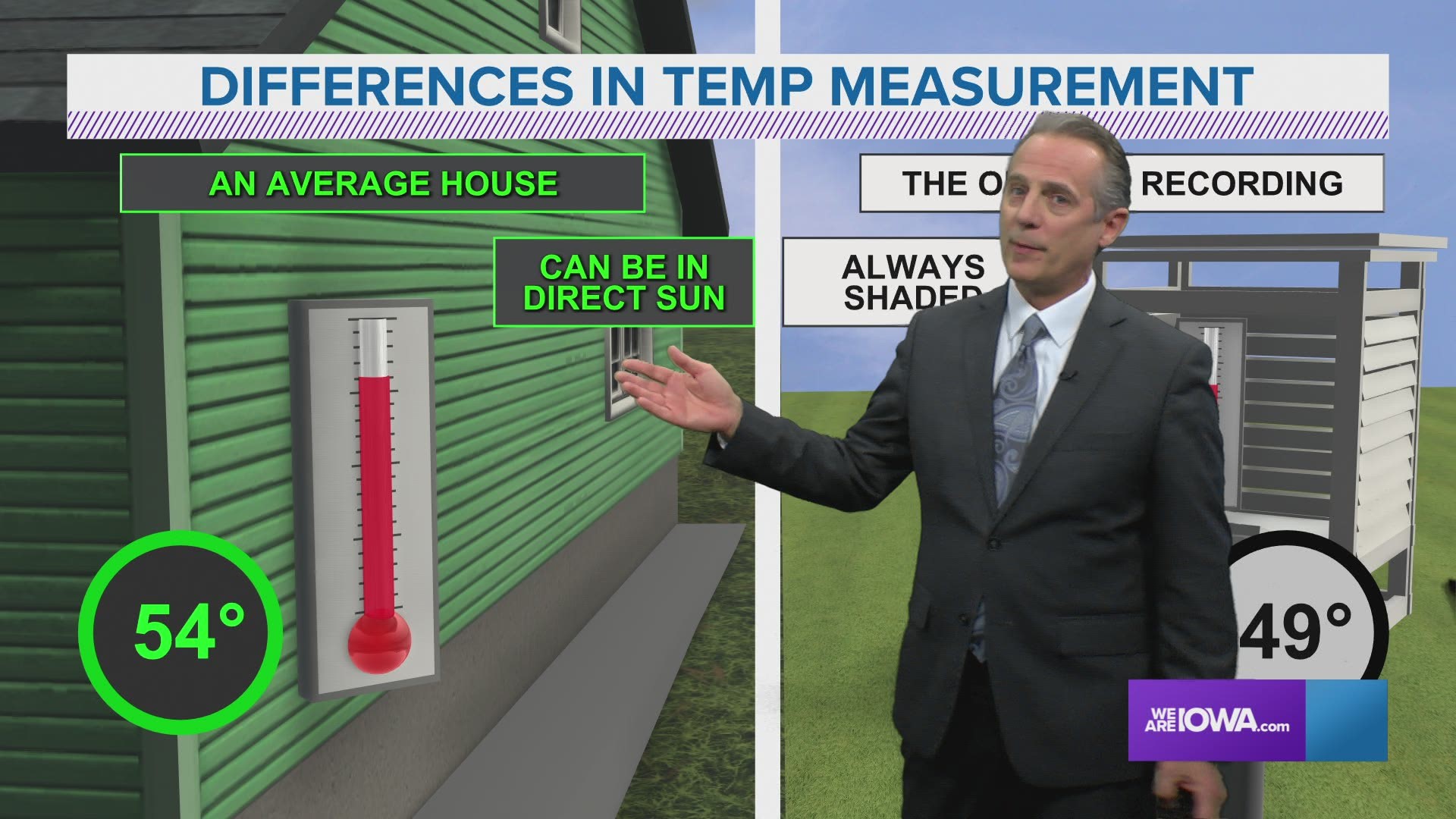 While it may seem fairly simple, identifying the current temperature in a particular location at any given point in time is actually quite complex.

For most places, ASOS and AWOS mechanisms are located at airports or military bases.

In Des Moines, the ASOS location for the city is housed at the Des Moines International Airport.

The National Weather Service considers the ASOS and AWOS temperature recordings as official observations for their particular city of origin.

Still, it seems just about everyone has access to a thermometer, either at their home, on their smart phone, or even on the marquee at the neighborhood bank or credit union.

Temperatures recorded on these devices are often different from the official ASOS or AWOS observations.

Consider what happened on Feb. 27, for example.

The official high temperature for Des Moines registered as 53° (taken at the airport's ASOS station), yet many homeowners around the city measured temperatures in the mid to upper 50s.

There's actually an explanation for why these temperature readings are so variable.

RELATED: February 2021 tied for 6th-coldest on record in Des Moines

It's all about the location of the thermometer and how it's affected by nearby buildings or trees, elevation and direct or indirect sunlight.

At most ASOS and AWOS sites, thermometers are kept inside of a ventilated white box that's always shaded.

The white painting on the box reduces heat absorption so the temperature reading isn't skewed or given an extra boost from the sun's rays.

This box is also placed four feet above ground in an open field, so it's free from any noteworthy building or foliage influence.

🔧🔩Our technicians were out in the field recently doing an ASOS conduit refurbishment [ASOS stands for Automated Surface Observing Systems]. This equipment observes the weather across our area such as wind speed, visibility, temperature, rainfall, etc. https://t.co/AEB0fIB08u pic.twitter.com/CzpyugSvAZ

It's also important for the field to be as flat as possible, because significant changes in elevation, including hills or valleys, can cut down on the accuracy of a temperature measurement.

For temperature measurements taken at home, the number is often distorted, sometimes because the thermometer is receiving too much sunlight or because darker paint colors absorb even greater amounts of heat.

To get the most accurate temperature readings at home, it's best to place a thermometer on the north side of a home in a shaded area.

Grass and asphalt also absorb quite a bit of heat, which is why ASOS and AWOS temperature boxes are placed four feet above the ground.

Temperature recordings near the surface usually register a bit warmer than the actual air temperature due to that extra effect from the ground's heat absorption.

Sometimes the temperature reading inside a car can register much higher or lower than the official temperature outside.

Although the car's temperature may be correct given the effects of pavement and vehicle frame's heat absorption, it is not necessarily a good indication of the actual temperature outdoors.

Other factors can influence temperature measurements as well, such as a nearby body of water or an area of concentrated vegetation like a forest or heavily wooded area.

Overall, the temperatures measured at various locations are not necessarily incorrect for that particular area, but they may not be the best representations of the outdoor air temperature at any given point in time.

As temperatures continue to climb during the spring and summer months, especially on bright, sunny days, expect to see quite a bit of variation in recorded temperatures here in central Iowa.