Around 330 students and 50 staff members were displaced. First-year teacher Katie Hedegaard said she had just finished setting up her classroom before it started 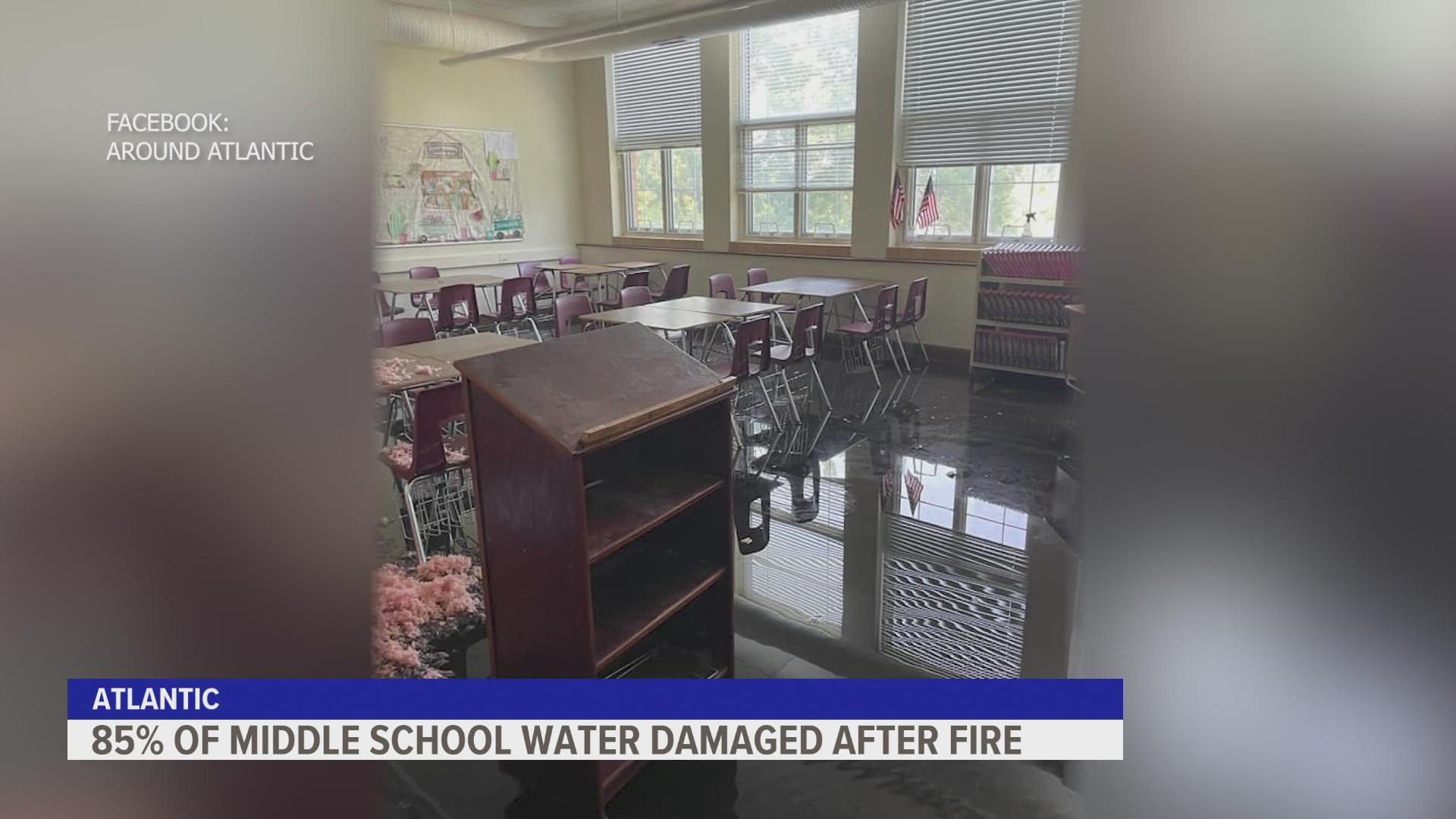 ATLANTIC, Iowa — It is not known exactly when Atlantic Middle School students and staff will be able to go back into their building after a fire caused significant damage last week, according to the district's superintendent.

Superintendent Steve Barber said about 85% of the school had water damage from crews putting out the flames.

Due to those damages, Barber said classes will not be held in the building when school starts on Aug. 23.

"So we had to put a plan together," Barber said. "[The fire] displaced about 330 students, grades six through eight, and approximately 50 adults— staff and support staff."

RELATED: Atlantic Middle School students will not return to building this fall after fire

That's why the Atlantic School Board held an emergency meeting Tuesday night to approve plans to relocate students and staff.

Students who typically learn at the EOC will be relocated to Iowa Western Community College in Atlantic and an additional community building.

TONIGHT AT 10 on @weareiowa5news: 85% of Atlantic Middle School was water damaged after a fire July 27. Students will be relocated during the first few weeks of the upcoming school year, and superintendent Steven Barber says maybe even *all* year long. pic.twitter.com/mV3nr2ak3V

First-year teacher Katie Hedegaard, who just graduated from the University of Iowa, had finished setting up her seventh-grade English classroom when the principal notified her of the fire and they evacuated.

"That was really shocking for me, I didn't know what to do with myself for the day," Hedegaard said. "But there's been a lot of people who have been wanting to help and support me."

Some of her own childhood books were in her classroom as well as a sign that said "Ms. Hedegaard."

Hedegaard hasn't seen what her classroom looks like in person, yet. She did say all but two or three classrooms suffered some sort of damage.

Katie Hedegaard is a 2021 graduate from @uiowa. She finished up setting up her 7th grade English classroom at Atlantic Middle School the day the fire happened. She now lost access to everything, including some of her own childhood books. "I didn't know what to do with myself." pic.twitter.com/AviEI9AOuj

"Our number one goal is to serve our kids. Our experience with online learning last year was not good," Barber said. "It put extra stress on our teachers. We agreed right way that, for the well-being of our kids, we need to put them in front of a teacher."

Barber didn't give an exact dollar amount on how much the damages will cost, but he did say the expenses will be adding up over time.

"We're very fortunate to have a quality team taking care of our old building, getting back to normal as fast as possible," Barber said.

Cleaning up after the fire is already in the works. Barber said crews told the district to "plan on being out of there for the whole year."

"So that's what we're planning. And if we get in there before that, that's just going to be something that the community can celebrate," Barber said.