The 23rd-ranked Cyclones gave up two return touchdowns in the loss. 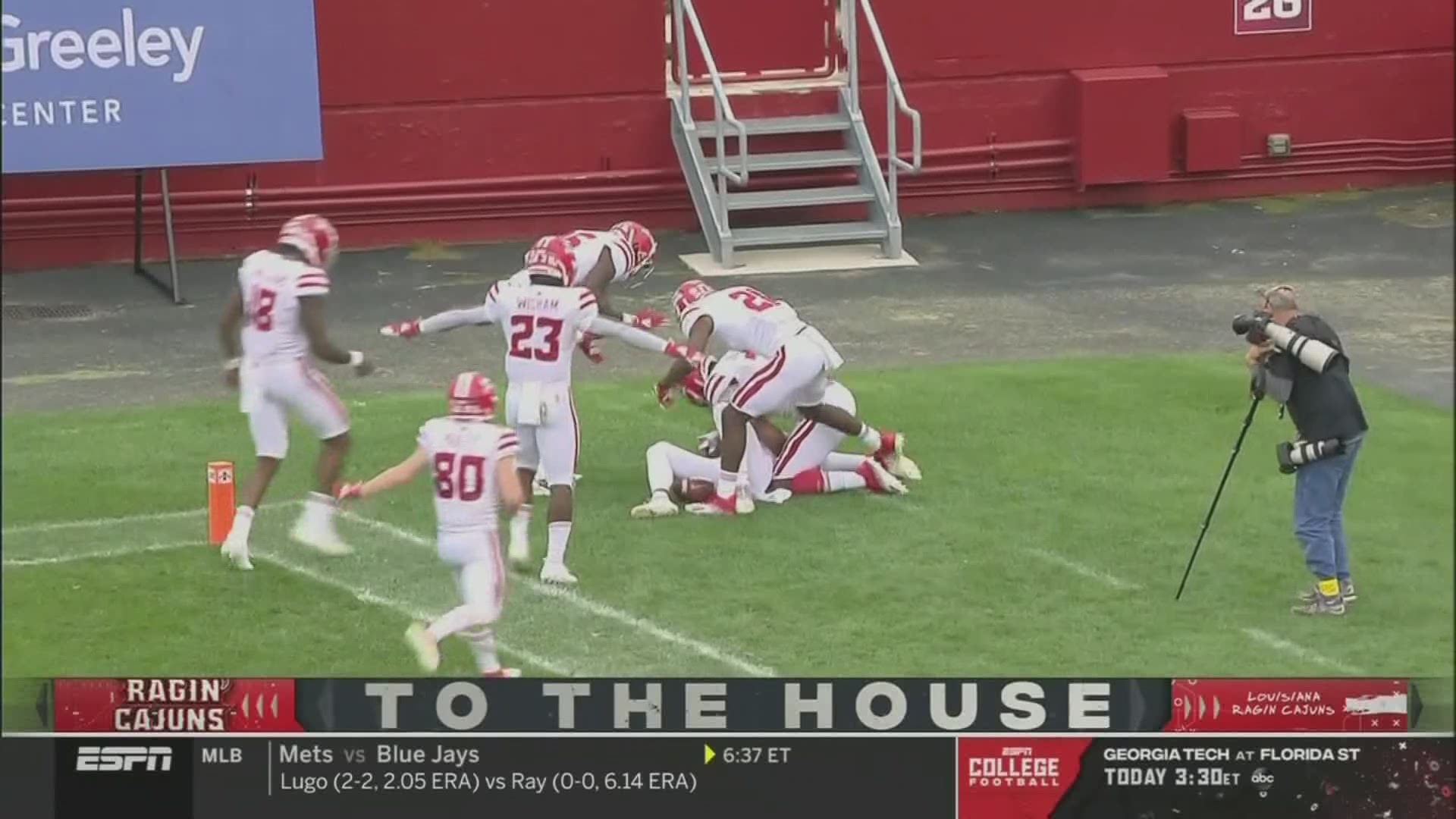 AMES, Iowa — The 23rd-ranked Iowa State Cyclones opened their season with a blemish on their record, losing to non-conference foe Louisiana by three scores, 31-14.

The Cyclones have next week off before starting Big 12 play on the road against TCU on Sept. 26.

Local 5 will provide updates on ISU games throughout the season. Be sure to follow Sports Director Jon Schaeffer on Twitter.

Stats can be viewed here

—The Big 12 has secured access to COVID-19 testing that produces rapid results and will be used the day before competition on players, coaches and staff

—The Cyclones' 2020 schedule will be a "9+1" model, meaning Louisiana will be the team's only non-conference opponent; for a complete season schedule for ISU, click here

Louisiana punches it in on a two yard run. Trey Ragas is in. 31-14 Louisiana. That'll do it.

Iowa State couldn't muster any offense in the second half. Special teams failures doomed ISU, and Louisiana will upset the #23 Cyclones in Ames today. Disappointing start for Matt Campbell's team. They have two weeks to reset before #Big12FB play starts on the 26th

Chris Smith with an 8 yard run on second down. UL inside the Cyclones' 5.

3rd and 7: UL with a run right up the gut from Elijah Mitchell. That's a first down.

4th and 5: Iowa State has to go for it. Pass broken up on the attempt to Chase Allen. That's a turnover on downs. Not looking good for ISU.

Iowa State finally with some life offensively. will it be too little too late?

3rd and 8: Iowa State gets the stop they need. Greg Eisworth with the tackle will force a UL punt.

ISU can't convert, they punt it away. ISU Defense needs to make a stop as UL starts at their own 12-yard line.

Iowa State continues to struggle to move the ball down field. They'll be looking at a 3rd and 10.

ISU forced to punt with their first possession of the 4th quarter. Jamal Bell with the house call for Louisiana goes 83-yards on the punt return for a Touchdown. 24-14 UL.

Lewis hits Peter Leblanc on the 78-yard connection. That's a Louisiana touchdown and the Ragin' Cajuns take a 17-14 lead. Lewis had just 74-yards passing before the 78-yard TD.

3rd and 8: Louisiana on the Cyclones 12-yard line. Iowa State comes up with a big stop, which will force a field goal try for the Ragin' Cajuns.

3rd-and 16: Brock Purdy forces a pass that is picked off. Louisiana ball on the Cyclones' 14.

Iowa State has gone backwards on back-to-back plays now 3rd and 16 on their own 4.

Will McDonald with the sack on third down. Forces a Louisiana punt

1st and 10: Joshua Bailey with the TFL on the carrie by Trey Ragas. Loss of 2

4th and 5: Iowa State going for it. Louisiana holds and it's a turnover on downs.

There's that patented pump fake from Brock Purdy: He picks up a first down for Iowa State. 15-yard run.

JON SCHAEFFER: Iowa State was sluggish to start. It's very typical of what we have seen from Iowa State in years past in their opening game. The Cyclones found a rhythm on offense in the second quarter, but will need to stay mistake free the rest of the way. A fumble, and kickoff return for a touchdown have kept Louisiana in this game as we sit 14-10 at half.

It's halftime in Ames.

Cyclones will receive the second half kickoff.

Louisiana starts the drive at the 27-yard line.

Breece Hall with the 11-yard run for the touchdown. That puts Iowa State on top 14-7.

Brock Purdy connects with Chase Allen for a first down

Pass Interference on Louisiana gives Iowa State a first down. They're set up at the 33 of the Ragin' Cajuns.

The Cyclones will start the drive at the 33-yard line.

JON SCHAEFFER: Iowa State showing that rust especially in tackling. It's been a common theme to start the season for all teams at the beginning of the year.

I handed the live blog off to @J_SchaefferWOI and Lousiana returns the kickoff 95 yards for a TD. I'm sorry, #CyclONEnation 😶 https://t.co/Q6ompdHaZV

Ensuing kickoff Ragin' Cajuns get on the board. Chris Smith with the kickoff return for a touchdown. 7-7

Kene Nwangwu punches it in and Iowa State has their first touchdown of 2020. 7-0 ISU after the PAT #Clones @weareiowa5news #Local5Sports

Kene Nwangwu is in on a 1-yard touchdown run! Cyclones are on the board. PAT is good. ISU with a 7-0 lead.

Breece Hall breaks through for a first down. He loses the ball but he is ruled down. 1st-and-goal Cyclones.

3rd-and-6 pass goes to Milton and he spins down the sidelines for a first down.

Another Breece Hall run. He has nine rushes so far for 57 yards.

Breece Hall gains 18 on a 3rd-and-7 for the Cyclones. Huge play to bring the ball inside the Lousiana 30.

Pressure forces a quick throw from Levi Lewis, but it falls incomplete. A three-and-out for the ISU defense.

ESPN takes a moment to remember D.J. Looney, an assistant coach for the Ragin' Cajuns who died of a heart attack in August at the age of 31.

Going to miss this energy. pic.twitter.com/w1b5S2Mc1D

Punt is fair caught by Lousiana at the 12-yard line. Still scoreless.

A 6-yard run from Purdy pushes the Cyclones past midfield.

Kene Nwangwu comes up short on a 3rd-and-2 run. Cyclones convert a 4th-and-1 with a Purdy QB sneak.

Purdy converts a 3rd-and-9 pass to Xavier Hutchinson after nearly throwing an interception the previous play.

3rd-and-goal run is stopped well short of a touchdown. Lousiana misses a field goal and the Cyclones will get the ball back. Still no score.

JaQuan Bailey with a huge tackle for loss on 2nd-and-goal. A loss of 7 for Lousiana. That will end the first quarter.

RB Trey Ragas bounces it to the outside for a 7-yard gain. Another 3rd-and-1. They hurry it up and feed Ragas again. Now 1st-and-goal.

Lousiana runs it on 3rd-and-7 and converts. Ragin' Cajuns down to the ISU 32.

Lousiana converts a 3rd-and-12 on a RB screen to RB Elijah Mitchell. They're into ISU territory.

Lewis rolls out on play action but DL Latrell Bankston gets the sack.

Breece Hall shoots up the middle for a run but fumbles the ball. Lousiana recovers it.

Punt is out of bounds at the Cyclone 43-yard line. Second drive coming up for Brock Purdy and company.

Punt is downed inside the 15. Ragin' Cajuns will take over for their second drive of the game.

Purdy misses Hutchinson again on a 3rd-and-6 throw. Cyclones will have to punt from the Lousiana side of the field.

Purdy takes his first deep shot of the game but it's incomplete. Intended for WR Xavier Hutchinson.

Cyclones are into Lousiana territory and convert a 3rd-and-1. Both offenses playing an up-tempo style so far.

ISU takes over after the punt on their own 16-yard line. First two plays for the Cyclone offense are a 5-yard run for RB Breece Hall and a 10-yard completion to WR Sean Shaw.

Lousiana is able to convert one third down, but their drive stalls out after pressure forces QB Levi Lewis out of bounds.

Iowa State kicks off to Lousiana, and we are underway! ESPN broadcast notes the Ragin' Cajuns were sixth in the country last year in rushing offense.

Thanks to ⁦@ISUCFVMB⁩ for giving us a great atmosphere today pic.twitter.com/svlZXkCdsq